Preparation and Characterization of Highly Fluorescent, Glutathione-coated Near Infrared Quantum Dots for in Vivo Fluorescence Imaging
Next Article in Special Issue

Fumonisins, Trichothecenes and Zearalenone in Cereals
Previous Article in Journal

Antibody-mediated Prevention of Fusarium Mycotoxins in the Field

Two morphologically different Aspergillus parasiticus strains, one producing aflatoxins, abundant conidia but few sclerotia (BN9) and the other producing O-methylsterimatocystin (OMST), copious sclerotia but a low number of conidia (RH), were used to assess the role of crzA which encodes a putative calcium-signaling pathway regulatory protein. Under standard culture conditions, BN9ΔcrzA mutants conidiated normally but decreased slightly in radial growth, regardless of illumination conditions. RHΔcrzA mutants produced only conidia under light and showed decreased conidiation and delayed sclerotial formation in the dark. Regulation of conidiation of both A. parasiticus strains by light was independent of crzA. Increased concentrations of lithium, sodium, and potassium impaired conidiation and sclerotial formation of the RHΔcrzA mutants but they did not affect conidiation of the BN9ΔcrzA mutants. Vegetative growth and asexual development of both ΔcrzA mutants were hypersensitive to increased calcium concentrations. Calcium supplementation (10 mM) resulted in 3-fold and 2-fold decreases in the relative expression of the endoplasmic reticulum calcium ATPase 2 gene in the BN9 and RH parental strains, respectively, but changes in both ΔcrzA mutants were less significant. Compared to the parental strains, the ΔcrzA mutants barely produced aflatoxins or OMST after the calcium supplementation. The relative expression levels of aflatoxin biosynthesis genes, nor1, ver1, and omtA, in both ΔcrzA mutants were decreased significantly, but the decreases in the parental strains were at much lower extents. CrzA is required for growth and development and for aflatoxin biosynthesis under calcium stress conditions. View Full-Text
Keywords: Aspergillus parasiticus; aflatoxin biosynthesis; endoplasmic reticulum calcium ATPase; crzA; calcium homeostasis Aspergillus parasiticus; aflatoxin biosynthesis; endoplasmic reticulum calcium ATPase; crzA; calcium homeostasis
►▼ Show Figures 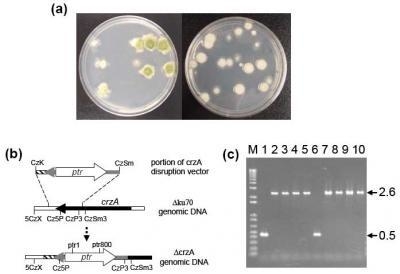