Submit to Diversity Review for Diversity 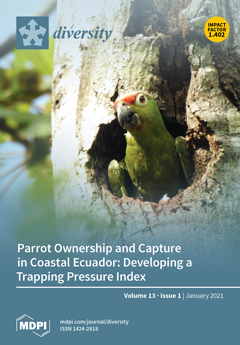 Cover Story (view full-size image): Parrots are one of most threatened and rapidly declining bird groups. One reason for this is the global demand for pet parrots. Wild parrots are frequently trapped to fulfil this demand, and trapping pressure is likely to vary across a species range depending on factors such as demand, accessibility, and availability. Amazona lilacina is a newly described critically endangered species endemic to coastal Ecuador. Together with Ecuadorian researchers and rural communities, we quantified the level of A. lilacina ownership and trapping throughout its range and developed a trapping pressure index to highlight the areas of greatest risk to the wild population. View this paper.
Previous Issue
Volume 12, December
Next Issue
Volume 13, February
We use cookies on our website to ensure you get the best experience. Read more about our cookies here.
Accept
We have just recently launched a new version of our website. Help us to further improve by taking part in this short 5 minute survey here. here.
Never show this again