The Effect of Climate and Human Pressures on Functional Diversity and Species Richness Patterns of Amphibians, Reptiles and Mammals in Europe
Next Article in Special Issue

Respiration Rates, Metabolic Demands and Feeding of Ephyrae and Young Medusae of the Rhizostome Rhopilema nomadica
Previous Article in Journal

Genetic, but Not Behavioral, Evidence Supports the Distinctiveness of the Mealy Amazon Parrot in the Brazilian Atlantic Forest
Previous Article in Special Issue

Science is addressing global societal challenges, and due to limitations in research financing, scientists are turning to the public at large to jointly tackle specific environmental issues. Citizens are therefore increasingly involved in monitoring programs, appointed as citizen scientists with potential to delivering key data at near to no cost to address environmental challenges, therein fostering scientific knowledge and advising policy- and decision-makers. One of the first and most successful examples of marine citizen science in the Mediterranean is represented by the integrative and collaborative implementation of several jellyfish-spotting campaigns in Italy, Spain, Malta, and Tunisia starting in 2009. Altogether, in terms of time coverage, geographic extent, and number of citizen records, these represent the most effective marine citizen science campaigns thus far implemented in the Mediterranean Sea. Here, we analyzed a collective database merging records over the above four countries, featuring more than 100,000 records containing almost 25,000 observations of jellyfish specimens collected over a period of 3 to 7 years (from 2009 to 2015) by citizen scientists participating in any of the national citizen science programs included in this analysis. Such a wide citizen science exercise demonstrates a valuable and cost-effective tool to understanding ecological drivers of jellyfish proliferation over the Western and Central Mediterranean basins, as well as a powerful contribution to developing tailored adaptation and management strategies; mitigating jellyfish impacts on human activities in coastal zones; and supporting implementation of marine spatial planning, Blue Growth, and conservation strategies. View Full-Text
Keywords: gelatinous zooplankton; scyphozoa; Pelagia noctiluca; Rhizostoma pulmo; forecasting system; mitigation tool; coastal zone management gelatinous zooplankton; scyphozoa; Pelagia noctiluca; Rhizostoma pulmo; forecasting system; mitigation tool; coastal zone management
►▼ Show Figures 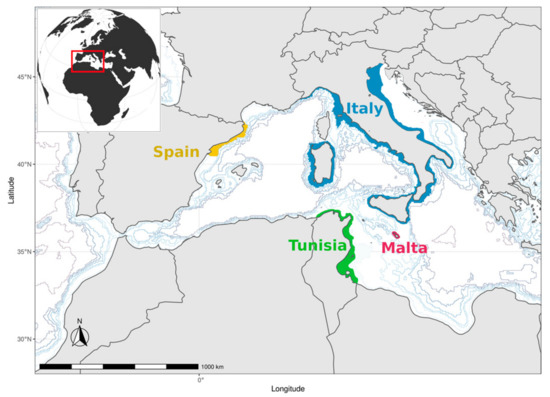 Alan Deidun
Prof. Alan Deidun, a marine biologist by training, is Malta’s first-ever Ocean Ambassador and, as of September 2019, is a member of the EU Commission’s Ocean Mission Board (Starfish Mission). He directs the Malta Training Centre of the International Ocean Institute (IOI) and is a Fellow of the Royal Society of Biology (London). He is also a Full Professor within the Faculty of Science of the University of Malta. Prof. Alan Deidun has published over 150 peer-reviewed papers and contributions in high-profile academic journals as well as in conference proceedings, and his academic work has currently been cited over 2000 times. He has penned a fortnightly newspaper column in The Sunday Times of Malta since March 2002, having been bestowed with the national environmental journalism award on six different occasions for such efforts, as well as the national Order of Merit in December 2020.
Zoom | Orient | As Lines | As Sticks | As Cartoon | As Surface | Previous Scene | Next Scene
We use cookies on our website to ensure you get the best experience. Read more about our cookies here.
Accept
We have just recently launched a new version of our website. Help us to further improve by taking part in this short 5 minute survey here. here.
Never show this again