Up until the first half of the 20th century, silver found significant employment in medical applications, particularly in the healing of open wounds, thanks to its antibacterial and antifungal properties. Wound repair is a complex and dynamic biological process regulated by several pathways that cooperate to restore tissue integrity and homeostasis. To facilitate healing, injuries need to be promptly treated. Recently, the interest in alternatives to antibiotics has been raised given the widespread phenomenon of antibiotic resistance. Among these alternatives, the use of silver appears to be a valid option, so a resurgence in its use has been recently observed. In particular, in contrast to ionic silver, colloidal silver, a suspension of metallic silver particles, shows antibacterial activity displaying less or no toxicity. However, the human health risks associated with exposure to silver nanoparticles (NP) appear to be conflicted, and some studies have suggested that it could be toxic in different cellular contexts. These potentially harmful effects of silver NP depend on various parameters including NP size, which commonly range from 1 to 100 nm. In this study, we analyzed the effect of a colloidal silver preparation composed of very small and homogeneous nanoparticles of 0.62 nm size, smaller than those previously tested. We found no adverse effect on the cell proliferation of HaCaT cells, even at high NP concentration. Time-lapse microscopy and indirect immunofluorescence experiments demonstrated that this preparation of colloidal silver strongly increased cell migration, re-modeled the cytoskeleton, and caused recruitment of E-cadherin at cell-cell junctions of human cultured keratinocytes. View Full-Text
Keywords: colloidal silver; wound healing; E-cadherin; keratinocytes; nanoparticles; skin colloidal silver; wound healing; E-cadherin; keratinocytes; nanoparticles; skin
►▼ Show Figures 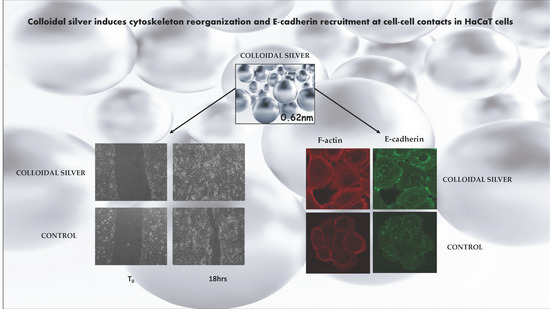