Antimicrobial peptides (AMPs) have been identified as a potentially new class of antibiotics to combat bacterial resistance to conventional drugs. The design of de novo AMPs with high therapeutic indexes, low cost of synthesis, high resistance to proteases and high bioavailability remains a challenge. Such design requires computational modeling of antimicrobial properties. Currently, most computational methods cannot accurately calculate antimicrobial potency against particular strains of bacterial pathogens. We developed a tool for AMP prediction (Special Prediction (SP) tool) and made it available on our Web site (https://dbaasp.org/prediction). Based on this tool, a simple algorithm for the design of de novo AMPs (DSP) was created. We used DSP to design short peptides with high therapeutic indexes against gram-negative bacteria. The predicted peptides have been synthesized and tested in vitro against a panel of gram-negative bacteria, including drug resistant ones. Predicted activity against Escherichia coli ATCC 25922 was experimentally confirmed for 14 out of 15 peptides. Further improvements for designed peptides included the synthesis of D-enantiomers, which are traditionally used to increase resistance against proteases. One synthetic D-peptide (SP15D) possesses one of the lowest values of minimum inhibitory concentration (MIC) among all DBAASP database short peptides at the time of the submission of this article, while being highly stable against proteases and having a high therapeutic index. The mode of anti-bacterial action, assessed by fluorescence microscopy, shows that SP15D acts similarly to cell penetrating peptides. SP15D can be considered a promising candidate for the development of peptide antibiotics. We plan further exploratory studies with the SP tool, aiming at finding peptides which are active against other pathogenic organisms. View Full-Text
Keywords: antimicrobial peptides; predictive models; drug design antimicrobial peptides; predictive models; drug design
►▼ Show Figures 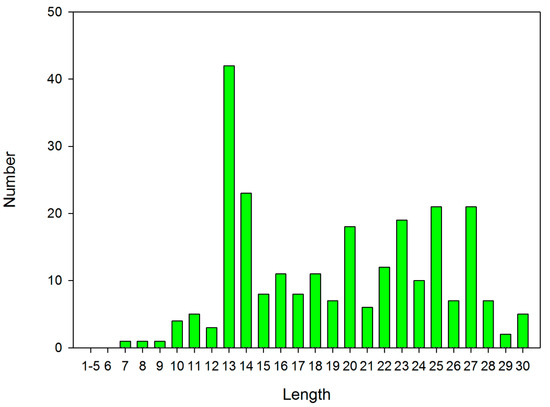