Alginate Nanoformulation: Influence of Process and Selected Variables
Next Article in Special Issue

Ayahuasca is a hallucinogenic botanical beverage originally used by indigenous Amazonian tribes in religious ceremonies and therapeutic practices. While ethnobotanical surveys still indicate its spiritual and medicinal uses, consumption of ayahuasca has been progressively related with a recreational purpose, particularly in Western societies. The ayahuasca aqueous concoction is typically prepared from the leaves of the N,N-dimethyltryptamine (DMT)-containing Psychotria viridis, and the stem and bark of Banisteriopsis caapi, the plant source of harmala alkaloids. Herein, the toxicokinetics and toxicodynamics of the psychoactive DMT and harmala alkaloids harmine, harmaline and tetrahydroharmine, are comprehensively covered, particularly emphasizing the psychological, physiological, and toxic effects deriving from their concomitant intake. Potential therapeutic utility, particularly in mental and psychiatric disorders, and forensic aspects of DMT and ayahuasca are also reviewed and discussed. Following administration of ayahuasca, DMT is rapidly absorbed and distributed. Harmala alkaloids act as potent inhibitors of monoamine oxidase A (MAO-A), preventing extensive first-pass degradation of DMT into 3-indole-acetic acid (3-IAA), and enabling sufficient amounts of DMT to reach the brain. DMT has affinity for a variety of serotonergic and non-serotonergic receptors, though its psychotropic effects are mainly related with the activation of serotonin receptors type 2A (5-HT2A). Mildly to rarely severe psychedelic adverse effects are reported for ayahuasca or its alkaloids individually, but abuse does not lead to dependence or tolerance. For a long time, the evidence has pointed to potential psychotherapeutic benefits in the treatment of depression, anxiety, and substance abuse disorders; and although misuse of ayahuasca has been diverting attention away from such clinical potential, research onto its therapeutic effects has now strongly resurged. View Full-Text
Keywords: hallucinogens; metabolism; phytotherapy; recreational drugs hallucinogens; metabolism; phytotherapy; recreational drugs
►▼ Show Figures 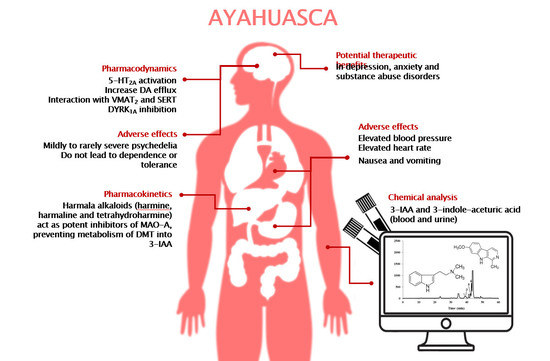