Two Examples of RNA Aptamers with Antiviral Activity. Are Aptamers the Wished Antiviral Drugs?
Next Article in Special Issue

Substance Use Disorder in the COVID-19 Pandemic: A Systematic Review of Vulnerabilities and Complications

Autophagy as a Potential Therapy for Malignant Glioma

Glioma is the most frequent and aggressive type of brain neoplasm, being anaplastic astrocytoma (AA) and glioblastoma multiforme (GBM), its most malignant forms. The survival rate in patients with these neoplasms is 15 months after diagnosis, despite a diversity of treatments, including surgery, radiation, chemotherapy, and immunotherapy. The resistance of GBM to various therapies is due to a highly mutated genome; these genetic changes induce a de-regulation of several signaling pathways and result in higher cell proliferation rates, angiogenesis, invasion, and a marked resistance to apoptosis; this latter trait is a hallmark of highly invasive tumor cells, such as glioma cells. Due to a defective apoptosis in gliomas, induced autophagic death can be an alternative to remove tumor cells. Paradoxically, however, autophagy in cancer can promote either a cell death or survival. Modulating the autophagic pathway as a death mechanism for cancer cells has prompted the use of both inhibitors and autophagy inducers. The autophagic process, either as a cancer suppressing or inducing mechanism in high-grade gliomas is discussed in this review, along with therapeutic approaches to inhibit or induce autophagy in pre-clinical and clinical studies, aiming to increase the efficiency of conventional treatments to remove glioma neoplastic cells. View Full-Text
Keywords: autophagy; glioma; chemotherapy autophagy; glioma; chemotherapy
►▼ Show Figures 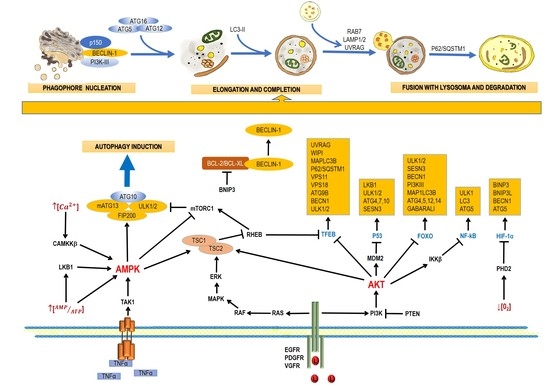