Gold Nanoparticles: A New Golden Era in Oncology?
Next Article in Special Issue

Echinacea purpurea (L.) Moench: Chemical Characterization and Bioactivity of Its Extracts and Fractions

Profile and Content of Phenolic Compounds in Leaves, Flowers, Roots, and Stalks of Sanguisorba officinalis L. Determined with the LC-DAD-ESI-QTOF-MS/MS Analysis and Their In Vitro Antioxidant, Antidiabetic, Antiproliferative Potency

The aim of this study was to accurately determine the profile of polyphenols using the highly sensitive LC-DAD-ESI-QTOF-MS/MS technique and to determine in vitro antioxidant activity, the ability of inhibition of α-amylase, α-glucoamylase, and pancreatic lipase activity, and antiproliferative activity in leaves, flowers, roots, and stalks of medical plant Sanguisorba officinalis L. The results of the analysis of the morphological parts indicated the presence of 130 polyphenols, including 62 that were detected in S. officinalis L. for the first time. The prevailing group was tannins, with contents ranging from 66.4% of total polyphenols in the flowers to 43.3% in the stalks. The highest content of polyphenols was identified in the flowers and reached 14,444.97 mg/100 g d.b., while the lowest was noted in the stalks and reached 4606.33 mg/100 g d.b. In turn, the highest values of the antiradical and reducing capacities were determined in the leaves and reached 6.63 and 0.30 mmol TE/g d.b, respectively. In turn, a high ability to inhibit activities of α-amylase and α-glucoamylase was noted in the flowers, while a high ability to inhibit the activity of pancreatic lipase was demonstrated in the leaves of S. officinalis L. In addition, the leaves and the flowers showed the most effective antiproliferative properties in pancreatic ductal adenocarcinoma, colorectal adenocarcinoma, bladder cancer, and T-cell leukemia cells, whereas the weakest activity was noted in the stalks. Thus, the best dietetic material to be used when composing functional foods were the leaves and the flowers of S. officinalis L., while the roots and the stalks were equally valuable plant materials. View Full-Text
Keywords: in vitro biological activity; bioactive compounds; morphological parts; medical plant in vitro biological activity; bioactive compounds; morphological parts; medical plant
►▼ Show Figures 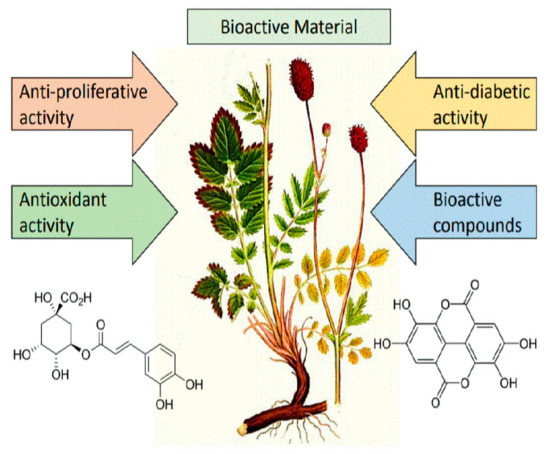 Lachowicz, S.; Oszmiański, J.; Rapak, A.; Ochmian, I. Profile and Content of Phenolic Compounds in Leaves, Flowers, Roots, and Stalks of Sanguisorba officinalis L. Determined with the LC-DAD-ESI-QTOF-MS/MS Analysis and Their In Vitro Antioxidant, Antidiabetic, Antiproliferative Potency. Pharmaceuticals 2020, 13, 191. https://0-doi-org.brum.beds.ac.uk/10.3390/ph13080191


Lachowicz S, Oszmiański J, Rapak A, Ochmian I. Profile and Content of Phenolic Compounds in Leaves, Flowers, Roots, and Stalks of Sanguisorba officinalis L. Determined with the LC-DAD-ESI-QTOF-MS/MS Analysis and Their In Vitro Antioxidant, Antidiabetic, Antiproliferative Potency. Pharmaceuticals. 2020; 13(8):191. https://0-doi-org.brum.beds.ac.uk/10.3390/ph13080191