Juvenile Hemochromatosis: A Case Report and Review of the Literature

Avermectins are a group of drugs that occurs naturally as a product of fermenting Streptomyces avermitilis, an actinomycetes, isolated from the soil. Eight different structures, including ivermectin, abamectin, doramectin, eprinomectin, moxidectin, and selamectin, were isolated and divided into four major components (A1a, A2a, B1a and B2a) and four minor components (A1b, A2b, B1b, and B2b). Avermectins are generally used as a pesticide for the treatment of pests and parasitic worms as a result of their anthelmintic and insecticidal properties. Additionally, they possess anticancer, anti-diabetic, antiviral, antifungal, and are used for treatment of several metabolic disorders. Avermectin generally works by preventing the transmission of electrical impulse in the muscle and nerves of invertebrates, by amplifying the glutamate effects on the invertebrates-specific gated chloride channel. Avermectin has unwanted effects or reactions, especially when administered indiscriminately, which include respiratory failure, hypotension, and coma. The current review examines the mechanism of actions, biosynthesis, safety, pharmacokinetics, biological toxicity and activities of avermectins. View Full-Text
Keywords: avermectins; antihelminthic; insecticidal; pharmacokinetics; Streptomyces avermitilis avermectins; antihelminthic; insecticidal; pharmacokinetics; Streptomyces avermitilis
►▼ Show Figures 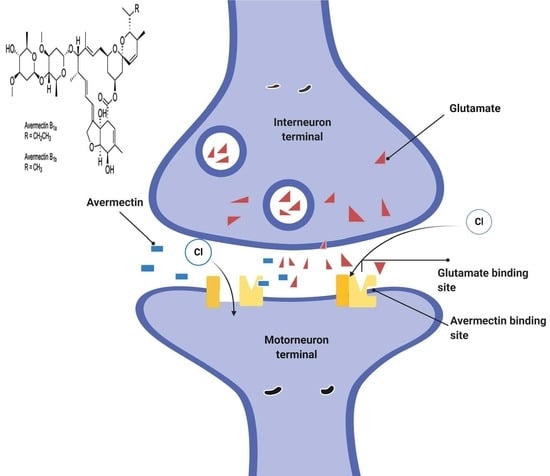