Pipecolisporin, a Novel Cyclic Peptide with Antimalarial and Antitrypanosome Activities from a Wheat Endophytic Nigrospora oryzae
Previous Article in Journal

Macrocyclic lactones (MLs) are widely used drugs to treat and prevent parasitic nematode infections. In many nematode species including a major pathogen of foals, Parascaris univalens, resistance against MLs is widespread, but the underlying resistance mechanisms and ML penetration routes into nematodes remain unknown. Here, we examined how the P-glycoprotein efflux pumps, candidate genes for ML resistance, can modulate drug susceptibility and investigated the role of active drug ingestion for ML susceptibility in the model nematode Caenorhabditis elegans. Wildtype or transgenic worms, modified to overexpress P. univalens PGP-9 (Pun-PGP-9) at the intestine or epidermis, were incubated with ivermectin or moxidectin in the presence (bacteria or serotonin) or absence (no specific stimulus) of pharyngeal pumping (PP). Active drug ingestion by PP was identified as an important factor for ivermectin susceptibility, while moxidectin susceptibility was only moderately affected. Intestinal Pun-PGP-9 expression elicited a protective effect against ivermectin and moxidectin only in the presence of PP stimulation. Conversely, epidermal Pun-PGP-9 expression protected against moxidectin regardless of PP and against ivermectin only in the absence of active drug ingestion. Our results demonstrate the role of active drug ingestion by nematodes for susceptibility and provide functional evidence for the contribution of P-glycoproteins to ML resistance in a tissue-specific manner. View Full-Text
Keywords: macrocyclic lactones; nematode; parasitology; P-glycoprotein; drug resistance; macrocyclic lactones; Caenorhabditis elegans macrocyclic lactones; nematode; parasitology; P-glycoprotein; drug resistance; macrocyclic lactones; Caenorhabditis elegans
►▼ Show Figures 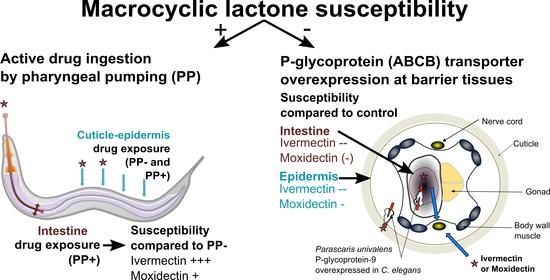