COVID-19 Vaccines: A Review of the Safety and Efficacy of Current Clinical Trials
Previous Article in Journal

Dengue fever is an arbovirus disease caused by infection with the dengue virus (DENV). Half of the world’s population lives under the threat of dengue fever, however, researchers have yet to develop any drugs that are clinically applicable to this infection. Micafungin is a member of the echinocandins family of anti-fungal drugs, capable of blocking the synthesis of β-1,3-D-glucan in the walls of fungal cells. Previous studies have demonstrated the effectiveness of Micafungin against infections of enterovirus 71 (EV71) and chikungunya virus (CHIKV). This is the first study demonstrating the effectiveness of micafungin in inhibiting the cytopathic effects of dengue virus serotype 2 (DENV-2) in a dose-dependent manner. Time-of-addition assays verified the inhibitory effects of micafungin in pre-treated, co-treated, and full-treatment groups. Binding and entry assays also demonstrated the effectiveness of micafungin in the early stage of DENV-2 infection. The virucidal efficacy of micafungin appears to lie in its ability to destroy the virion. Molecular docking assays revealed the binding of micafungin to the envelope protein of DENV-2, thereby revealing the mechanism by which micafungin affects the early stage of DENV infection and the stability of DENV. Two other micafungin analogs, caspofungin and anidulafungin, were also shown to have the antiviral effects on DENV-2. Finally, immunofluorescence assay (IFA) and reverse-transcription quantitative polymerase chain reaction (RT-qPCR) confirmed the broad anti-DENV ability of micafungin against dengue virus serotypes 1, 3, and 4 (DENV-1, DENV-3, and DENV-4). Taken together, these results demonstrate the potential of micafungin and its analogs as candidates for the development of broad-spectrum treatments for DENV infection. View Full-Text
Keywords: antiviral; dengue virus; micafungin; echinocandins; binding; entry and virucidal antiviral; dengue virus; micafungin; echinocandins; binding; entry and virucidal
►▼ Show Figures 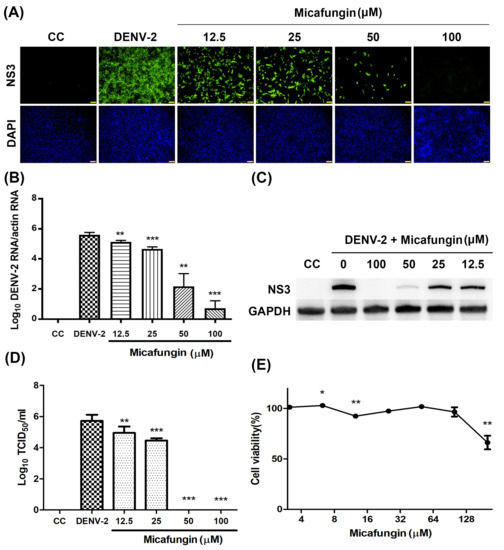