Comparison of Solution Chemical Properties and Biological Activity of Ruthenium Complexes of Selected β-Diketone, 8-Hydroxyquinoline and Pyrithione Ligands
Next Article in Special Issue

Background: Besifloxacin ophthalmic suspension 0.6% (w/v%) contains benzalkonium chloride (BAK) as a preservative. We evaluated the in vitro time-kill activity of besifloxacin, alone and in combination with BAK, against common bacteria implicated in ophthalmic infections. Methods: The activity of besifloxacin (100 µg/mL), BAK (10, 15, 20, and 100 µg/mL), and combinations of besifloxacin and BAK were evaluated against isolates of Staphylococcus epidermidis (n = 4), Staphylococcus aureus (n = 3), Haemophilus influenzae (n = 2), and Pseudomonas aeruginosa (n = 2) in time-kill experiments of 180 min duration. With the exception of one S. aureus isolate, all of the staphylococcal isolates were methicillin- and/or ciprofloxacin-resistant; one P. aeruginosa isolate was ciprofloxacin-resistant. The reductions in the viable colony counts (log10 CFU/mL) were plotted against time, and the differences among the time–kill curves were evaluated using an analysis of variance. Areas-under-the-killing-curve (AUKCs) were also computed. Results: Besifloxacin alone demonstrated ≥3-log killing of P. aeruginosa (<5 min) and H. influenzae (<120 min), and approached 3-log kills of S. aureus. BAK alone demonstrated concentration-dependent killing of S. epidermidis, S. aureus and H. influenzae, and at 100 µg/mL produced ≥3-log kills in <5 min against these species. The addition of BAK (10, 15, and 20 µg/mL) to besifloxacin increased the rate of killing compared to besifloxacin alone, with earlier 3-log kills of all species except P. aeruginosa and a variable impact on S. aureus. The greatest reductions in AUKC were observed among H. influenzae (8-fold) and S. epidermidis (≥5-fold). Similar results were found when the isolates were evaluated individually by their resistance phenotype. Conclusions: In addition to confirming the activity of 100 µg/mL BAK as a preservative in the bottle, these data suggest that BAK may help besifloxacin to achieve faster time-kills on-eye in the immediate timeframe post-instillation before extensive dilution against bacterial species implicated in ophthalmic infections, including drug-resistant S. epidermidis. Greater killing activity may help prevent resistance development and/or help treat resistant organisms. View Full-Text
Keywords: besifloxacin; benzalkonium chloride; in vitro; time-kill studies; ophthalmic infections; antibacterial resistance besifloxacin; benzalkonium chloride; in vitro; time-kill studies; ophthalmic infections; antibacterial resistance
►▼ Show Figures 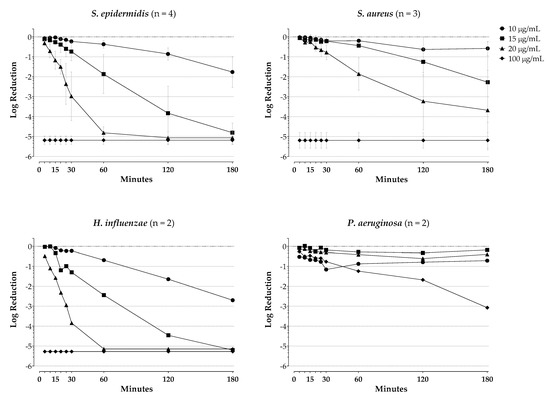