Acute lung injury (ALI) and acute respiratory distress syndrome (ARDS) cause thousands of deaths every year and are associated with high mortality rates (~40%) due to the lack of efficient therapies. Understanding the molecular mechanisms associated with those diseases will most probably lead to novel therapeutics. In the present study, we investigated the effects of the Hsp90 inhibitor AUY-922 in the major inflammatory pathways of mouse lungs. Mice were treated with LPS (1.6 mg/kg) via intratracheal instillation for 24 h and were then post-treated intraperitoneally with AUY-922 (10 mg/kg). The animals were examined 48 h after AUY-922 injection. LPS activated the TLR4-mediated signaling pathways, which in turn induced the release of different inflammatory cytokines and chemokines. AUY-922 suppressed the LPS-induced inflammation by inhibiting major pro-inflammatory pathways (e.g., JAK2/STAT3, MAPKs), and downregulated the IL-1β, IL-6, MCP-1 and TNFα. The expression levels of the redox regulator APE1/Ref1, as well as the DNA-damage inducible kinases ATM and ATR, were also increased after LPS treatment. Those effects were counteracted by AUY-922. Interestingly, this Hsp90 inhibitor abolished the LPS-induced pIRE1α suppression, a major component of the unfolded protein response. Our study elucidates the molecular pathways involved in the progression of murine inflammation and supports our efforts on the development of new therapeutics against lung inflammatory diseases and sepsis.
Keywords: acute lung injury; acute respiratory distress syndrome; Hsp90 inhibitor; P53; unfolded protein response acute lung injury; acute respiratory distress syndrome; Hsp90 inhibitor; P53; unfolded protein response

ERK1/2 is a member of the MAPK family, and it is activated through phosphorylation. Activation of ERK1/2 promotes the IL-1β -mediated pro-inflammatory IL-6 expression [28] and has been involved in chronic states of inflammation. Animals treated with LPS (1.6 mg/kg) for 24 h showed an elevation of the phosphorylated ERK1/2 expression levels in lung tissues as compared to the vehicle-treated mice. However, this activation was significantly decreased after AUY-922 treatment for 48 h (10 mg/kg). Mice treated with AUY-922 exerted a significant suppression of the ERK1/2 phosphorylation compared to the control group. The results are demonstrated in Figure 1A.

2.2. AUY-922 Counteracts the LPS-Induced Phosphorylation of the P38 MAPK Pathway

P38 kinases are activated in macrophages and endothelial cells by LPS and TNFα [29,30,31]. The phosphorylation of P38 MAPK causes its activation. Our results demonstrate that LPS treatment for 24 h at the dose of 1.6 mg/kg induced the phosphorylation or activation of the P38 MAPK pathway in the mouse lungs. Conversely, the AUY-922 (10 mg/kg)—treated mice exhibited a reduced activation of P38 compared to the LPS-treated mice. Mice treated with LPS for 24 h and post-treated with AUY-922 for 48 h exerted lower levels of phosphorylated P38 MAPK. That indicates the protective effects of AUY-922 against LPS-induced P38 MAPK activation. The results appear in Figure 1B.

The JAK2/STAT3 signaling pathway is involved in various biological processes including inflammation. The phosphorylation of STAT3 at Tyr705 and Ser727 is mediated by the receptor-associated tyrosine kinase JAK2, and both molecules are dephosphorylated by AUY-922 [32]. Our results (Figure 1C,D) suggest that the pro-inflammatory JAK2/STAT3 pathway was activated due to LPS treatment in the mouse lungs. Those effects were significantly suppressed in mice post-treated with AUY-922 for 48 h. The AUY-922-treated group that was not exposed to LPS showed a decrease in the activation of the JAK2/STAT3 pathway, as compared to the control and LPS-treated groups. Our results demonstrate that phospho (p)-JAK2 (Figure 1C) and phospho (p)-STAT3 (Figure 1D) levels were increased in the LPS-treated mice as compared to the vehicle (saline)-treated mice. The Hsp90 inhibitor opposed those events.

Cytokines and chemokines promote inflammation. The wild type C57BL/6 mice were subjected to LPS treatment for 24 h at the dose of 1.6 mg/kg, followed by post-treatment with AUY-922 (10 mg/kg) for 48 h. Our results demonstrate that LPS induced the expression of IL-1β (Figure 2A), IL-6 (Figure 2B), TNF-α (Figure 2D) and chemokine MCP-1 (Figure 2C) in the lungs. On the other hand, AUY-922 treatment significantly inhibited the LPS-induced expression of those cytokines and chemokines. Moreover, in the group of mice treated with AUY-922 (no LPS treatment), the expression levels of IL-1β were significantly reduced as compared to the control group.

2.5. LPS Induces the Expression Levels of APE1/Ref1 and AUY-922 Exerts the Opposite Effects

Apurinic/apyrimidinic endonuclease 1/ redox effector factor 1 (APE1/Ref1) is the upstream effector of vascular endothelial growth factor (VEGF), and it is strongly involved in the pathogenesis of various inflammatory diseases. This transcription factor regulates the expression of different immune responses and inflammatory mediators, including NF-kB, via a redox-based mechanism [33]. Mice treated with LPS for 24 h showed an increased level of APE1/Ref1 expression in the lungs. That effect may be due to the upregulation of oxidative stress and other inflammatory mediators by LPS. The induction of APE1/Ref1 by LPS was 1.7-fold higher than the control group. However, treatment with AUY-922 (10 mg/kg) for 48 h significantly suppressed the protein expression of APE1/Ref1. AUY-922 significantly counteracted the APE1/Ref1 levels in the LPS-treated mice (Figure 2E).

2.6. AUY-922 Suppresses the Levels of the LPS-Induced ATR Phosphorylation

Our previous observations revealed that the anti-inflammatory and barrier-enhancing effects of Hsp90 inhibitors are associated with the induction of P53. Several studies reported the degradation of P53 due to its phosphorylation [34]. This protein is also the downstream target of DNA-damage inducible kinases ATM and ATR. ATR phosphorylation activates different cell cycle checkpoint kinases. The expression levels of phosphorylated ATR in the LPS-treated mice group is 2.1-fold higher compared to its littermate control group. Those levels were significantly reduced after treatment with AUY-922 for 48 h. AUY-922 substantially suppressed the ATR phosphorylation. The results appear in Figure 3A.

2.7. AUY-922 Reduces the Expression Levels of the Phosphorylated ATM

The AMP-activated protein kinase (AMPK) is involved in the regulation of various important physiological functions, such as endothelial cell energy supply and endothelial NOS activation [36], and induces P53 [36,37]. Hence, phosphorylation of AMPK supports endothelial integrity and represents a promising strategy for the protection of the vascular endothelial barrier function. In this study, mice treated with LPS for 24 h showed a significant reduction in the phosphorylation and activation of AMPK. The LPS-induced suppression of AMPK was counteracted by the AUY-922 treatment (48 h) (Figure 3C).

IRE1α is the most conserved sensor of UPR signaling. Upon dissociation from BiP, it homodimerizes and autophosphorylates to trigger downstream signaling mechanisms. Mice treated with AUY-922 for 48 h exerted increased levels of phosphorylated IRE1α (activated form) expression as compared to the vehicle-treated group (Figure 3D). Moreover, LPS suppressed the phosphorylation of IRE1α, an effect opposed by AUY-922 (Figure 3E).

Seven-week-old C57BL/6 (male) mice were purchased from Envigo (Indianapolis, IN). They were maintained in a 12:12-h light/dark cycle, in pathogen-free conditions. The temperature was controlled (22–24 °C), as well as the humidity (50–60%). All experimental procedures were approved by the University of Louisiana Monroe Institutional Animal Care and Use Committee (IACUC) (19JUN-NB-01) and were in line with the principles of human animal care adopted by the American Physiological Society.

RIPA buffer and EZBlockTM block protease inhibitor cocktail were used to isolate the proteins from homogenized lung tissues. The protein concentration was measured using the BCA protein assay method. Proteins were separated according to their molecular weight by electrophoresis onto sodium dodecyl sulfate (SDS-PAGE) Tris-HCl gels. A wet transfer technique was used to transfer the proteins onto nitrocellulose membranes. All the membranes were incubated for 1 h at room temperature in a solution of 5% non-fat dry milk and subsequently, exposed to appropriate primary antibodies (1:1000) at 4 °C overnight. The following day, membranes were incubated with the corresponding HRP-linked secondary antibodies (1:2000). Protein bands were detected by the SuperSignal™ West Pico PLUS chemiluminescent substrate (PI34578). The images of the protein bands were captured in a ChemiDoc™ Touch Imaging System from Bio-Rad (Hercules, CA, USA). β-actin was the loading control unless stated otherwise in the densitometry graph. All reagents were obtained from VWR (Radnor, PA, USA).

Image J software (NIH) was utilized to perform the densitometry of the immunoblots. All data are expressed as mean values ± SEM (standard error of the mean). The Student’s t-test was used to determine statistically significant differences in protein expression among the groups. Bodyweight and BALF protein concentration data were analyzed by one-way ANOVA with the post hoc Dunnett test for the comparison of the treatment groups and the control group. A value of p < 0.05 was considered significant. GraphPad Prism (version 5.01) was used to analyze the data. The letter n represents the number of experimental repeats.

Our work substantiates our ongoing efforts on the elucidation of the mechanisms involved in the protective activities of Hsp90 inhibitors in inflamed tissues, and suggest that those compounds may deliver novel therapeutic possibilities against lung inflammatory diseases and sepsis.

All animal procedures were approved by the University of Louisiana Monroe Institutional Animal Care and Use Committee (IACUC) (19JUN-NB-01) on 12 June 2019. 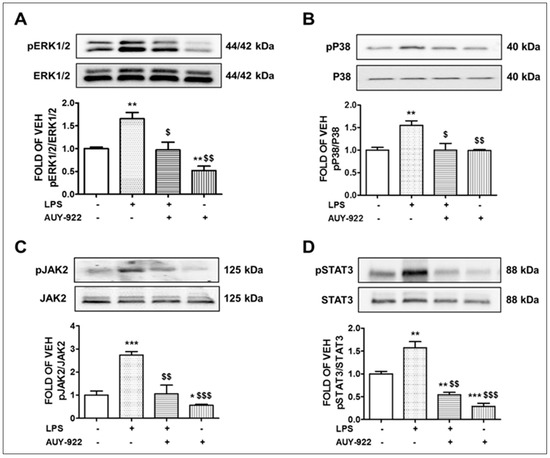 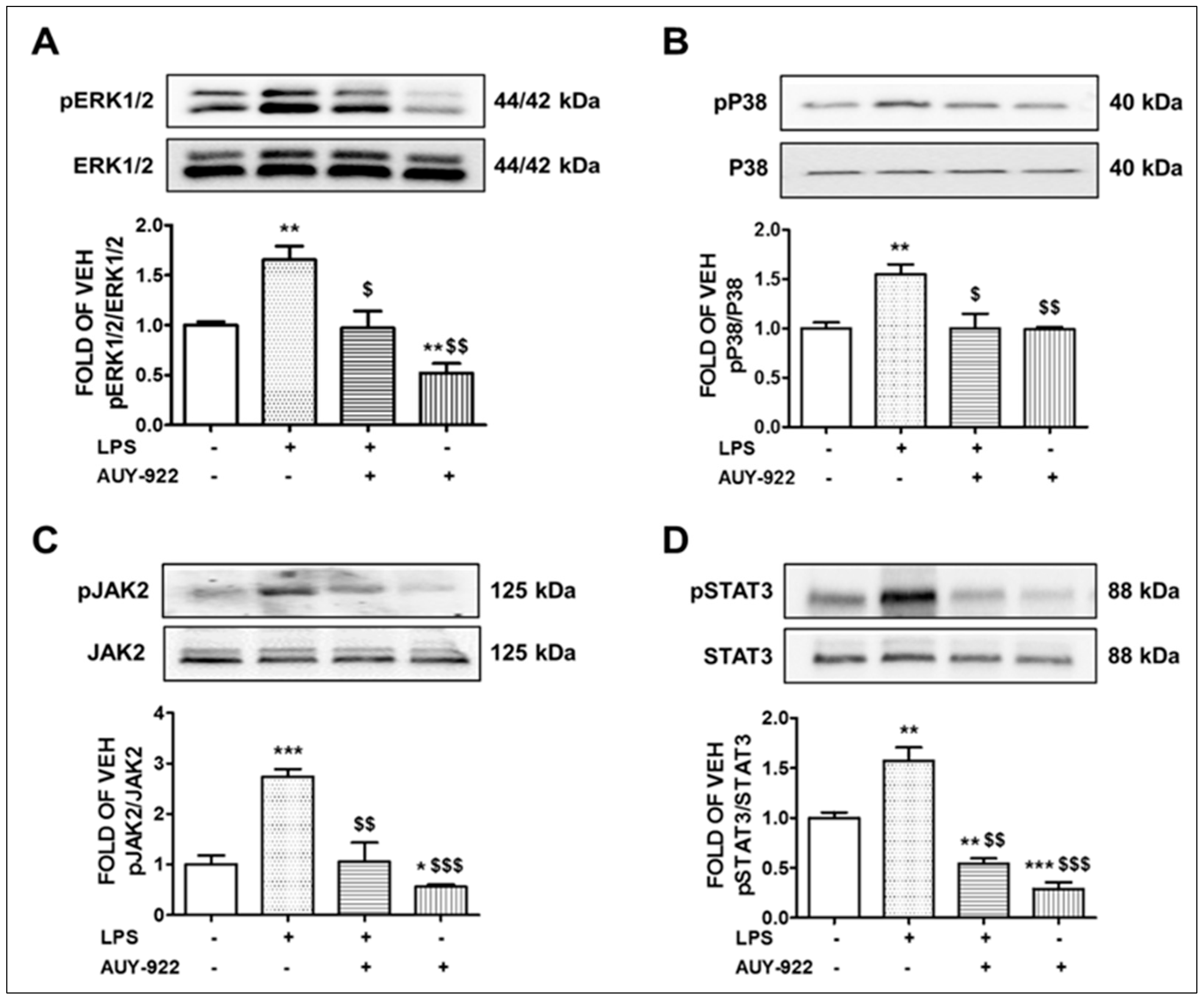 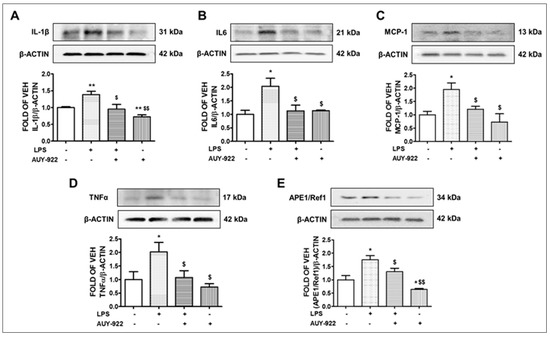 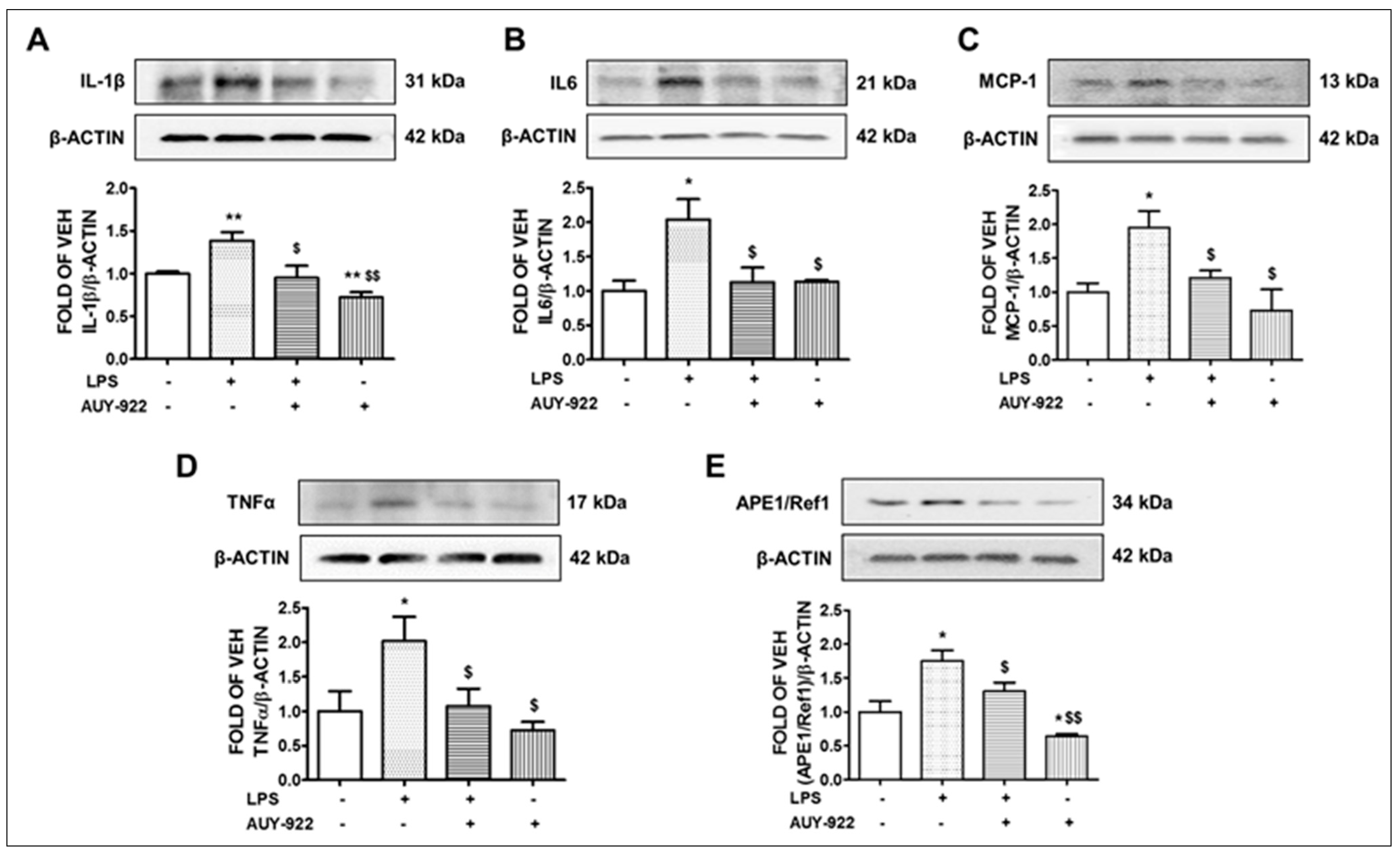 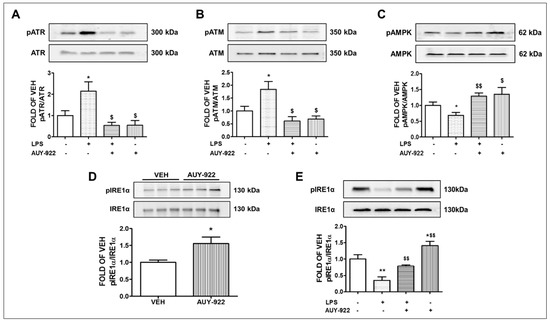 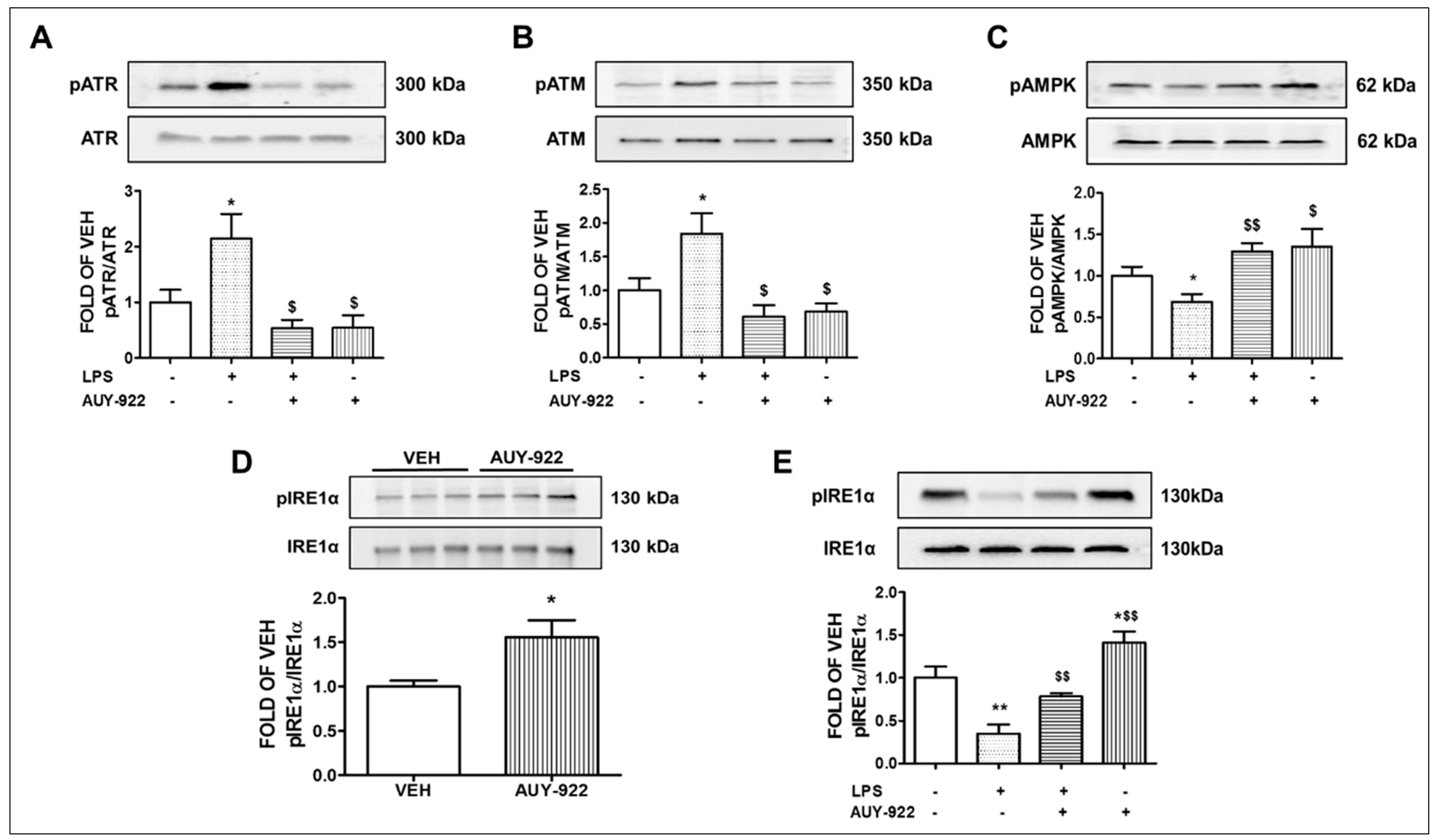