Meta-Assessment of Metformin Absorption and Disposition Pharmacokinetics in Nine Species

The objective of this study was to systematically assess literature datasets and quantitatively analyze metformin PK in plasma and some tissues of nine species. The pharmacokinetic (PK) parameters and profiles of metformin in nine species were collected from the literature. Based on a simple allometric scaling, the systemic clearances () of metformin in these species highly correlate with body weight () (R2 = 0.85) and are comparable to renal plasma flow in most species except for rabbit and cat. Reported volumes of distribution () varied appreciably (0.32 to 10.1 L/kg) among species. Using the physiological and anatomical variables for each species, a minimal physiologically based pharmacokinetic (mPBPK) model consisting of blood and two tissue compartments (Tissues 1 and 2) was used for modeling metformin PK in the nine species. Permeability-limited distribution (low and ) and a single tissue-to-plasma partition coefficient () value for Tissues 1 and 2 were applied in the joint mPBPK fitting. Nonlinear regression analysis for common tissue distribution parameters along with species-specific values reasonably captured the plasma PK profiles of metformin across most species, except for rat and horse with later time deviations. In separate fittings of the mPBPK model to each species, Tissue 2 was considered as slowly-equilibrating compartment consisting of muscle and skin based on in silico calculations of the mean transit times through tissues. The well-fitted mPBPK model parameters for absorption and disposition PK of metformin for each species were compared with in vitro/in vivo results found in the literature with regard to the physiological details and physicochemical properties of metformin. Bioavailability and absorption rates decreased with the increased among the species. Tissues such as muscle dominate metformin distribution with low permeability and partitioning while actual tissue concentrations found in rats and mice show likely transporter-mediated uptake in liver, kidney, and gastrointestinal tissues. Metformin has diverse pharmacologic actions, and this assessment revealed allometric relationships in its absorption and renal clearance but considerable variability in actual and modeled tissue distribution probably caused by transporter differences. View Full-Text
Keywords: metformin; pharmacokinetics; absorption; disposition; allometric scaling; minimal physiologically based pharmacokinetic modeling metformin; pharmacokinetics; absorption; disposition; allometric scaling; minimal physiologically based pharmacokinetic modeling
►▼ Show Figures 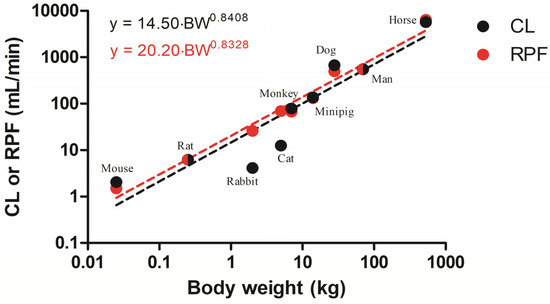 Yoo-Seong Jeong
Yoo-Seong Jeong is a postdoctoral associate in the Department of Pharmaceutical Sciences, University at Buffalo. He received his PhD degree in 2019 in Pharmaceutics from the College of Pharmacy, Seoul National University (SNU) and worked as a postdoctoral fellow in the Research Institute of Pharmaceutical Sciences of SNU. He is interested in improving pharmacokinetic and pharmacodynamic models, particularly with regard to the rate process of ADME (absorption, distribution, metabolism, and excretion) and turnover phenomena of exo- and endogenous substances. In 2018, he won the KJYSP Chair’s Selection Award for his oral presentation in “the workshop for Korea-Japan Young Scientists on Pharmaceutics”.

William J. Jusko
Dr. Jusko is SUNY Distinguished Professor and former Chair of Pharmaceutical Sciences at the University of Buffalo. He received his BS in Pharmacy (1965) and PhD (1970) degrees from Buffalo. He then served as Clinical Pharmacologist at the Boston VA Hospital and Assistant Professor of Pharmacology at Boston University. He returned to Buffalo in 1972 as Director of the Clinical Pharmacokinetics Laboratory and Assistant Professor. He received the Doctor Honoris Causae from Jagiellonian University in Poland (1987) and from the University of Paris Descartes (2015) and has many other awards, including the 2018 Oscar B Hunter Career Award from ASCPT and the 2020 Distinguished Pharmaceutical Scientist Award from AAPS. He serves on the Editorial Boards of seven journals and is the former Editor-in-Chief of JPKPD. His research covers clinical, basic, and theoretical PK/PD of diverse drugs, particularly immunosuppressants, antidiabetics, anticancer drugs, and antibodies, with over 650 publications.
Zoom | Orient | As Lines | As Sticks | As Cartoon | As Surface | Previous Scene | Next Scene
We use cookies on our website to ensure you get the best experience. Read more about our cookies here.
Accept
We have just recently launched a new version of our website. Help us to further improve by taking part in this short 5 minute survey here. here.
Never show this again