Lung Cancer Management with Silibinin: A Historical and Translational Perspective

The flavonolignan silibinin, the major bioactive component of the silymarin extract of Silybum marianum (milk thistle) seeds, is gaining traction as a novel anti-cancer therapeutic. Here, we review the historical developments that have laid the groundwork for the evaluation of silibinin as a chemopreventive and therapeutic agent in human lung cancer, including translational insights into its mechanism of action to control the aggressive behavior of lung carcinoma subtypes prone to metastasis. First, we summarize the evidence from chemically induced primary lung tumors supporting a role for silibinin in lung cancer prevention. Second, we reassess the preclinical and clinical evidence on the effectiveness of silibinin against drug resistance and brain metastasis traits of lung carcinomas. Third, we revisit the transcription factor STAT3 as a central tumor-cell intrinsic and microenvironmental target of silibinin in primary lung tumors and brain metastasis. Finally, by unraveling the selective vulnerability of silibinin-treated tumor cells to drugs using CRISPR-based chemosensitivity screenings (e.g., the hexosamine biosynthesis pathway inhibitor azaserine), we illustrate how the therapeutic use of silibinin against targetable weaknesses might be capitalized in specific lung cancer subtypes (e.g., KRAS/STK11 co-mutant tumors). Forthcoming studies should take up the challenge of developing silibinin and/or next-generation silibinin derivatives as novel lung cancer-preventive and therapeutic biomolecules. View Full-Text
Keywords: silibinin; silymarin; non-small cell lung cancer; EMT; metastasis; STAT3 silibinin; silymarin; non-small cell lung cancer; EMT; metastasis; STAT3
►▼ Show Figures 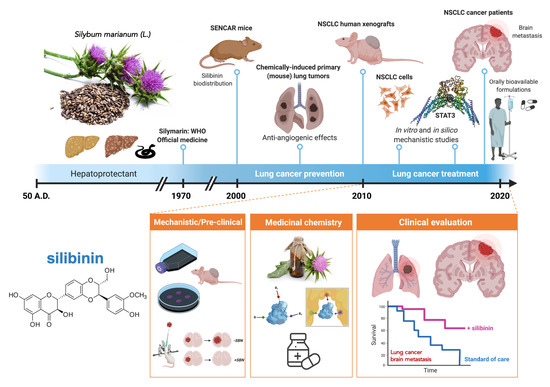 Javier A. Menendez
Born in Asturias (Spain) in 1972, Javier A. Menendez received his bachelor of biological sciences at the University of Oviedo in 1997. He received a master's degree and doctorate in biochemistry and molecular biology at the Complutense University (Madrid, Spain) in 2001. Javier then joined the cancer research laboratory of Ruth Lupu to develop his postdoctoral work first at the Ernest Orlando Lawrence Berkeley National Laboratory (LBNL; Berkeley University, California, USA) and later at the Evanston Research Institute associated with the Northwestern University in Chicago (Illinois, USA). From 2001 to 2005, he was a scientist at the Evanston Northwestern Healthcare Research Institute (ENHRI), an assistant professor at the Department of Hematology/Oncology of the Northwestern University Feinberg School of Medicine, and a full member of the Robert H. Lurie Comprehensive Cancer Center of Northwestern University (Chicago, Illinois, USA). In 2006 he became a tenured researcher at the Catalan Institute of Oncology (ICO) in Girona, Spain, where he continues his research as coordinator of the Metabolism & Cancer Group within the Program Against Cancer Therapeutic Resistance (ProCURE) that the ICO develops at the Girona Biomedical Research Institute (IDIBGI). His research focus is on how metabolism influences human malignancies and the development of new preventive and therapeutic anti-cancer strategies based on the aberrant metabolic phenotype of tumor cells.
Zoom | Orient | As Lines | As Sticks | As Cartoon | As Surface | Previous Scene | Next Scene
We use cookies on our website to ensure you get the best experience. Read more about our cookies here.
Accept
We have just recently launched a new version of our website. Help us to further improve by taking part in this short 5 minute survey here. here.
Never show this again