Lung Cancer Management with Silibinin: A Historical and Translational Perspective

Designer Benzodiazepines: A Review of Toxicology and Public Health Risks

The rising use of designer benzodiazepines (DBZD) is a cat-and-mouse game between organized crime and law enforcement. Non-prohibited benzodiazepines are introduced onto the global drug market and scheduled as rapidly as possible by international authorities. In response, DBZD are continuously modified to avoid legal sanctions and drug seizures and generally to increase the abuse potential of the DBZD. This results in an unpredictable fluctuation between the appearance and disappearance of DBZD in the illicit market. Thirty-one DBZD were considered for review after consulting the international early warning database, but only 3-hydroxyphenazepam, adinazolam, clonazolam, etizolam, deschloroetizolam, diclazepam, flualprazolam, flubromazepam, flubromazolam, meclonazepam, phenazepam and pyrazolam had sufficient data to contribute to this scoping review. A total of 49 reports describing 1 drug offense, 2 self-administration studies, 3 outpatient department admissions, 44 emergency department (ED) admissions, 63 driving under the influence of drugs (DUID) and 141 deaths reported between 2008 and 2021 are included in this study. Etizolam, flualprazolam flubromazolam and phenazepam were implicated in the majority of adverse-events, drug offenses and deaths. However, due to a general lack of knowledge of DBZD pharmacokinetics and toxicity, and due to a lack of validated analytical methods, total cases are much likely higher. Between 2019 and April 2020, DBZD were identified in 48% and 83% of postmortem and DUID cases reported to the UNODC, respectively, with flualprazolam, flubromazolam and etizolam as the most frequently detected substances. DBZD toxicology, public health risks and adverse events are reported. View Full-Text
Keywords: benzodiazepine; designer; NPS; intoxication; poisoning; impairment; death benzodiazepine; designer; NPS; intoxication; poisoning; impairment; death
►▼ Show Figures 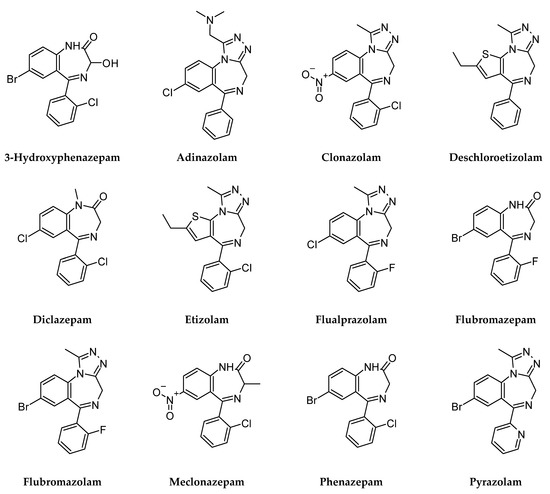