Functional Characterization of the Oxantel-Sensitive Acetylcholine Receptor from Trichuris muris

The human whipworm, Trichuris trichiura, is estimated to infect 289.6 million people globally. Control of human trichuriasis is a particular challenge, as most anthelmintics have a limited single-dose efficacy, with the striking exception of the narrow-spectrum anthelmintic, oxantel. We recently identified a novel ACR-16-like subunit from the pig whipworm, T. suis which gave rise to a functional acetylcholine receptor (nAChR) preferentially activated by oxantel. However, there is no ion channel described in the mouse model parasite T. muris so far. Here, we have identified the ACR-16-like and ACR-19 subunits from T. muris, and performed the functional characterization of the receptors in Xenopus laevis oocytes using two-electrode voltage-clamp electrophysiology. We found that the ACR-16-like subunit from T. muris formed a homomeric receptor gated by acetylcholine whereas the ACR-19 failed to create a functional channel. The subsequent pharmacological analysis of the Tmu-ACR-16-like receptor revealed that acetylcholine and oxantel were equally potent. The Tmu-ACR-16-like was more responsive to the toxic agonist epibatidine, but insensitive to pyrantel, in contrast to the Tsu-ACR-16-like receptor. These findings confirm that the ACR-16-like nAChR from Trichuris spp. is a preferential drug target for oxantel, and highlights the pharmacological difference between Trichuris species. View Full-Text
Keywords: Trichuris; antiparasitic drugs; oxantel; nAChR; helminths; electrophysiology; Xenopus oocytes Trichuris; antiparasitic drugs; oxantel; nAChR; helminths; electrophysiology; Xenopus oocytes
►▼ Show Figures 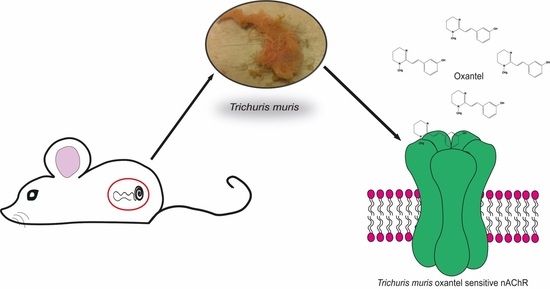