Inflammation is a cancer risk factor [1]. Recent studies have demonstrated that inflammation involves formation of a functional inflammasome that supports the release of inflammatory cytokines [2]. One of these is the Nod-like receptor protein 3 (NLRP3) inflammasome, which facilitates inflammation through the release of pro-inflammatory cytokines, IL-1β or IL-18 [3]. It is proposed that the NLRP3 inflammasome contributes to chronic inflammation, malignant transformation and carcinogenesis in patients and animal models [4,5,6,7,8,9,10]. Therefore, targeting the NLRP3 inflammasome could be an approach to overcome pro-tumorigenic inflammation and provide an option for the development of novel therapeutics for cancer treatment [11].
Dysfunction of mitochondria in tumor cells could be a source of chronic inflammation and inflammasome activation [12]. Supporting this notion, generation of reactive oxygen species by the mitochondria was shown to trigger NLRP3 inflammasome formation in sepsis models and inflammatory diseases associated with mitochondrial damaged [13,14]. These data suggest that therapeutics targeting mitochondrial activity could interfere with this organelle contribution to chronic inflammation. In line with this, antibiotics targeting mitochondrial activity present an attractive tool to regulate inflammasomes. This is based on the similarity between bacteria and mitochondria, where antibiotics could target this eukaryotic organelle and modulate NLRP3 activity [15]. There are some antibiotics that affect inflammasome activity. For example, nigericin, a polyether antibiotic that targets ion transport and ATPase activity in mitochondria, and activates NLRP3 [16]. Additionally, other antibiotics such as polymyxin B, gramicidin, tyrothricin, and neomycin have been demonstrated to activate the inflammasome [17].
Antibiotics have been assessed previously in cancer therapy because of their anti-proliferative, pro-apoptotic, and anti-epithelial-mesenchymal-transition (EMT) potential [18]. Recent studies identified that antibiotic use in cancer therapy can also change the microbiome, reduce the body’s immune defense and promote inflammation [19]. Our previous study demonstrated that nigericin induced NLRP3 inflammasome-mediated pyroptosis [10]. However, the cell death varied depending on NLRP3 activation level and cytokine release. While nigericin induced cell death in tumor cells producing low levels of IL-1β and IL-18, increased proliferation was found in cancer cells producing, high levels of IL-1β and IL-18 [10]. Our findings prompt further investigation of the impact of antibiotic modulation of NLRP3 activity to determine the long-term effects of this.
Doxycycline is a broad-spectrum tetracycline-class antibiotic used to treat cancer-associated infections [20,21,22,23,24]. Doxycycline interferes with bacterial translation by targeting the 30S ribosome of bacteria and inhibiting protein production. The result is either bacteriostatic or bactericidal [20]. Doxycycline was shown to have a therapeutic effect against leptospirosis-induced NLRP3 inflammasome priming via upregulation of the Na/K-ATPase Pump β1 subunit [25]. However, the effect of doxycycline on NLRP3 in cancer cells remains unknown. Therefore, in this study we selected a prostate cancer cell line, PC3, and lung cancer-derived cell line, A549, to investigate the impact of doxycycline on NLRP3 activation. Selection of these cell lines was based on our previous data demonstrating opposite effect on inflammasome activation [10]. PC3 and A549 cells were treated with doxycycline to investigate the role of doxycycline on NLRP3 activity and cell proliferation based on IL-1β release.

2.3. The Effect of Doxycycline on Cytokine Secretion

Doxycycline is one of the tools used for cancer management. It is used to reduce the risk of cancer-associated infections [23,24,28,29]. Additionally, doxycycline is employed for differential diagnosis between tumors and infections with similar symptoms. For instance, prostatic inflammation causes increased serum PSA levels similar to that in prostate cancer [30,31,32,33]. In this example, the reduction in PSA levels to normal after doxycycline treatment indicates prostatitis, not prostate cancer [34]. Additionally, during the last two decades, many studies have highlighted the cell death-inducing effect of doxycycline in a range of tumor cells, including breast prostate, pancreas, lung, and colorectal cancers and leukemia [35,36,37,38,39]. A recent study linked the anti-cancer activity of doxycycline to its effect of inhibiting mitochondrial protein synthesis and the inner mitochondrial membrane potential (ΔΨm) [40]. Decreased ΔΨm was shown to lower apoptotic threshold [39] and induce cell death through pyroptosis [41].
Pyroptosis is a programmed inflammatory cell death induced by inflammatory caspases [42]. A mature inflammatory caspase, such as pro-Caspase-1, is released by activated NLRP3 and subsequently cleaves pro-inflammatory cytokines, IL-1β and IL-18 [9,43]. Today it is evident, that many antibiotics commonly used for treatment of infectious diseases, can induce or reduce NLRP3 activity by targeting mitochondrial processes [15]. In addition, a recent study reported that the mechanism of doxycycline efficacy against Porphyromonas gingivalis infection could be explained by its inhibitory effect on NLRP3 and IL-1β production [40].
IL-1β released from tumors is strongly implicated in tumor progression [44,45]. While present at a low level, IL-1β can induce effective anti-tumor immunity and suppress tumor formation [44,46,47,48]. However, at a high-level IL-1β released by tumor cells promotes tumor progression and metastasis [44,46,47,48]. The effect of long-term use of antibiotics on IL-1β release by tumor cells is largely unknown.
Previously, we demonstrated that tumor cells release various amounts of IL-1β based on their ability to activate NLRP3 [10]. According to our findings, PC3, a prostate cancer cell line, released the highest amount of IL-1β, while A549, a lung adenocarcinoma cell line, secreted low level of IL-1β [10]. Therefore, in this study, we selected these cell lines to investigate the effect of doxycycline on NLRP3 inflammasome activation and cell viability. Our results suggest that doxycycline has an inhibiting effect on LPS priming of the inflammasome, and that it can attenuate the production of pro-CASP1 and NLRP3 RNA and NLRP3 protein assembly irrespective of the level of IL-1β production and secretion in these tumor cells.
Nigericin is an antibiotic that acts as a K+ ionophore [49]. Nigericin triggered release of IL-1β has been demonstrated to be NLRP3-dependent [16]. Our previous study has shown that while nigericin induced tumor cell death, inhibitors of NLRP3, including VX765 and glibenclamide [50], promote tumor cell proliferation [10]. In this study, doxycycline-treated tumor cells tended to react similarly to those treated with nigericin, including exhibiting decreased cell proliferation compared to glibenclamide-treated cells. These changes in tumor cell proliferation could be linked to an increased cell death via apoptosis and pyroptosis [51]. In NLRP3 mediated pyroptotic cell death, both Annexin V and cell impermeant dyes can enter the cell from the opened membrane pores and localize in the inner membrane [51]. Nigericin-only and LPS-nigericin caused a lytic cell death, possibly pyroptosis, which is positive for both Annexin V and PI staining [10]. In contrast to the effect of Nigericin, we identified that doxycycline-only and LPS-doxycycline treatment induced cell death was positive for Annexin V but negative for PI uptake in cancer cells. These findings suggest that, although doxycycline reduces the ΔΨm of tumor cells [39], it decreases cell proliferation and induces apoptosis rather than pyroptosis. A study by Alexander-Savino and colleagues demonstrated that doxycycline induces cell death through the activation of caspase-8, suggesting doxycycline may induce apoptosis via a mitochondrial-independent pathway [52]. Additionally, apart from LPS-only and LPS-nigericin, doxycycline and LPS-doxycycline decreased the level of anti-apoptotic cytokines, such as EGF, FGF2, TGFA, and GM-GSF [53,54,55,56]. These results further support the ability of Doxycycline to inhibit LPS priming of NLRP3 activation, and indicate the inhibitory effect of Doxycycline on LPS-induced anti-apoptotic cytokine secretion in cancer. Additionally, studies showed that tumor cells are more affected by doxycycline than fibroblasts because of the faster depletion of the oxidative phosphorylation enzymes that maintain ΔΨm in tumor cells than non-tumor cells result [39]. Similarly, our findings suggest that doxycycline-only and LPS-doxycycline treatment did not affect non-tumor epithelial cells, making doxycycline a well-tolerated drug for cancer therapy.

The level of IL-1β in the cell-free supernatants was measured using a commercially available ELISA kit, according to manufacturer’s instructions (VECTOR-BEST, Novosibirsk, Russia), and a TECAN Infinite 200 Pro fluorimeter (Grödig, Austria). Each ELISA was completed in technical duplicates.

Cell viability was analysed using APC Annexin V Apoptosis Detection Kit with Propidium Iodide according to the manufacturer’s protocol (Sony Biotechnology, San Jose, CA, USA). Cells stained with Annexin V and PI were detected using a BD FACSAria III Flow Cytometer (BD Biosciences, San Diego, CA, USA) and the data processed with the FlowJo software package (FlowJo LLC, Ashland, OR, USA). Cells stained for Annexin-V only were considered as apoptotic. In contrast, those stained for both Annexin-V and PI were considered to be in late apoptosis phase or pyroptosis [59]. Cells that were negative for Annexin-V/PI were considered as alive. Experiments were performed three times per condition.

The Bio-Plex Pro™ Human Chemokine Panel, 40-Plex, was used to analyze cell-free supernatants according to the manufacturer’s instructions. Fifty microliters of cell-free medium was collected from 24 h to 96 h of incubation and used to determine cytokine concentration. Data were analyzed using Luminex 200 analyzer with MasterPlex CT control software and MasterPlex QT analysis software (MiraiBio division of Hitachi Software San Francisco, CA, USA). Results are presented as a heatmap using the web-based program, Heatmapper (http://www.heatmapper.ca/ (accessed on 4 May 2021)) as described by Babicki and colleagues [60].

In conclusion, we, for the first time, analyzed the effect of the antibiotic doxycycline on the regulation of NLRP3 activation in cancer cells. We found that doxycycline inhibits LPS priming of NLRP3 and leads to early apoptosis, independent of the NLRP3 activating capacity of cancer cells. In vivo studies are required to validate the potential therapeutic benefit of using doxycycline to reduce inflammation within the tumor. We believe, that by reducing inflammation, it will have an additional beneficial effect on cancer therapy. Our findings highlight the potential of antibiotics as regulators of the NLRP3 inflammasome as a possible approach to avert cancer inflammation.

Data is contained within the article and supplementary material.

This article consists of the findings of Mohammad Alsaadi’s master thesis. 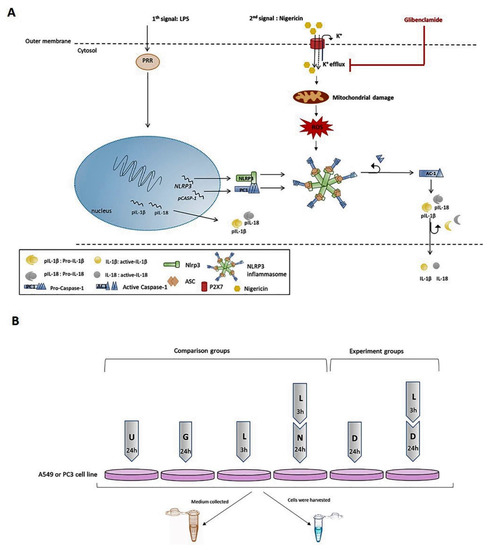 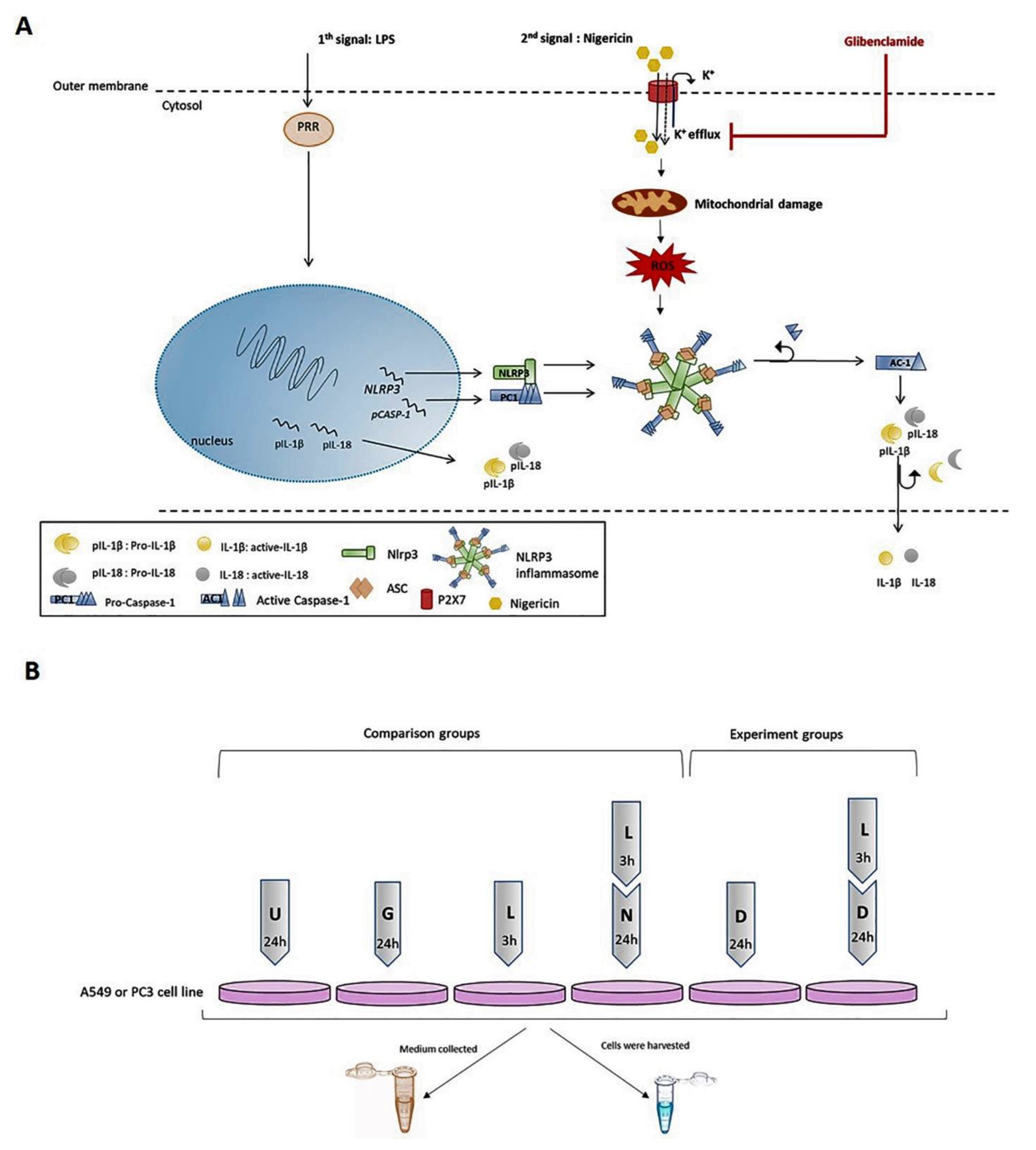 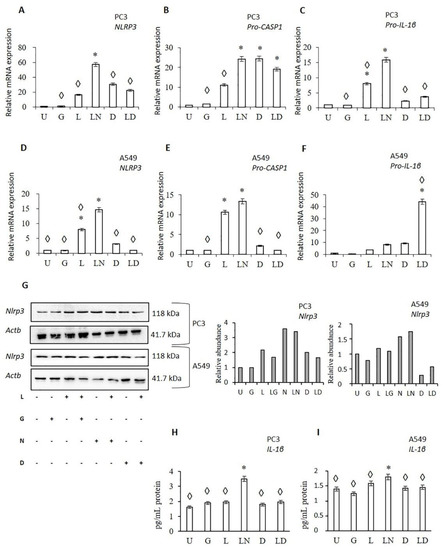 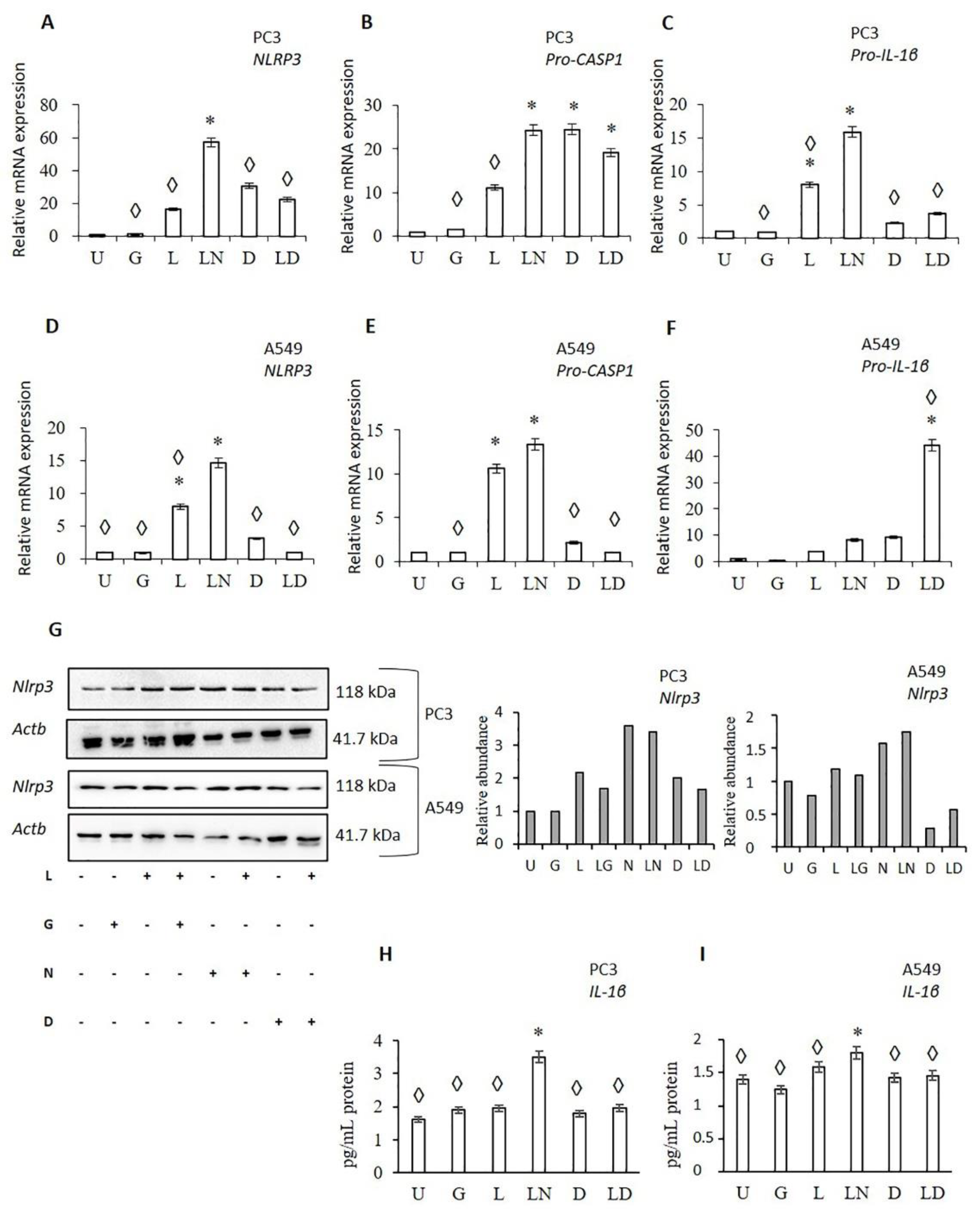 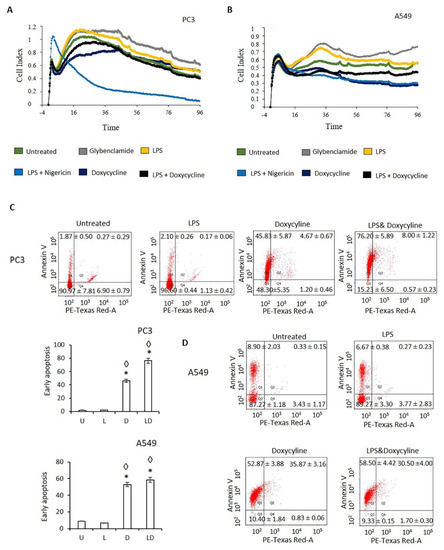 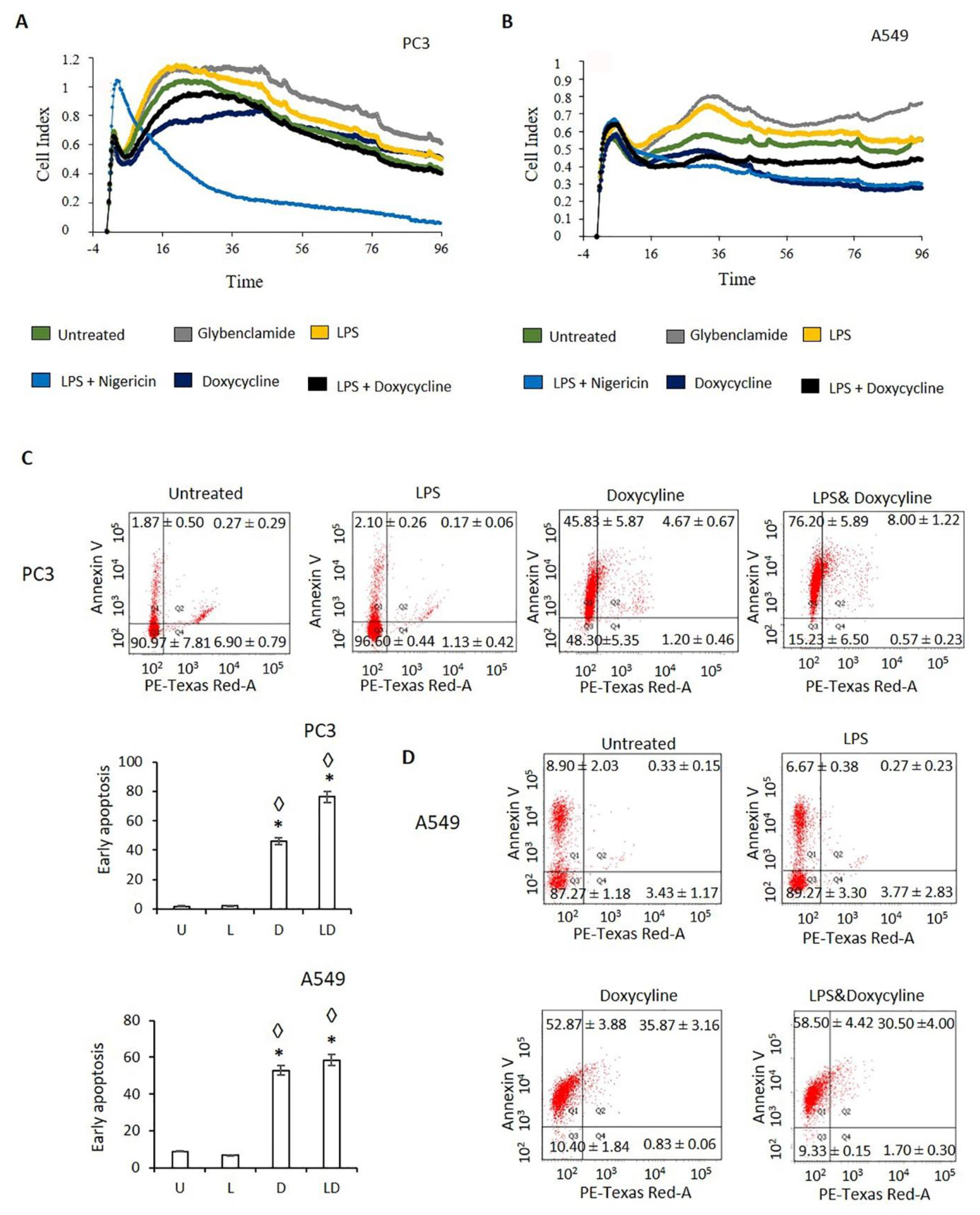 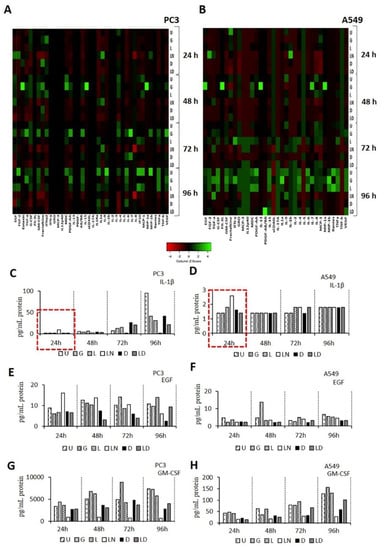 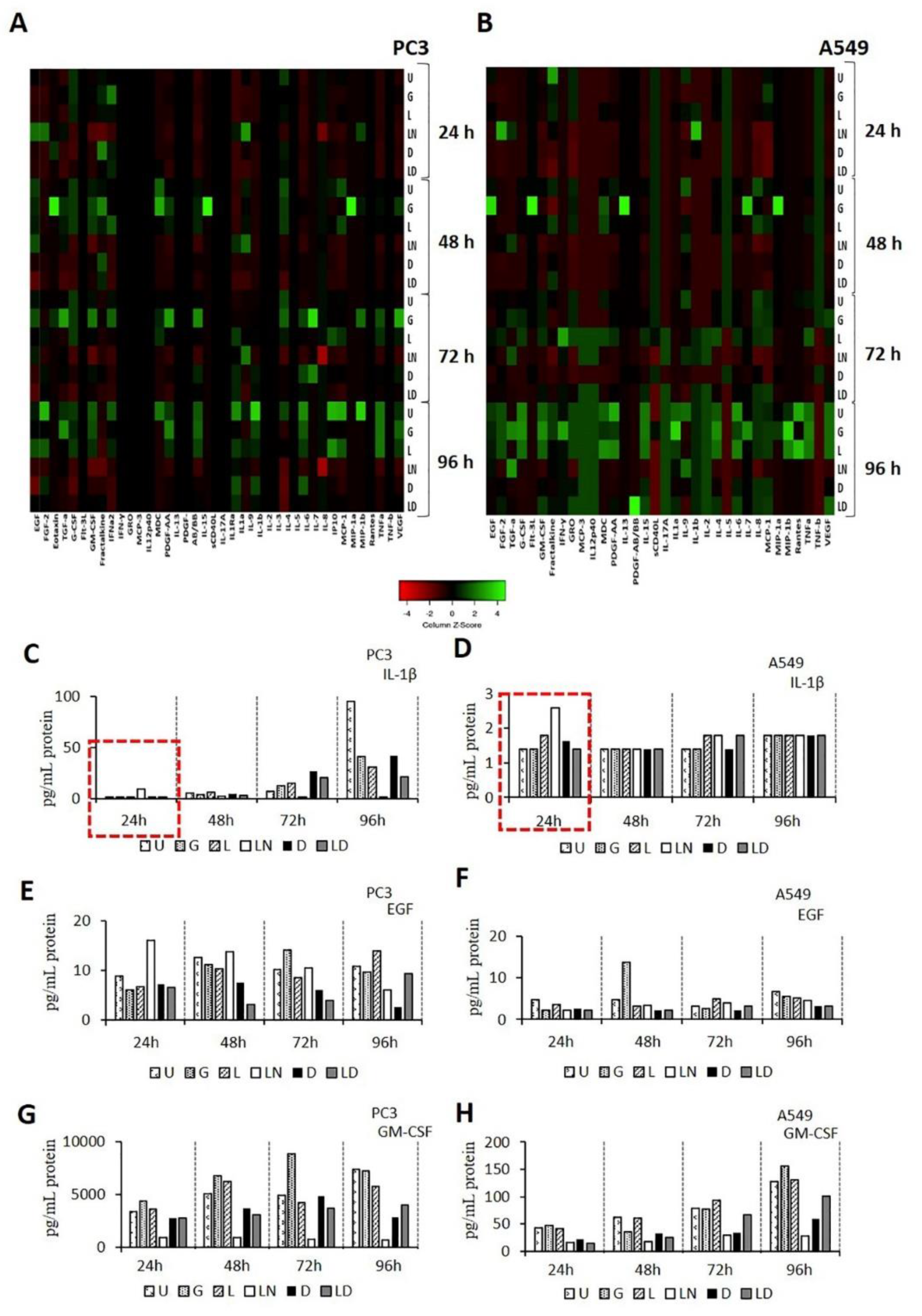