Background and objectives: Fatigue during physical activity occurs because of decreased neuromuscular function. The aim of this study was to evaluate the effect of three different strategies based on motor task performance on neuromuscular fatigue in healthy men and men with multiple sclerosis (MS). Materials and Methods: We studied age-matched (18–43 years of age) healthy men (n = 15) and men with MS (n = 9). The inclusion criteria for MS subjects were a Kurtzke Expanded Disability Status Score <4 and a Fatigue Severity Scale Score >5. Both groups performed one of three exercise trials (with at least a 1-week interval between them) of 100 intermittent isometric knee extensions with flexion of 60°. The three different experimental conditions (ECs) were intermittent isometric contraction tasks with constant, predictable, and unpredictable torque target sequences. The variation of maximal voluntary contraction contractions (MVCs) within the strategies was 25%, 50%, and 75%, with a set average of 50%. All of them had a 5 s contraction and a 20 s rest period. The variables were measured: before exercise, after 100 repetitions (100-Reps), and 1 h after exercise. Results: In all EC tasks, the central activation ratio values of healthy and MS subjects were significantly different; however, no significant differences were observed among the EC tasks. No significant differences were seen in electrically induced torque, MVC torque, muscle temperature, subjective sensation of effort, coefficient of variation, or constant and absolute error after 100-Reps and 1 h after exercise between the two groups and in all EC tasks. Conclusions: Men with MS experienced higher central motor fatigue than did healthy men, but this had no effect on the variability, accuracy, or force sensation of the movements performed. View Full-Text
Keywords: multiple sclerosis; motor task specificity; motor accuracy; subjective force sensations multiple sclerosis; motor task specificity; motor accuracy; subjective force sensations
►▼ Show Figures 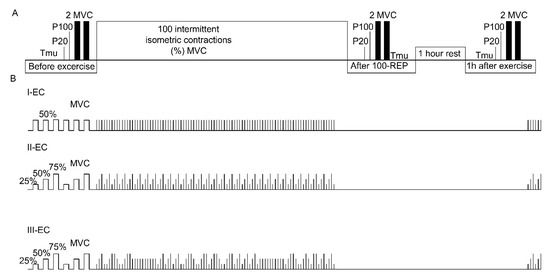