Midbody: From the Regulator of Cytokinesis to Postmitotic Signaling Organelle

Faithful cell division is crucial for successful proliferation, differentiation, and development of cells, tissue homeostasis, and preservation of genomic integrity. Cytokinesis is a terminal stage of cell division, leaving two genetically identical daughter cells connected by an intercellular bridge (ICB) containing the midbody (MB), a large protein-rich organelle, in the middle. Cell division may result in asymmetric or symmetric abscission of the ICB. In the first case, the ICB is severed on the one side of the MB, and the MB is inherited by the opposite daughter cell. In the second case, the MB is cut from both sides, expelled into the extracellular space, and later it can be engulfed by surrounding cells. Cells with lower autophagic activity, such as stem cells and cancer stem cells, are inclined to accumulate MBs. Inherited MBs affect cell polarity, modulate intra- and intercellular communication, enhance pluripotency of stem cells, and increase tumorigenic potential of cancer cells. In this review, we briefly summarize the latest knowledge on MB formation, inheritance, degradation, and function, and in addition, present and discuss our recent findings on the electrical and chemical communication of cells connected through the MB-containing ICB. View Full-Text
Keywords: cytokinesis; intercellular bridge; midbody; conductance; permeability; tumorigenicity cytokinesis; intercellular bridge; midbody; conductance; permeability; tumorigenicity
►▼ Show Figures 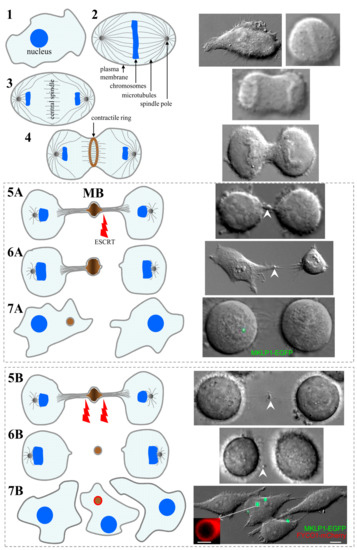