Background: Detection of small proportion of serious bacterial infections (SBI) with a potentially life threating course in a large group of children with fever admitted to emergency department (ED) is still complicated. Measurement of immature granulocytes (IG) percentage may be used as a marker of bacterial infections. The aim of the study was to evaluate whether the IG percentage is a useful additional predictive marker of SBI. Methods: This study included 258 children with febrile infections that were admitted to the ED. Clinical follow-up, microbiological and radiological tests were used as reference standards for the definition of SBI. Study population was categorized into two groups: (1) infected patients with no suspicion of SBI (n = 75); (2) patients with suspicion of SBI (n = 183). IG percentage, white blood cell count (WBC), and C-reactive protein (CRP) levels were analyzed from the first routine blood samples at hospital admission. Results: A statistically significant difference in IG percentage levels was observed in children with SBI and those without—the mean IG percentage was 1.2% for the SBI group, 0.3% for those without SBI. The cutoff level of IG percentage to predict SBI was 0.45 (84% specificity, 66% sensitivity, 90% positive predictive value). We combine variables and evaluate their additive values. The sensitivity of WBC to detected SBI improved from 74% to 85% when IG percentage was added to the prediction models. When CRP, WBC, and IG percentage were combined, the sensitivity to predict SBI increased to 93%, the specificity to 86% (95% CI 77%–93%). Receiver operator characteristic analysis to predict SBI showed an area under the curve (AUC) of 0.80 for IG percentage. Conclusion: Addition of IG percentage to traditionally used markers of SBI as WBC and CRP may help to identify children with serious bacterial infections. Furthermore, IG percentage can be rapidly obtained from the traditional full blood count without any extra sampling and costs. View Full-Text
Keywords: bacterial infections; sensitivity; specificity; immature granulocytes; Latvia; child; sepsis bacterial infections; sensitivity; specificity; immature granulocytes; Latvia; child; sepsis
►▼ Show Figures 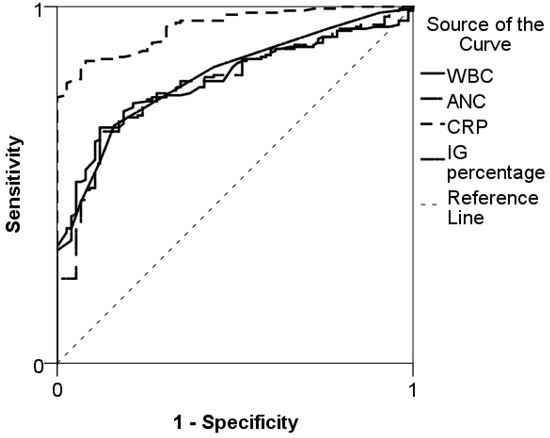