Association between the Vicious Cycle of Diabetes-Associated Complications and Glycemic Control among the Elderly: A Systematic Review

Background and objectives: Many pediatric patients have been treated with antibiotics during their hospitalization. There is a need to improve antibiotic prescribing for pediatric patients because many of these prescriptions are inappropriate. Antibiotic consumption analysis was conducted at the Children’s Clinical University Hospital to identify targets for quality improvement. Materials and Methods: A one day cross-sectional point prevalence survey (PPS) was conducted in May and November 2011–2013 using a previously validated and standardized method. The survey included all inpatient pediatric and neonatal beds and identified all children receiving an antibiotic treatment on the day of survey. Total consumption of systemic antibiotics belonging to the ATC J01 class (except amphenicols (J01B) and a combination of antibacterials (J01R)) was also analyzed by using a defined daily dose (DDD) approach and antibiotic drug utilization (90%DU) for the period 2006–2015. Results were compared with results in 2017 using the DDD and 90%DU methodology. Results: The most commonly used antibiotic group in all PPS, except in May and November 2011, was other β-lactam antibiotics (J01D): 42 (40%) prescriptions in May 2013 and 66 (42%) and November 2011. In 2006–2015 and also in 2017, the most commonly used antibiotic groups were penicillins (J01C) and other β-lactam antibiotics (J01D)—76% (90%DU) of the total antibiotic consumption registered in 2006, 73% in 2015 and 70% in 2017. Starting in 2008, amoxicillin was the most commonly used antibiotic at the hospital. The usage of ceftriaxone increased from 3% in 2006 to 13% in 2015, but decreased in 2017 (7%). Conclusions: Study results from 2006–2015 showed that there was a need to establish a stronger antibiotic prescribing policy in the hospital reducing the use of broad-spectrum antibiotics (especially 3rd generation cephalosporins) and increasing the use of narrower spectrum antibiotics. It was partly achieved in 2017 with some reduction in ceftriaxone use. View Full-Text
Keywords: defined daily dose; hospitalized children; parenteral antibiotics; point prevalence survey; third-generation cephalosporins defined daily dose; hospitalized children; parenteral antibiotics; point prevalence survey; third-generation cephalosporins
►▼ Show Figures 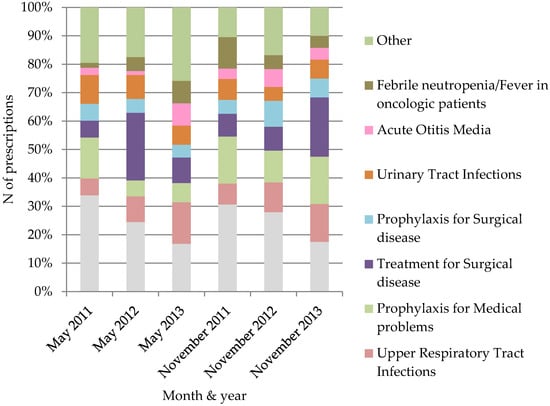