Effect of Probiotics on the Glucose Levels of Pregnant Women: A Meta-Analysis of Randomized Controlled Trials

Background and Objectives: Pediatric renal replacement therapy (RRT) in Lithuania resumed in 1994 after a 12-year pause in renal transplantation. Management of end stage renal disease (ESRD) has changed, and outcomes have improved over decades. Our aim was to evaluate the dynamics of RRT in Lithuania in the period 1994–2015, describe its distinctive features, and compare our results with other countries. Materials and Methods: Data between 1994 and 2015 were collected from patients under the age of 18 years with ESRD receiving RRT. The data included: Hemodialysis (HD), peritoneal dialysis (PD), transplantation incidence and prevalence, transplant waiting time, dialysis modalities before transplantation, causes of ESRD and gender distribution in transplanted patients, and patient and graft survival. Results: RRT incidence and prevalence maintained an increase up until 2009. Sixty-four transplantations were performed. Juvenile nephronophthisis (25.9%) was the primary cause of ESRD in transplanted children. The transplant waiting time median was 8.0 months. The male to female ratio post-transplantation was 1.02. Patient survival after transplantation at 10 years was 90.0%, while graft survival for living (related) was 77.0% and 51.1% for deceased. Twelve patients died while on RRT. Conclusions: RRT numbers are increasing in Lithuania. HD is the primary treatment of choice before transplantation, with continued low numbers of preemptive transplantation. Patient survival post-transplantation is favorable, though graft survival is less satisfactory. View Full-Text
Keywords: epidemiology; end stage renal disease; renal replacement therapy; children; Lithuania epidemiology; end stage renal disease; renal replacement therapy; children; Lithuania
►▼ Show Figures 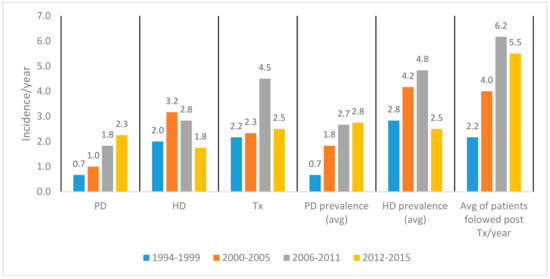