Background and objectives: Energy drinks are popular non-alcoholic beverages. They are consumed in large amounts, mainly by active, young people. Although they are easily accessible and marketed as safe, numerous cases of adverse effects have been published, including cardiac arrest, arrythmias, acute hepatitis, and renal failure. The aim of the current study is the assessment of energy drink influence on the histological structure of adrenal cortex in rats. Material and Methods: 15 male young Wistar rats were equally divided into three groups: control (C), experimental (E) and reversibility control (RC). C group received water and standard rodent food ad libitum while both E and RC groups had additionally unlimited access to energy drinks. C and E groups were decapitated after 8 weeks and RC was given another 8 weeks without energy drinks. Adrenal glands were embedded in paraffin blocks and 5 μm slides were prepared and stained according to standard H&E and Masson’s trichrome protocols. Additionally, immunohistochemical stainings against Ki-67, p53, CTGF and caspase-3 were prepared. Results: Decreased vacuolization and numerous pyknotic nuclei were noted in E and RC groups. Overexpression of caspase-3 was noted both subcapsular in zona glomerulosa and along sinusoids in zona fasciculata. Increased collagen deposition in zona glomerulosa and zona fasciculata of E and RC was observed. Insular and irregular overexpression of CTGF was noted. The overall picture of CTGF expression matched the Masson’s trichrome. No significant difference was observed in Ki-67 expression. Conclusions: The results of the current study suggest that the stimulation is so intense that it causes significant damage to adrenal cortical cells, resulting in their apoptosis. It seems, however, that the observed effects are at least partially reversible. View Full-Text
Keywords: energy drinks; Wistar; rats; adrenal glands; caffeine; taurine energy drinks; Wistar; rats; adrenal glands; caffeine; taurine
►▼ Show Figures 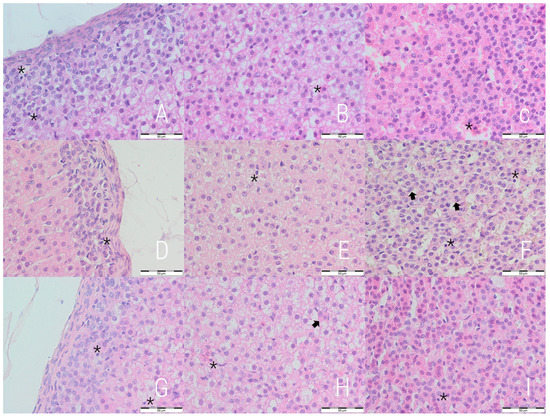