The Beneficial Effects of Traditional Chinese Exercises for Adults with Low Back Pain: A Meta-Analysis of Randomized Controlled Trials

Background: Autism spectrum disorder (ASD) is a complex developmental condition typically characterized by deficits in social and communicative behaviors as well as repetitive patterns of behaviors. Despite its prevalence (affecting 0.1% to 1.8% of the global population), the pathogenesis of ASD remains incompletely understood. Patients with ASD are reported to have more frequent gastrointestinal (GI) complaints. There is some anecdotal evidence that probiotics are able to alleviate GI symptoms as well as improve behavioral issues in children with ASD. However, systematic reviews of the effect of prebiotics/probiotics on ASD and its associated symptoms are lacking. Methods: Using the keywords (prebiotics OR probiotics OR microbiota OR gut) AND (autism OR social OR ASD), a systematic literature search was conducted on PubMed, EMBASE, Medline, Clinicaltrials.gov and Google Scholar databases. The inclusion criteria were original clinical trials, published in English between the period 1st January 1988 and 1st February 2019. Results: A total of eight clinical trials were systematically reviewed. Two clinical trials examined the use of prebiotic and/or diet exclusion while six involved the use of probiotic supplementation in children with ASD. Most of these were prospective, open-label studies. Prebiotics only improved certain GI symptoms; however, when combined with an exclusion diet (gluten and casein free) showed a significant reduction in anti-sociability scores. As for probiotics, there is limited evidence to support the role of probiotics in alleviating the GI or behavioral symptoms in children with ASD. The two available double-blind, randomized, placebo-controlled trials found no significant difference in GI symptoms and behavior. Conclusion: Despite promising preclinical findings, prebiotics and probiotics have demonstrated an overall limited efficacy in the management of GI or behavioral symptoms in children with ASD. In addition, there was no standardized probiotics regimen, with multiple different strains and concentrations of probiotics, and variable duration of treatments.
Keywords: probiotics; Lactobacillus; Bifidobacterium; autism; ASD; gut microbiota probiotics; Lactobacillus; Bifidobacterium; autism; ASD; gut microbiota

Autism spectrum disorder (ASD) is a complex developmental condition typically characterized by deficits in social and communicative behaviors as well as repetitive patterns of behaviors [1]. Worldwide, prevalence estimates for ASD range from 0.1% to 1.8% [2]. In the United States, the estimated prevalence of ASD is 16.8 per 1000 (one in 59) children aged eight years old [3]. The etiology behind ASD is not known for certain, but current studies suggest that there is an intricate interplay of several genetic, epigenetic and environmental factors [4,5]. Patients with ASD also develop multiple comorbidities ranging from psychiatric issues such as anxiety [6] to the commonly seen gastrointestinal (GI) disorders [7]. There is an increased incidence of GI complaints in ASD patients [8] and the symptoms are variable, presenting as diarrhea, constipation, abdominal pain or bloating. These GI disorders can be rather refractory to conventional treatment [9] and therefore present a challenge to treat.
Patients with ASD have been reported as having different compositions of gut microbiota compared to neurotypical controls. There have been observations of higher concentrations of pathogenic Clostridium bacteria [10], a decreased Bacteroides/Firmicutes ratio, and increased Lactobacillus and Desulfovibrio species [11,12]. The effect of gut microbiota on the GI system has been well documented, influencing GI motility, intestinal epithelium permeability and mucus production [13]. Specifically, in patients with ASD, the severity of GI symptoms have been linked with derangements in the gut microbiota, such as during administration of antibiotics. It was also noted that the GI and behavioral symptoms reverted once antibiotics were stopped [14]. This opens up further avenues of research for the role of gut microbiota-altering agents such as probiotics as a potential therapeutic option.
As defined by the International Scientific Association for Probiotics and Prebiotics (ISAPP), probiotics are “live microorganisms that, when administered in adequate amounts, confer a health benefit on the host” [15]. Probiotics aim to restore normal balance of human gut microbiota and have been shown to be effective in treating other GI disorders such as traveler’s diarrhea [16] and irritable bowel syndrome [17]. Recent studies have suggested that probiotics are beneficial in treating several psychological symptoms such as depression and anxiety [18,19]. It is theorized that there exists a complex interplay between the brain and the GI tract termed the “gut–brain axis”. Gut microbiota play an important role in modulating this gut–brain axis and dysbiosis can have negative effects on not only the GI tract, but also psychological symptoms [20]. Dietary exclusions and supplements have been investigated in the management of ASD symptoms [21]. In particular, there is some anecdotal evidence that probiotics are able to alleviate GI symptoms as well as improve behavioral issues in children with ASD [22].
Besides probiotics, the impact of prebiotics on the gut microbiota is not to be neglected. As defined by the ISAPP, prebiotics are substrates “selectively utilized by host microorganisms, conferring a health benefit” [15]. Examples are non-digestible carbohydrates. The effect of exclusion diets and prebiotics was recently evaluated in children with ASD, with findings including significant changes in gut microbiota composition and metabolism and amelioration of GI and behavioral symptoms [23].
Despite significant public interest in pre- and probiotics, systematic reviews of the effect of prebiotics/probiotics on ASD and its associated behavioral/GI symptoms are lacking. Therefore, this review aims to examine the clinical role of prebiotics and probiotics in the management of GI and core ASD symptoms.

A systematic literature search was performed in accordance with Preferred Reporting Items for Systematic Reviews and Meta-Analyses (PRISMA) guidelines. Using the keywords (prebiotics OR probiotics OR microbiota OR gut) AND (autism OR social OR ASD), a preliminary search on the PubMed, EMBASE, Medline, Clinicaltrials.gov and Google Scholar databases yielded 1592 papers published in English between 1st January 1988 and 1st September 2018. Attempts to search grey literature were made using the Google search engine. Title/abstract screening were performed independently by the researchers (Q.X. Ng, W.R. Loke and N. Venkatanarayanan) to identify articles of interest. For relevant abstracts, full articles were obtained, reviewed and also checked for references of interest. If necessary, the authors of the articles were contacted to provide additional data.
The inclusion criteria for this review were: (1) published retrospective or prospective study (excluding single case reports), (2) patients with clinical diagnosis of ASD, (3) trial of prebiotic and/or probiotic treatment, and (4) available data on GI/behavioral/psychiatric symptoms. Data such as study design, study population and demographics, and outcome measure were extracted. The primary outcome measure of interest was GI/behavioral/psychiatric symptom outcome with pre-/probiotic treatment.

The abstraction process is summarized in Figure 1.
A total of eight clinical trials were systematically reviewed (Table 1). Two clinical trials examined the use of prebiotic and/or diet exclusion while six involved the use of probiotic supplementation in children with ASD. Most of these were prospective, open-label studies, with the exception of three randomized, double-blind, placebo-controlled trials.

Based on current studies, there is overall limited evidence to support the role of prebiotics or probiotics in alleviating GI or behavioral symptoms in children with ASD. However, the dearth of studies does not mean that there is no effect. Two open-label trials found significant improvement in GI symptoms after probiotic supplementation, and three open-label trials found that probiotics helped to mitigate the behavioral issues characteristic of ASD. However, the two available double-blind, randomized, placebo-controlled trials found no significant difference in GI symptoms and behavior. Despite promising preclinical findings and positive anecdotal reports, the clinical utility of prebiotics and probiotics in the management of GI or behavioral symptoms in children with ASD remains to be validated by future studies. There is a lack of randomized, controlled trials and most studies had a small sample size (N < 50). In addition, there was no standardized probiotics regimen, with multiple different strains and concentrations of probiotics, and variable duration of treatments. Looking ahead, further mechanistic studies enabled by the advent of metabolomics and larger trials involving a standardized intervention regimen are necessary to advance the field.

The authors declare no conflict of interest. The authors alone are responsible for the content and writing of the article. 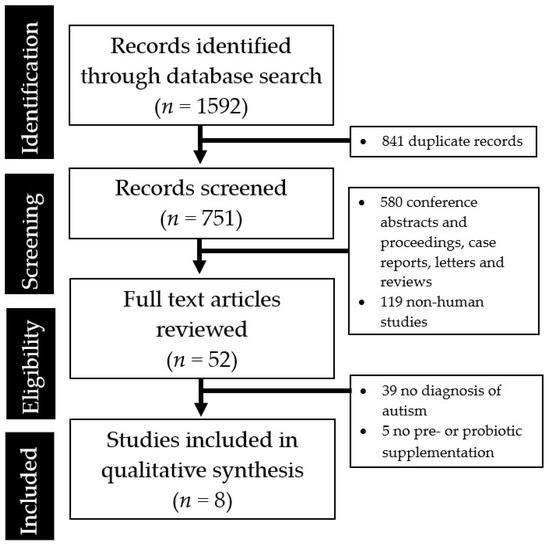 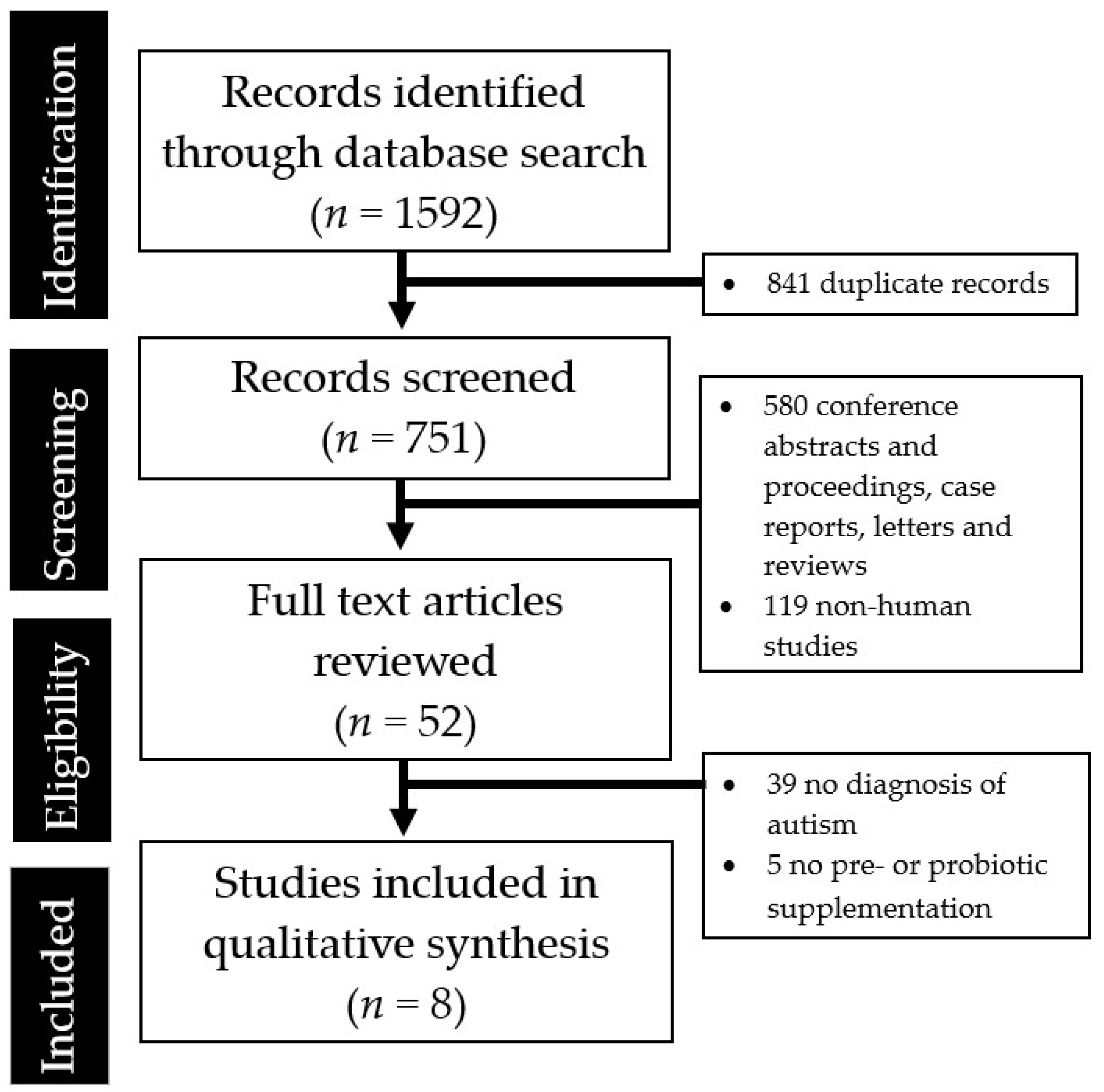