Background and Objectives: The aim of the study was to evaluate trends in smoking among middle-aged men and women based on the data from the Lithuanian High Cardiovascular Risk (LitHiR) primary prevention program between 2009 and 2016. Materials and Methods: A community-based cross-sectional study comprised 92373 Lithuanian adults (41.6% men and 58.4% women). We compared the prevalence of smoking, smoking cessation activity and smoking intensity by gender and age groups. Results: There was a statistically significant upward trend in the number of smoking subjects (average annual percent change (AAPC) 2.99%, p < 0.001). The number of smoking male subjects remained much higher than the number of smoking female subjects during the 2009–2016 period. The study showed a significant increase in the percentage of smoking quitters in the whole group (AAPC 7.22%, p < 0.001) and among men and women separately. There was no significant change in smoking intensity in groups of male and female smokers separately. Conclusions: The analysis showed that the prevalence of smoking in Lithuania is still increasing due to women smoking despite all the governmental tobacco control efforts to reduce it. View Full-Text
Keywords: smoking prevalence; smoking cessation; primary prevention; risk factors; trends smoking prevalence; smoking cessation; primary prevention; risk factors; trends
►▼ Show Figures 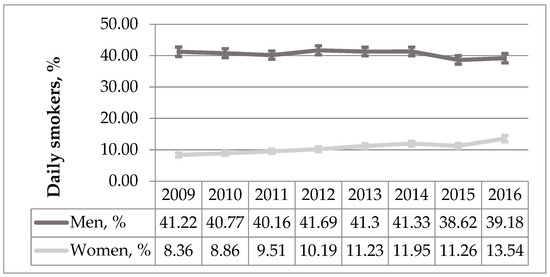