Association between P2X7 Polymorphisms and Susceptibility to Tuberculosis: An Updated Meta-Analysis of Case-Control Studies
Next Article in Special Issue

Background and objectives: To enter the target cell, HIV-1 binds not only CD4 but also a co-receptor β-chemokine receptor 5 (CCR5) or α chemokine receptor 4 (CXCR4). Limited information is available on the impact of co-receptor usage on HIV-1 replication in monocyte-derived macrophages (MDM) and on the homeostasis of this important cellular reservoir. Materials and Methods: Replication (measured by p24 production) of the CCR5-tropic 81A strain increased up to 10 days post-infection and then reached a plateau. Conversely, the replication of the CXCR4-tropic NL4.3 strain (after an initial increase up to day 7) underwent a drastic decrease becoming almost undetectable after 10 days post-infection. The ability of CCR5-tropic and CXCR4-tropic strains to induce cell death in MDM was then evaluated. While for CCR5-tropic 81A the rate of apoptosis in MDM was comparable to uninfected MDM, the infection of CXCR4-tropic NL4.3 in MDM was associated with a rate of 14.3% of apoptotic cells at day 6 reaching a peak of 43.5% at day 10 post-infection. Results: This suggests that the decrease in CXCR4-tropic strain replication in MDM can be due to their ability to induce cell death in MDM. The increase in apoptosis was paralleled with a 2-fold increase in the phosphorylated form of p38 compared to WT. Furthermore, microarray analysis showed modulation of proapoptotic and cancer-related genes induced by CXCR4-tropic strains starting from 24 h after infection, whereas CCR5 viruses modulated the expression of genes not correlated with apoptotic-pathways. Conclusions: In conclusion, CXCR4-tropic strains can induce a remarkable depletion of MDM. Conversely, MDM can represent an important cellular reservoir for CCR5-tropic strains supporting the role of CCR5-usage in HIV-1 pathogenesis and as a pharmacological target to contribute to an HIV-1 cure. View Full-Text
Keywords: α chemokine receptor 4; β-chemokine receptor 5; human immunodeficiency virus; monocyte-derived macrophages α chemokine receptor 4; β-chemokine receptor 5; human immunodeficiency virus; monocyte-derived macrophages
►▼ Show Figures 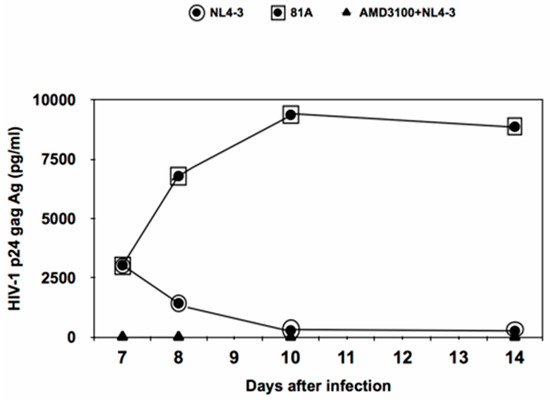