Background and Objectives: Dyslipidaemia and its associated complications have been reported to increase mortality among type 2 diabetes mellitus (T2DM) patients. However, there is a dearth of data on the incidence of dyslipidemia among Ghanaian patients with T2DM. This study evaluated dyslipidemia among newly diagnosed T2DM patients at Dormaa Presbyterian Hospital, Ghana. Materials and Methods: This cross-sectional study recruited a total of 215 participants at the Presbyterian Hospital, Dormaa-Ghana. A well-structured questionnaire was administered to collect demographic data. Predisposing factors of dyslipidemia such as BMI, hypertension, and family history of diabetes were also obtained. Lipid profile was performed on the serum obtained from each respondent. Dyslipidaemia was defined as total cholesterol (TC) >200 mg/dL, triglyceride (TG) >150 mg/dL, low density lipoprotein cholesterol (LDL-c) >100 mg/dL, and high-density lipoprotein cholesterol (HDL-c) <40 in males and <50 mg/dL in females. Combinations of the individual parameters of dyslipidaemia were further evaluated. Results: Of the total (215) participants, 86 (40%) were males and 129 (60%) were females, representing a ratio of 1:1.5. High total cholesterol was more prevalent in females (69.0%) than males (53.5%). Generally, dyslipidaemia was predominant among those aged >40 years, with the exception of increased LDL-c (25.1%), which was higher among the 20–40 years age group. The male participants exhibited significantly (p < 0.001) higher percentages of all combined measures of dyslipidaemia—such as high TG and reduced HDL-c (77.9%), high TG and elevated LDL-c (75.6%) and high LDL and low HDL (65.1%). BMI was significantly associated with HDL levels (p = 0.02), whereas family history of diabetes was associated with TC (p = 0.004) and TG levels (p = 0.019). Conclusion: Combined dyslipidaemia is relatively high among newly diagnosed T2DM patients in Ghana, and in those >40 years. Gender is significantly associated with combined dyslipidaemia in T2DM, and males may be at a higher risk than females. BMI and family history of diabetes are potential risk factors of dyslipidaemia in T2DM.
Keywords: diabetes; combined dyslipidemia; gender; family history; BMI diabetes; combined dyslipidemia; gender; family history; BMI

The International Diabetes Federation IDF [1] indicated that, globally, 415 million people lived with diabetes mellitus (DM) in 2015 and approximately two out of 20 subjects affected by diabetes lived in low and middle income countries [1]. Currently, studies have shown that in Africa, about 14.2 million adults have diabetes, with a prevalence of 3.2% [2]. Furthermore, in Ghana, about 266,200 of the population within the age range of 20–79 years are suffering from DM, representing a prevalence rate of 1.9% [1]. In Sub-Saharan Africa, it is estimated that 30% of patients admitted in cardiovascular intensive care units have diabetes mellitus, and subsequent cardiovascular disease is responsible for mortality in two out of three diabetes patients [3].
Type 2 diabetes mellitus (T2DM) occurs when insulin production is defective or its action on the metabolism of body sugars is defective [4]. Dyslipidaemia and atherogenic dyslipidaemia cause complications and mortality in type 2 diabetes patients, in addition to being strong potential risk factors for predicting cardiovascular diseases [5,6]. Samdani et al. [7] defined dyslipidaemia as the presence of one or more disorders in serum lipids in an individual [7].
Dyslipidaemia is a metabolic disturbance whichstimulates insulin resistance in adipose and muscle tissues [8]. Insulin resistance then results in persistent hyperglycaemia, in which the body becomes susceptible to protein glycation and formation of sorbitol, advanced glycated end products, and free radicals [8]. Thus, in type 2 diabetes, there is the likelihood of alterations in lipids and lipoprotein parameters, which contribute to oxidative stress [9]. The formation of these free radicals and advanced glycated end products, and subsequent oxidative stress causes damage to endothelial tissues [10]. The dysfunction of endothelial tissue can stimulate atherosclerotic events on blood vessels, which can progress to cardiovascular diseases [9].
Dyslipidaemia becomes atherogenic when there is combined elevation of triglycerides (TG) and small compressed low density lipoprotein cholesterol (LDL-c), and decreased high density lipoprotein cholesterol (HDL-c) in the blood [11]. While dyslipidaemia is a devastating complication of Type 2 diabetes, different populations may exhibit erratic changes in their lipid profiles [12] For instance, LDL-cis somewhat elevated among non-Africans and lowered in other racial groups of diabetes mellitus [12].
In urban Ghana, at least 6% of adults are affected by type 2 DM [13]. Even though research elsewhere has shown the prevalence of dyslipidaemia and high predisposition risk of atherosclerotic vascular diseases among type 2 diabetes patients [14,15], very little has been done and reported among Ghanaian diabetes patients, and the degree to which these observations are true in the Ghanaian context is unknown.
There is, therefore, the need for a better insight into dyslipidemia among type 2 DM patients in Ghana, in order to unravel scientific statistics required for understanding the occupancy of this complication. It is against this background that the present study was conducted to evaluate dyslipidaemia among newly diagnosed type 2 diabetes outpatients in Ghana.

This descriptive cross-sectional study was conducted at the Dormaa Presbyterian Hospital of the Dormaa Central Municipality of the Brong-Ahafo Region of Ghana. Dormaa Municipality with its administrative capital at Dormaa-Ahenkro is one of the twenty-seven Districts and Municipalities in the Brong-Ahafo Region of Ghana. The biggest health facility in Dormaa Municipality is the Dormaa Presbyterian Hospital (DPH), which provides services for both acute and chronic disease conditions as well as receive referrals from other neighboring districts, regions and nearest town in La Cote D’ Ivoire.

Purposive sampling was used to recruit only newly diagnosed male and female T2DM patients (target population) at the Dormaa Presbyterian Hospital from the diabetic clinic, after which, simple random sampling was used to obtain a total sample size of 215. Newly diagnosed T2DM patients ≥18 years who were not on any cardiovascular therapy (such as statin or other lipid-lowering therapy) were included in the study. Pregnant women, patients with diagnosed diabetes for more than 1 year, and diabetes patients with renal disorders and other complications were all excluded from the study.

Ethical approval was granted by the Dormaa Central Municipal Health Directorate and the Authorities of the Presbyterian Hospital, DCMHD/EC/013/18, from 12 April 2018. The study was conducted in accordance with the Helsinki Declaration and its later amendments or comparable ethical standards [16]. A written informed consent form was provided to each participant to willingly decide to be part of the study after the aim of the study and the guarantee of anonymity were discussed with them.

A well-structured questionnaire was used to collect demographic data such as age, gender, occupational status, and educational level. Data on predisposing factors such as hypertension, BMI, and medical history of the study participants were also obtained from their medical folders and hospital database.

Data were entered into Microsoft Excel 2013, and the Statistical Package for Social Science (SPSS) version 23.0 and GraphPad prism 7.0 were used to process the data. Data were represented as mean ± standard deviation (SD). The Chi-square test was used to analyze categorized variables. A p-value <0.05 was considered statistically significant for all analyses.

Of the total of 215 participants, 86 (40%) were males and 129 (60%) were females, representing a ratio of 1:1.5. The majority of the respondents (53.9%) were ≥41 years and were married (63.7%). With regards to religious affiliation, Christians recorded the highest percentage (51.2%) followed by Muslims (45.1%), and Traditionalists (3.7%). Most of the respondents (60%) acquired basic education while a few attained higher education (14%). A higher percentage (32.6%) of the participants were self-employed, with a few (21.4%) into farming. Mean HDL-c and BMI were 32. 9 mg/dL and 26.7 kg/m2 respectively Table 1.
Table 2 shows the prevalence of dyslipidaemia stratified by gender and age. The results show that high TC was more prevalent (69.0%) in females than in males (53.5%). Males with elevated triglyceride were 40 (46.5%), 59.3% were identified with increased LDL-c, and 62.8% exhibited lower HDL-c (<40 mg/dL). Elevated TG (>150 mg/dL), high LDL-c (>100 mg/dL), and decreased HDL-c (<50 mg/dL) were recorded as 49.6%, 39.5%, and 69.0%, respectively, among the female participants. Generally, dyslipidaemia was more prevalent in those aged >40 years than in those <40 years, with the exception of increased LDL-c (25.1%), which was higher among the 20–40 years age group. There was no significant association between dyslipidaemia, age, and gender (p > 0.05 each).
Table 3 shows that combined dyslipidaemia of high TG and reduced HDL-c was predominant in males (77.9%), and most (37.6%) of them were >40 years. In addition, the male participants recorded a higher percentage (75.6%) for combined dyslipidaemia of high TG and elevated LDL-c levels (TG ≥150 mg/dL and LDL-c >100 mg/dL), with majority (40%) of these men being >40 years. Moreover, combined dyslipidaemia of high LDL-c and low HDL-c was also predominant in the male participants (65.1%) and in those aged above 40 years (34.9%). The female participants generally recorded lower percentages of the various combinations of dyslipidaemia as compared to their male counterparts. There was a significant association between gender and all combined dyslipidaemia.
From the study, 6.5% were underweight (BMI <18.5 kg/m2), and those with normal weight were 31.2% (BMI = 18.5–24.9 kg/m2). Out of the 215 respondents, 36.8% of the participants were found to be overweight, while 23.7% were obese. With regards to blood pressure, 26.0% of the participants had normal BP, while 30.3% were pre-hypertensive. The majority of the participants were hypertensive (43.7%), and more than half (80%) had family a history of diabetes (Figure 1).
The results in Table 4 show that 25.1% of the respondents were hypertensive with high TC, 20.0% were hypertensive with high TG, 29.3% were hypertensive with low HDL-c, and those having hypertension with increased LDL-c levels were 18.6%. Results from the Table 4 indicated that 14.9% of the respondents were obese, and at the same time exhibited high TC levels. The majority (43.7%) of the respondents who had family history of diabetes, also recorded significantly high TC (p = 0.004). In addition, 34.0% of the participants were identified with family history of diabetes and high TG levels, and a little above half (52.5%) had family history of diabetes and low HDL-c levels. There was a significant association between respondents with family history of diabetes and high TG (p = 0.019). Furthermore, a significant association was observed between BMI and low HDL-c levels (p = 0.020) at 95% confidence interval.

E.O.A. and C.O. established the research idea and objectives and supervised the overall study. M.E.A.A., E.A., and S.D contributed in designing the analyses, interpreting the findings, and drafting of the manuscript. E.A. and E.A.A. analyzed the data, proofread, and edited the text. All authors approved the final manuscript.

No funding was obtained for this study.

The authors declare no competing interest.

Limitation of the Study

The study could not describe the population′s lipid means against known T2DM population lipid values as those populations were not specific for newly diagnosed T2DM patients and included diabetes patients with >1 year of onset/diagnosis. 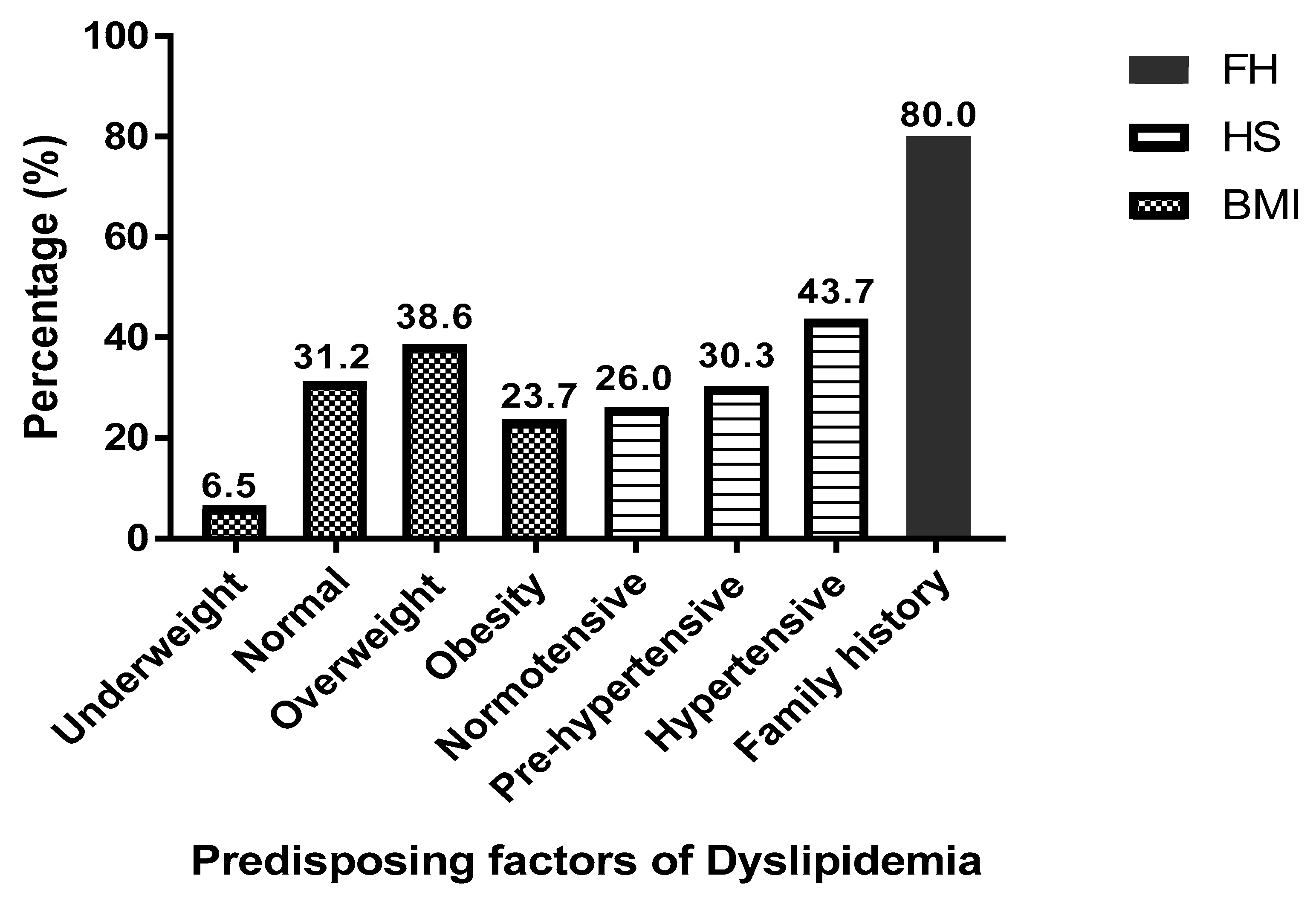