Background and objectives: Different scoring systems are used to stratify patients with chronic total coronary artery occlusions (CTO) according to disease complexity to predict the success of the percutaneous coronary intervention (PCI). Comparison among different CTO scoring systems and long-term outcome for patients with CTO after PCI has not been well established. The objectives of the study were to assess the ability of different disease severity scoring systems to predict, first, procedural success and, second, overall survival in patients with a successful procedure. Materials and Methods: A total of 551 patients who underwent elective CTO PCI in Riga East University hospital from January 2007 to December 2016 were included in the study. Four scoring systems (J CTO, PROGRESS CTO, CL, and CASTLE) were calculated. ROC curves were used to assess the association between scores and procedural success, and the Kaplan–Meier method and Cox regression were used to estimate the association with death from any cause after a successful procedure, Results: 454 of 551 cases were successful. With increasing disease complexity, the procedural success rate was significantly reduced in all scoring systems (p < 0.001): Area under the curve was 0.714 for J CTO score, 0.605 for PROGRESS CTO, 0.624 for CL and 0.641 for CASTLE scores. During the median 6.8 years of follow-up time, survival was better in the successful procedure group (p = 0.041). Among patients with procedural success, only PROGRESS and CASTLE scores showed an association with all-cause risk of death. After adjustment for baseline characteristics, patients having high PROGRESS score had almost twice higher risk of death (HR 1.81(95% CI 1.19–2.75)), and those with high and intermediate CASTLE score experienced almost four (HR 3.68(95% CI 1.50–9.05)) and two (HR 2.15, (95% CI 1.42–3.23)) times higher risk of death than the low score patients, respectively. Conclusions: All four CTO scoring systems had moderate ability to predict procedural success. More complex CTO PCI patients, assessed by PROGRESS and CASTLE scores, has worse all-cause survival in six to seven years after a successful procedure; whereas J CTO and CL scores had no association with survival. View Full-Text
Keywords: chronic total occlusion; percutaneous coronary intervention; scoring systems chronic total occlusion; percutaneous coronary intervention; scoring systems
►▼ Show Figures 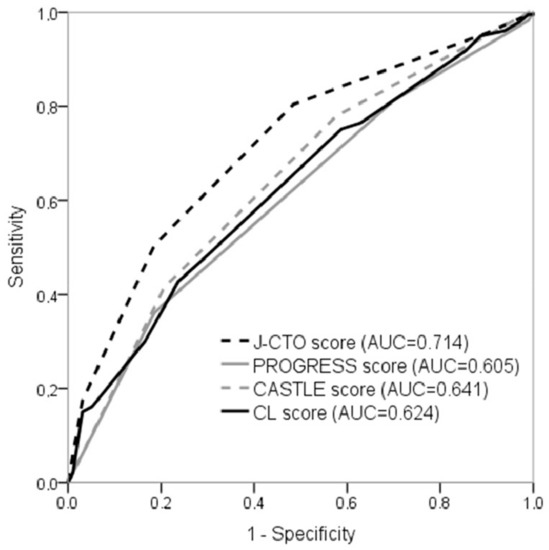