Hepatitis B Virus Genotypes in the Kingdom of Bahrain: Prevalence, Gender Distribution and Impact on Hepatic Biomarkers
Previous Article in Journal

Background and objectives: The use of antagonistic probiotic microorganisms and their byproducts represents a promising approach for the treatment of viral diseases. In the current work, the effect of exopolysaccharides (EPSs) produced by lactic acid bacteria from different genera on the structural and functional characteristics of cells and the development of adenoviral infection in vitro was studied. Materials and Methods: Cytotoxicity of six EPSs of lactic acid bacteria of the genera Lactobacillus, Leuconostoc and Pediococcus was determined by MTT (3-(4,5-dimethylthiazol-2-yl)-2,5-diphenyl tetrazolium bromide) assay. The influence of the EPSs on the infectivity of human adenovirus type 5 (HAdV-5) and on the cell cycle under a condition of adenovirus infection was studied using plaque reduction assay and flow cytometric analysis, respectively. Results: It was shown that exopolysaccharides were non-toxic to Madin-Darby bovine kidney cells (MDBK) as they reduced their viability by 3–17%. A change in the distribution of the cell cycle phases in the non-infected cell population treated with EPSs was observed. The analysis demonstrated an increase in the number of cells in the S phase by 47% when using EPSs 15a and a decrease in the number of cells in the G1 phase by 20–27% when treated with the EPSs 15a, 33a, and 19s. The use of EPSs did not led to the normalization of the life cycle of HAdV-5 infected cells to the level of non-infected cells. The EPSs showed low virucidal activity and reduced the HAdV-5 infectivity to 85%. Among the studied exopolysaccharides, anti-adenovirus activity was found for EPS 26a that is produced by Lactobacillus spp. strain. The treatment of cells with the EPS following virus adsorption completely (100%) suppressed the formation and release of HAdV-5 infectious. Conclusions: EPS 26a possessed distinct anti-HAdV-5 activity and the obtained data demonstrate the potential of using exopolysaccharides as anti-adenoviral agents. View Full-Text
Keywords: exopolysaccharides; lactic acid bacteria; human adenovirus type 5; antiviral activity; cell cycle exopolysaccharides; lactic acid bacteria; human adenovirus type 5; antiviral activity; cell cycle
►▼ Show Figures 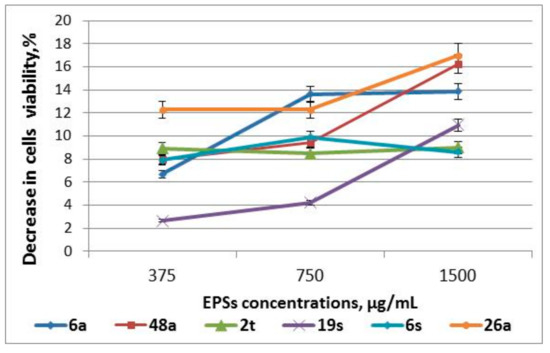