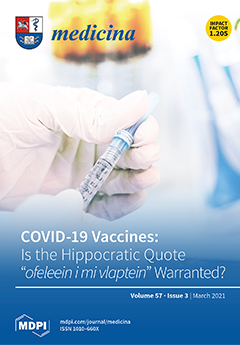 Cover Story (view full-size image): The novel SARS-CoV-2 pandemic has dramatically changed our lives, and urgent measures in terms of safe and effective vaccines are required. Within this narrative review, the burden of COVID-19 on society is explained and the history of vaccines is also briefly mentioned. Considering the classical Hippocratic principle “ofeleein i mi vlaptein”, which means either to help or not harm the patient, the procedures from bench-to-bed towards the development of COVID-19 vaccines are explained and potential pitfalls as a consequence of the accelerated vaccine development are underlined. View this paper
Previous Issue
Volume 57, February
Next Issue
Volume 57, April
We use cookies on our website to ensure you get the best experience. Read more about our cookies here.
Accept
We have just recently launched a new version of our website. Help us to further improve by taking part in this short 5 minute survey here. here.
Never show this again