To Enhance or Not to Enhance? The Role of Contrast Medium 18F-FDG PET/CT in Recurrent Ovarian Carcinomas
Previous Article in Journal

Background and Objectives: Primary gastric diffuse large-B cell lymphoma (DLBCL) is an aggressive lymphoma subtype with high 18F-FDG avidity but unclear criteria for 2-[18F]-FDG PET/CT in the evaluation of treatment response and prognostication. Our aim was to investigate whether the pretreatment 2-[18F]-FDG PET/CT variables may predict treatment response (at end of first-line therapy) and prognosis in primary gastric DLBCL. Materials and Methods: we included 57 patients with a diagnosis of primary gastric DLBCL and a baseline 2-[18F]-FDG PET/CT and an end of treatment PET/CT after 6 cycles of R-CHOP chemotherapy. We analyzed PET images qualitatively and semi-quantitatively by deriving the maximum standardized uptake value body weight (SUVbw), the maximum standardized uptake value lean body mass (SUVlbm), the maximum standardized uptake value body surface area (SUVbsa), lesion to liver SUVmax ratio (L-L SUV R), lesion to blood-pool SUVmax ratio (L-BP SUV R), metabolic tumor volume and total lesion glycolysis of gastric lesion (gMTV and gTLG), and total MTV (tMTV) and TLG. Survival curves were plotted according to the Kaplan–Meier analysis. Results: at a median follow up of 80 months, the median PFS and OS were 69 and 80 months. Baseline gMTV, gTLG, tMTV, and TLG were significantly higher in patients with incomplete response (partial response and progression) compared to complete response group. tMTV and TLG were confirmed to be independent prognostic factors both for PFS (p = 0.023 and p = 0.038) and OS (p = 0.038 and p = 0.026); instead, the other metabolic parameters were not related to outcome survival. Conclusions: high tMTV and TLG were significantly correlated with shorter survival (PFS and OS) and may predict incomplete response after therapy. View Full-Text
Keywords: primary gastric DLBCL; 2-[18F]-FDG PET/CT; MTV; TLG; diffuse large B cell lymphoma; prognosis primary gastric DLBCL; 2-[18F]-FDG PET/CT; MTV; TLG; diffuse large B cell lymphoma; prognosis
►▼ Show Figures 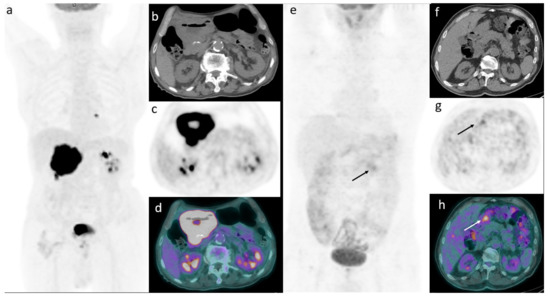