Non-celiac gluten sensitivity (NCGS) is a clinical entity characterized by the absence of celiac disease and wheat allergy in patients that trigger reproducible symptomatic responses to gluten-containing foods consumption. Due to the lack of sensitive and reproducible biomarkers for NCGS diagnosis, placebo-controlled gluten challenges must be carried out for its diagnosis. The gluten challenges can be either double- or single-blind, for research or clinical practice purposes, respectively. For improving our understanding about the magnitude and relevance of NCGS in different populations, epidemiological studies based on self-report have been carried out. However, the gluten challenge-based prevalence of NCGS remains to be estimated. Since NCGS was recently recognized as a clinical entity, more studies are needed to delve into NCGS pathogenesis, for instance, the molecular interactions between the suspected cereal grain components that trigger NCGS, such as fermentable oligo-, di-, monosaccharides, and polyols (FODMAPs) and amylase and trypsin inhibitors, and the immune system remains to be elucidated. Although still under debate, NCGS patients can be susceptible to only one or more than one of the NCGS triggers. The treatment of NCGS involves the dietary restriction of the suspected triggers of the disease, but there is controversial data about the effectiveness of different dietary interventions such as the gluten-free diet and low-FODMAP diet. Certainly, our understanding of NCGS is improving quickly due to the constant availability of new scientific information on this topic. Thus, the aim of the present narrative review is to present an up-to-date overview on NCGS from epidemiology to current therapy. View Full-Text
Keywords: gluten; NCGS; wheat sensitivity; NCWS gluten; NCGS; wheat sensitivity; NCWS
►▼ Show Figures 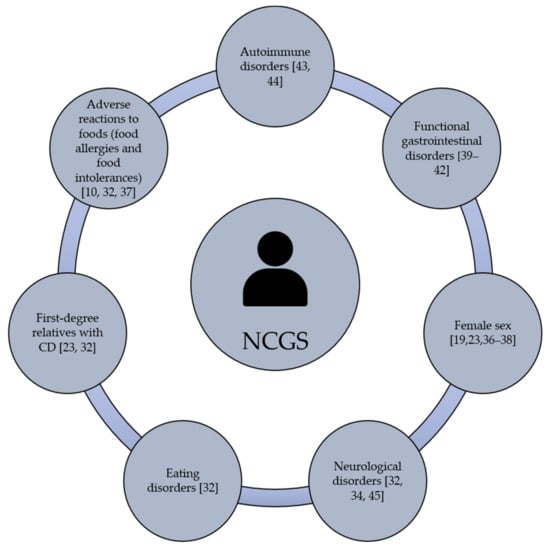