Background and Objectives: The aim of the present study was to compare the impact of an incremental exercise test on muscle stiffness in the rectus femoris (RF), vastus lateralis (VL), biceps femoris (BF), and gastrocnemius (GL) among road cyclists of three performance levels. Materials and Methods: The study group consisted of 35 cyclists grouped according to their performance level; elite (n = 10; professional license), sub-elite (n = 12; amateur license), and recreational (n = 13; cyclosportive license). Passive muscle stiffness was assessed using myometry before and after an incremental exercise test. Results: There was a significant correlation between time and category in the vastus lateralis with stiffness increases in the sub-elite (p = 0.001, Cohen’s d = 0.88) and elite groups (p = 0.003, Cohen’s d = 0.72), but not in the recreational group (p = 0.085). Stiffness increased over time in the knee extensors (RF, p < 0.001; VL, p < 0.001), but no changes were observed in the knee flexors (GL, p = 0.63, BF, p = 0.052). There were no baseline differences among the categories in any muscle. Conclusions: Although the performance level affected VL stiffness after an incremental exercise test, no differences in passive stiffness were observed among the main muscles implicated in pedaling in a resting state. Future research should assess whether this marker could be used to differentiate cyclists of varying fitness levels and its potential applicability for the monitoring of training load. View Full-Text
Keywords: cyclist; myometry; stiffness; incremental cycling test cyclist; myometry; stiffness; incremental cycling test
►▼ Show Figures 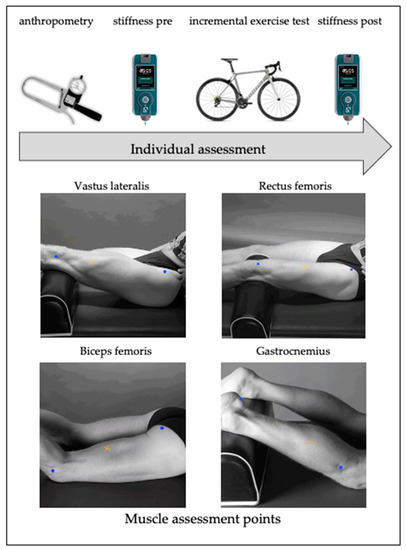