The Dilemma of Falls in Older Persons: Never Forget to Investigate the Syncope
Previous Article in Journal

TGF-β Physiology as a Novel Therapeutic Target Regarding Autoimmune Thyroid Diseases: Where Do We Stand and What to Expect

Background and Objectives: Neutrophil-to-lymphocyte ratio (NLR), a very low cost, widely available marker of systemic inflammation, has been proposed as a potential predictor of short-term outcome in patients with intracerebral hemorrhage (ICH). Methods: Patients with ICH admitted to the Neurology Department during a two-year period were screened for inclusion. Based on eligibility criteria, 201 patients were included in the present analysis. Clinical, imaging, and laboratory characteristics were collected in a prespecified manner. Logistic regression models and receiver operating characteristics (ROC) curves were used to assess the performance of NLR assessed at admission (admission NLR) and 72 h later (three-day NLR) in predicting in-hospital death. Results: The median age of the study population was 70 years (IQR: 61–79), median admission NIHSS was 16 (IQR: 6–24), and median hematoma volume was 13.7 mL (IQR: 4.6–35.2 mL). Ninety patients (44.8%) died during hospitalization, and for 35 patients (17.4%) death occurred during the first three days. Several common predictors were significantly associated with in-hospital mortality in univariate analysis, including NLR assessed at admission (OR: 1.11; 95% CI: 1.04–1.18; p = 0.002). However, in multivariate analysis admission, NLR was not an independent predictor of in-hospital mortality (OR: 1.04; 95% CI: 0.9–1.1; p = 0.3). The subgroup analysis of 112 patients who survived the first 72 h of hospitalization showed that three-day NLR (OR: 1.2; 95% CI: 1.09–1.4; p < 0.001) and age (OR: 1.05; 95% CI: 1.02–1.08; p = 0.02) were the only independent predictors of in-hospital mortality. ROC curve analysis yielded an optimal cut-off value of three-day NLR for the prediction of in-hospital mortality of ≥6.3 (AUC = 0.819; 95% CI: 0.735–0.885; p < 0.0001) and Kaplan–Meier analysis proved that ICH patients with three-day NLR ≥6.3 had significantly higher odds of in-hospital death (HR: 7.37; 95% CI: 3.62–15; log-rank test; p < 0.0001). Conclusion: NLR assessed 72 h after admission is an independent predictor of in-hospital mortality in ICH patients and could be widely used in clinical practice to identify the patients at high risk of in-hospital death. Further studies to confirm this finding are needed. View Full-Text
Keywords: intracerebral hemorrhage; neutrophil-to-lymphocyte ratio; in-hospital mortality; outcome intracerebral hemorrhage; neutrophil-to-lymphocyte ratio; in-hospital mortality; outcome
►▼ Show Figures 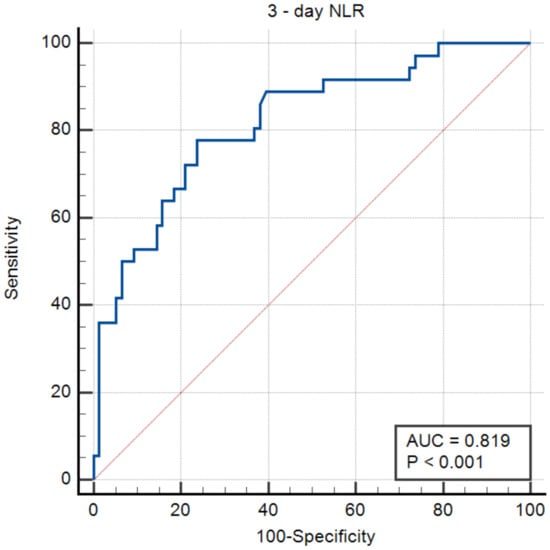