The Dilemma of Falls in Older Persons: Never Forget to Investigate the Syncope
Previous Article in Special Issue

The Challenges of Children with Bipolar Disorder

Background and Objectives: Unstable mixed episodes or rapid switching between opposite affective poles within the scope of short cycles was first characterized in 1967 by S. Mentzos as complex polymorphous states with chaotic overlap of manic and depressive symptoms. Well-known examples include antidepressant-induced mania/hypomania and rapid/ultra-rapid/ultradian cycling, when clinicians observe an almost continuous mixed state with a constant change of preponderance of manic or depressive symptoms. Achieving stable remission in these cases is challenging with almost no data on evidence-based treatment. When mood stabilizers are ineffective, electroconvulsive therapy (ECT) has been suggested. Objectives: After reviewing the evidence from available literature, this article presents our own clinical experience of ECT efficacy and tolerability in patients with ultra-rapid cycling bipolar disorder (BD) and unstable mixed states. Materials and Methods: We conducted an open, one-year observational prospective study with a “mirror image” design, including 30 patients with rapid and ultra-rapid cycling BD on long-term mood stabilizer treatment (18 received lithium carbonate, 6 on valproate and 6 on carbamazepine) with limited effectiveness. A bilateral ECT course (5–10 sessions) was prescribed for regaining mood stability. Results: ECT was very effective in 12 patients (40%) with a history of ineffective mood stabilizer treatment who achieved and maintained remission; all of them received lithium except for 1 patient who received carbamazepine and 2 with valproate. Nine patients (30%) showed partial response (one on carbamazepine and two on valproate) and nine patients (30%) had no improvement at all (four on carbamazepine and two on valproate). For the whole sample, the duration of affective episodes was significantly reduced from 36.05 ± 4.32 weeks in the year prior to ECT to 21.74 ± 12.14 weeks in the year post-ECT (p < 0.001). Depressive episodes with mixed and/or catatonic features according to DSM-5 specifiers were associated with a better acute ECT response and/or long-term mood stabilizer treatment outcome after ECT. Conclusions: ECT could be considered as a useful option for getting mood instability under control in rapid and ultra-rapid cycling bipolar patients. Further randomized trials are needed to confirm these results. View Full-Text
Keywords: anticonvulsants; bipolar disorder; catatonia; ECT; lithium; mixed states; ultra-rapid cycling anticonvulsants; bipolar disorder; catatonia; ECT; lithium; mixed states; ultra-rapid cycling
►▼ Show Figures 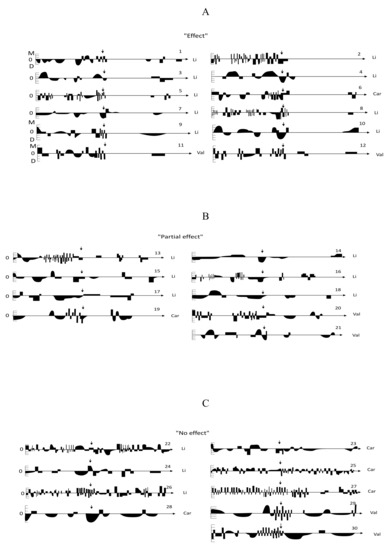