The demosponge Suberites domuncula has been described to contain high levels of a proteinaceous toxin, Suberitine, that displays haemolytic activityIn the present study this 7–8 kDa polypeptide has been isolated and was shown to exhibit also cytotoxic effects on cells of the same species. Addition of retinal, a recently identified metabolite of β-carotene that is abundantly present in S. domuncula was found to reduce both the haemolytic and the cell toxic activity of Suberitine at a molar ratio of 1:1. Spectroscopic analyses revealed that the interaction between β-carotene and Suberitine can be ascribed to a reversible energy transfer reaction. The enzyme that synthesises retinal in the sponge system is the β,β-carotene-15,15′-dioxygenase [carotene dioxygenase]. In order to clarify if this enzyme is the only β-carotene-metabolizing enzyme a further oxygenase had been identified and cloned, the (related) carotenoid oxygenase. In contrast to the dioxygenase, the carotenoid oxygenase could not degrade β-carotene or lycopene in Escherichia coli strains that produced these two carotenoids; therefore it had been termed related-carotenoid oxygenase. Exposure of primmorphs to light of different wavelengths from the visible spectrum resulted after 3 days in a strong upregulation of the dioxygenase in those 3D-cell aggregates that had been incubated with β-carotene. The strongest effect is seen with blue light at a maximum around 490 nm. It is concluded that the toxin Suberitine is non-covalently modified by retinal, the cleavage product from β-carotene via the enzyme carotene dioxygenase, a light inducible oxygenase. Hence, this study highlights that in S. domuncula the bioactive metabolite, retinal, has the property to detoxify its homologous toxin. View Full-Text
Keywords: Suberitine; β-carotene; retinal; β-carotene dioxygenase; sponges; Suberites domuncula Suberitine; β-carotene; retinal; β-carotene dioxygenase; sponges; Suberites domuncula
►▼ Show Figures 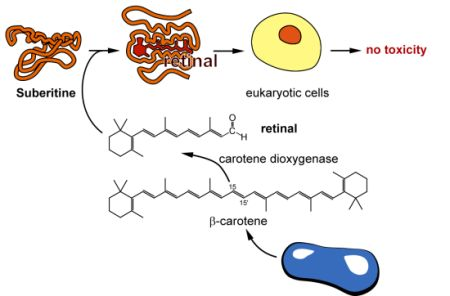