On the Chemistry, Toxicology and Genetics of the Cyanobacterial Toxins, Microcystin, Nodularin, Saxitoxin and Cylindrospermopsin
Previous Article in Journal

Pectenotoxins (PTXs) are a group of lipophilic algal toxins. These toxins have been found in algae and shellfish from Japan, New Zealand, Ireland, Norway and Portugal. PTX profiles vary with geographic location of collection site. The aim of the present study was to investigate PTX profiles from the Yellow Sea, China. The sampling location was within an aquatic farm (N36°12.428´, E120°17.826´) near the coast of Qingdao, China, in the Yellow Sea from 28July to 29August 2006. PTXs in seawater were determined using a solid phase adsorption toxin tracking (SPATT) method. PTXs were analyzed by HPLC-MSMS. PTX-2, PTX-2 sec acid (PTX-2 SA) and 7-epi-PTX-2 SA were found in seawater samples. The highest levels of PTXs (107 ng/g of resin PTX-2, 50 ng/g of resin PTX-2 SA plus 7-epi-PTX-2 SA) in seawater were found on 1 August, 2006. From 1 August to 29 August, the levels of PTX-2 and PTX-2 SA decreased. In the same area, the marine algae, Dinophysis acuminata was found in the seawater in the summer months of 2006. This indicated that Dinophysis acuumuta might be the original source of PTXs. PTX-11 and PTX-12a/b were not found in seawater. View Full-Text
Keywords: pectenotoxin; mussel; mytilus edulis; LC-MSMS; SPATT; passive sampling pectenotoxin; mussel; mytilus edulis; LC-MSMS; SPATT; passive sampling
►▼ Show Figures 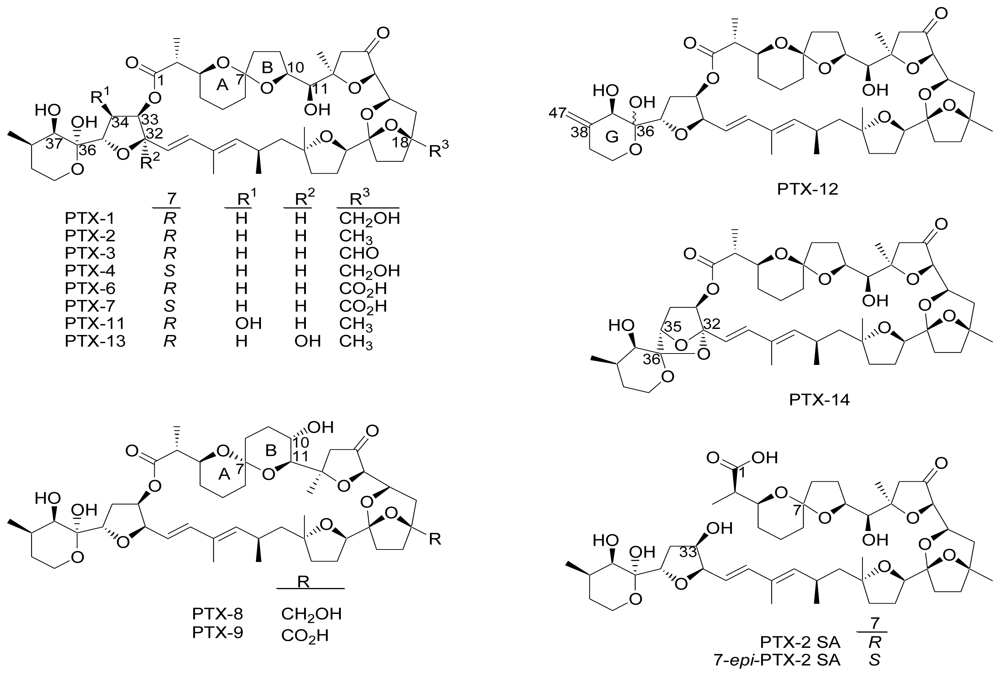