Feasibility of Measuring Tobacco Smoke Air Pollution in Homes: Report from a Pilot Study
Next Article in Special Issue

Association of PAEs with Precocious Puberty in Children: A Systematic Review and Meta-Analysis
Previous Article in Journal

Epidemiology of Unintentional Child Injuries in the Makwanpur District of Nepal: A Household Survey
Previous Article in Special Issue

Background: Exposure to artificial or natural endocrine disruptors, such as bisphenol A (BPA) and phytoestrogens has been demonstrated to have health effects, especially in children. Biomonitoring of BPA and phytoestrogens in human urine can be used to assess the intake levels of these compounds. Methods: In this study, BPA and phytoestrogens in urine specimens (n = 256) collected from children in China were measured by liquid chromatography (LC)-tandem mass spectrometry (MS/MS). Results: BPA was detected in most specimens, with a geometric mean concentration of 1.58 ng/mL. For the first time, levels of urinary phytoestrogens in Chinese children were reported. Daidzein and enterolactone are the typical isoflavones and lignans compounds in urine, respectively. Conclusions: Relatively high levels of urinary BPA indicate an increasing risk of BPA exposure to Chinese children. Urinary concentrations of daidzein in Chinese children are higher when compared with those reported in the U.S. children, while concentrations of urinary enterolactone and enterodiols are significantly lower. This suggests a significant difference in phytoestrogen intake between the children from China and from the U.S. View Full-Text
Keywords: bisphenol A; phytoestrogens; biomonitoring; children; China bisphenol A; phytoestrogens; biomonitoring; children; China
►▼ Show Figures 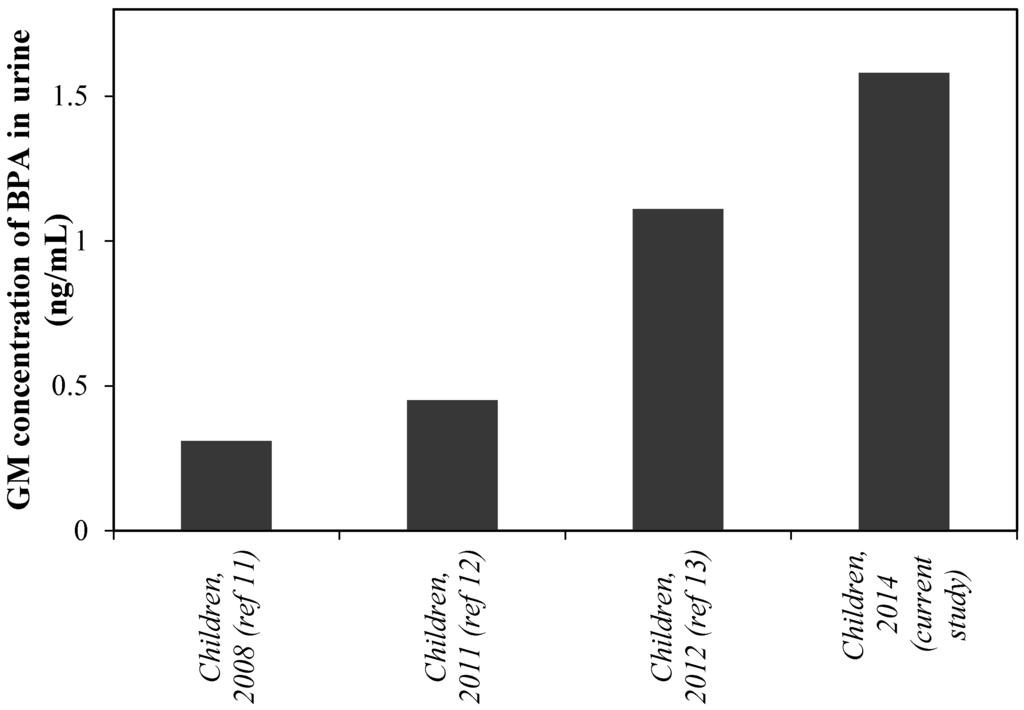