Epidemiology of Unintentional Child Injuries in the Makwanpur District of Nepal: A Household Survey

Introduction: Within Canada, injuries are the leading cause of death amongst children fourteen years of age and younger, and also one of the leading causes of morbidity. Low Socio Economic Status (SES) seems to be a strong indicator of a higher prevalence of injuries. This study aims to identify hotspots for pediatric Traumatic Brain Injury (TBI) and examines the relationship between SES and pediatric TBI rates in greater Vancouver, British Columbia (BC), Canada. Methods: Pediatric TBI data from the BC Trauma Registry (BCTR) was used to identify all pediatric TBI patients admitted to BC hospitals between the years 2000 and 2013. Spatial analysis was used to identify hotspots for pediatric TBI. Multivariate analysis was used to distinguish census variables that were correlated with rates of injury. Results: Six hundred and fifty three severe pediatric TBI injuries occurred within the BC Lower Mainland between 2000 and 2013. High rates of injury were concentrated in the East, while low rate clusters were most common in the West of the region (more affluent neighborhoods). A low level of education was the main predictor of a high rate of injury (OR = 1.13, 95% CI = 1.03–1.23, p-Value 0.009). Conclusion: While there was a clear relationship between different SES indicators and pediatric TBI rates in greater Vancouver, income-based SES indicators did not serve as good predictors within this region. View Full-Text
Keywords: traumatic brain injury; pediatric injury; injury hotspot; injury prevention; geographic information systems traumatic brain injury; pediatric injury; injury hotspot; injury prevention; geographic information systems
►▼ Show Figures 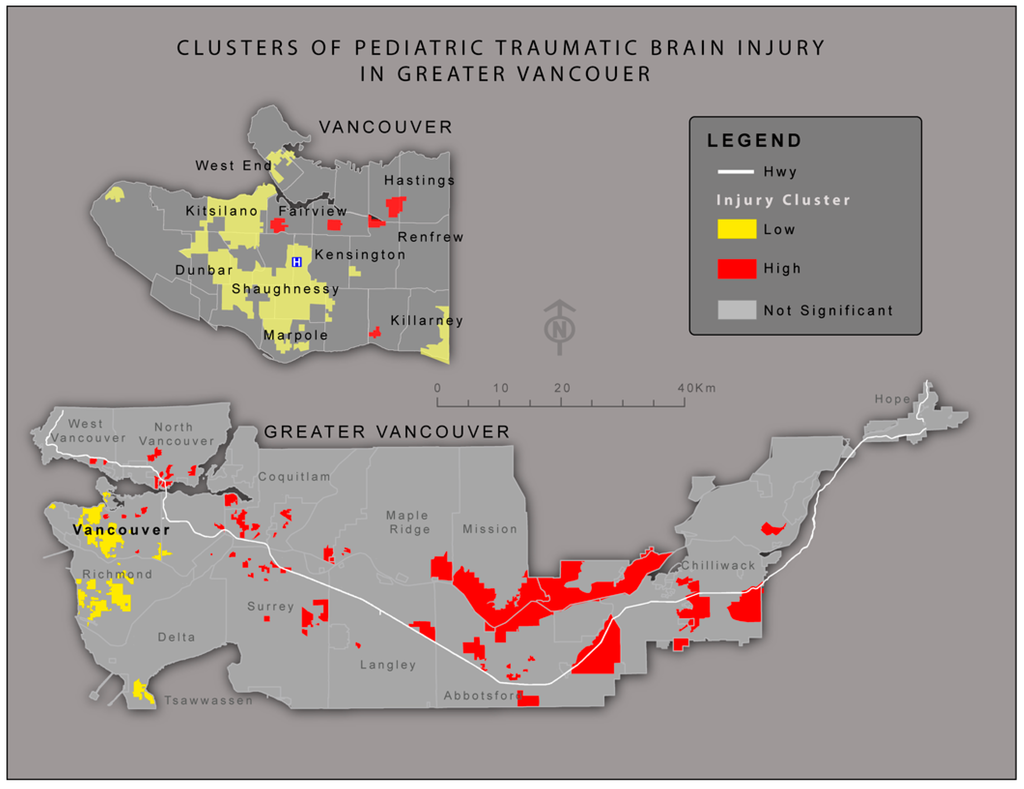