Trends in Water Level and Flooding in Dhaka, Bangladesh and Their Impact on Mortality
Previous Article in Journal 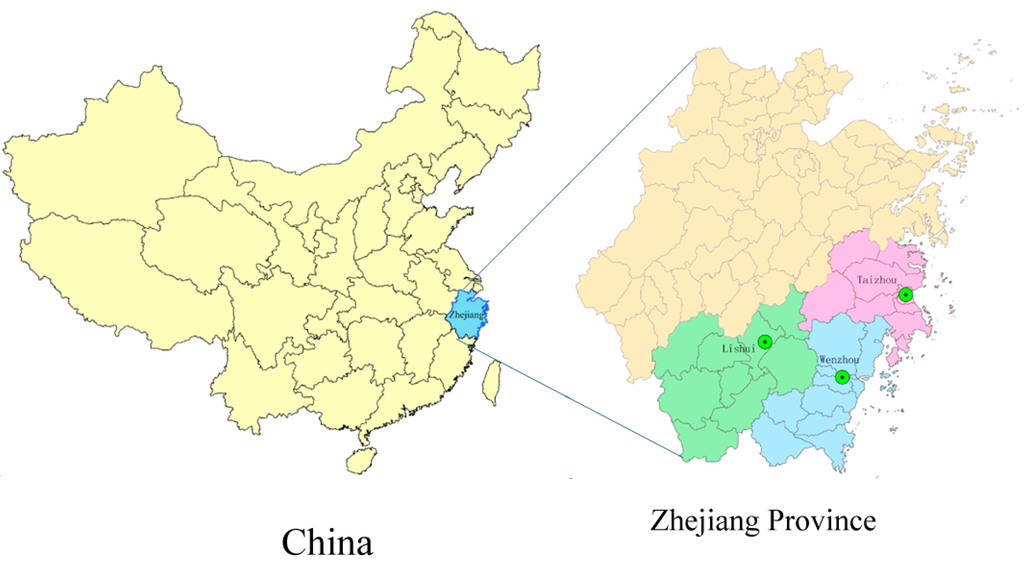 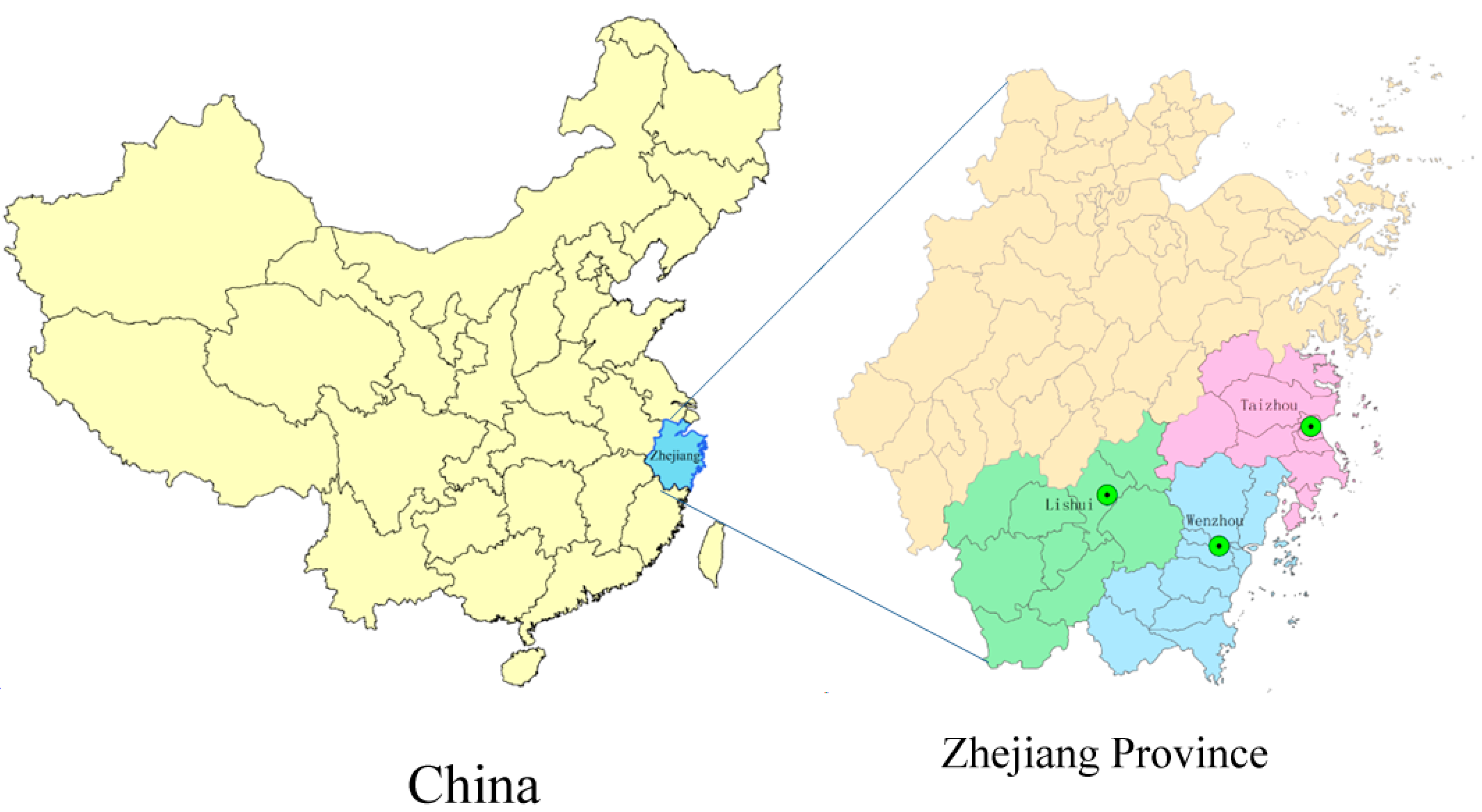 Report forms of notified cases of infectious diarrhea in the study areas in Zhejiang Province from 2005 to 2011 were obtained from the National Notifiable Disease Surveillance System (NDSS). The NDSS defines infectious diarrhea as a group of human diseases mainly caused by microbes (including bacteria, parasites, and viruses) that have diarrhea as the typical symptom. Diarrheal diseases include cholera, typhoid, paratyphoid, dysentery (bacillary dysentery and amebic dysentery) and other infectious diarrhea. The category of other infectious diarrhea includes all kinds of infectious diarrhea except cholera, dysentery, typhoid and paratyphoid; examples are salmonella enteritis and rotavirus enteritis. Among these, vibrio para-haemolyticus and salmonella accounted for 65.26% and 20.70% of pathogens in reported bacterial diarrhea. In 2008, the percentage of rotavirus and adenovirus in all reported viral diarrhea was 92.75% and 4.34%, respectively [19]. There were no or few cases of cholera, amebic dysentery, typhoid, and paratyphoid during the study period, thus the analyses focused on bacillary dysentery and other infectious diarrhea. For each case, information on age, gender, date of onset, classification of disease, and location of disease occurrence were obtained from the NDSS records. Cases of bacillary dysentery were diagnosed by physicians, based on the history of exposure, clinical manifestation, and laboratory testing. Symptoms often include abdominal pain, diarrhea, tenesmus, etc. Increase in white blood cell counts (WBC ≥ 15/HPF 400 times) and isolation of Shigella from patients’ feces help make a definite diagnosis [20]. All other infectious diarrhea cases were diagnosed by physicians based on the joint evidence from the history of exposure, clinical symptoms, and laboratory test results [21]. The National Communicable Disease Control Act requires physicians in hospitals to report cases of infectious diarrhea to the local center for disease control and prevention within 24 h.

In this study, a unidirectional 1:1 case-crossover design combined with conditional logistic regression models were used to analyze the exposure odds for the case period compared with the control period. Case-crossover design is an effective method to measure the influence of transient exposure to acute diseases [23]. As in a matched case-control study, this design compares each case’s exposure before a case-defining event with that case’s exposure during other period. Because this design is similar to a crossover study, in which each case serves as their own control, characteristics that did not change between case and control periods, such as age, sex, geographic region and so on could not confound the association between tropical cyclones and infectious diarrhea [24]. The case period in this study includes the exposure period to the typhoon and the following maximum incubation period (7 days for bacillary dysentery and 14 days for other infectious diarrheal disease). Control periods were one week for bacillary dysentery and two weeks for other infectious diarrhea before the first onset of case reports. If the estimated date of control day overlapped with a case period, another period one or two prior weeks would be chosen until all control days were not in the case period. Thus, each case day was equally matched with one control day. All of the cases occurring on a given day shared the same exposures in the case and control periods.
Principal component analysis (PCA) was used to reduce the dimensionality of interrelated variables, while retaining the maximum variability in the data [25]. In order to eliminate multicollinearity between meteorological factors, variables except tropical cyclone, DP, MaWV, and EWV were processed using PCA [26]. Principal components (PCs) were calculated and used to represent all other meteorological factors; no multicollinearity between PCs, DP, MaWV and EWV was observed. Based on daily disease cases records, we estimated the odds ratio (OR) and 95% confidence interval (CI) of bacillary dysentery and other infectious diarrhea for different categories of tropical cyclones using the multivariate logistic regression model. In this model, DP, MaWV, EWV and PCs were adjusted. When OR and 95%CI due to exposure to precipitation were calculated, we used grade 0 (0–9.9 mm) as the reference group and adjusted MaWV, EWV, and PCs in the same model. In addition, we calculated the impacts of different precipitation levels on bacillary dysentery and other infectious diarrhea in the two strata: tropical storms and typhoons. The equation of the model is: where P is the probability of suffering disease, β0 is the intercept, β1, β2,... βm are partial regression coefficients, TC is the category of tropical cyclone, PC1, PC2,... PCn are principal components.
Taking into account the incubation period of infectious diarrhea and disease management, we considered lagged effects of lag 0–7 days (e.g., lag 7 means the lagged effect of exposure on the disease at the seventh day after the case period) [27]. All statistical analyses were conducted using SPSS 21.0.

3.1. Basic Information on Tropical Cyclones, Daily Precipitation, and Cases of Infectious Diarrhea during the Study Period

From 2005 to 2011, seven tropical cyclones landed on Zhejiang province, including three tropical storms, three severe typhoons, and one super typhoon. Details of each event are presented in Table 1.

Table 1. Basic information of tropical cyclones landing in the study areas from 2005–2011.
Daily precipitation during the study period in the landing city is described in Figure 2. The number of cases of bacillary dysentery and other infectious diarrhea in the landing city are also listed in Figure 2. Description and analyses of the impacts on cholera, amebic dysentery, typhoid, and paratyphoid during the study period were not included due to limited numbers of cases. 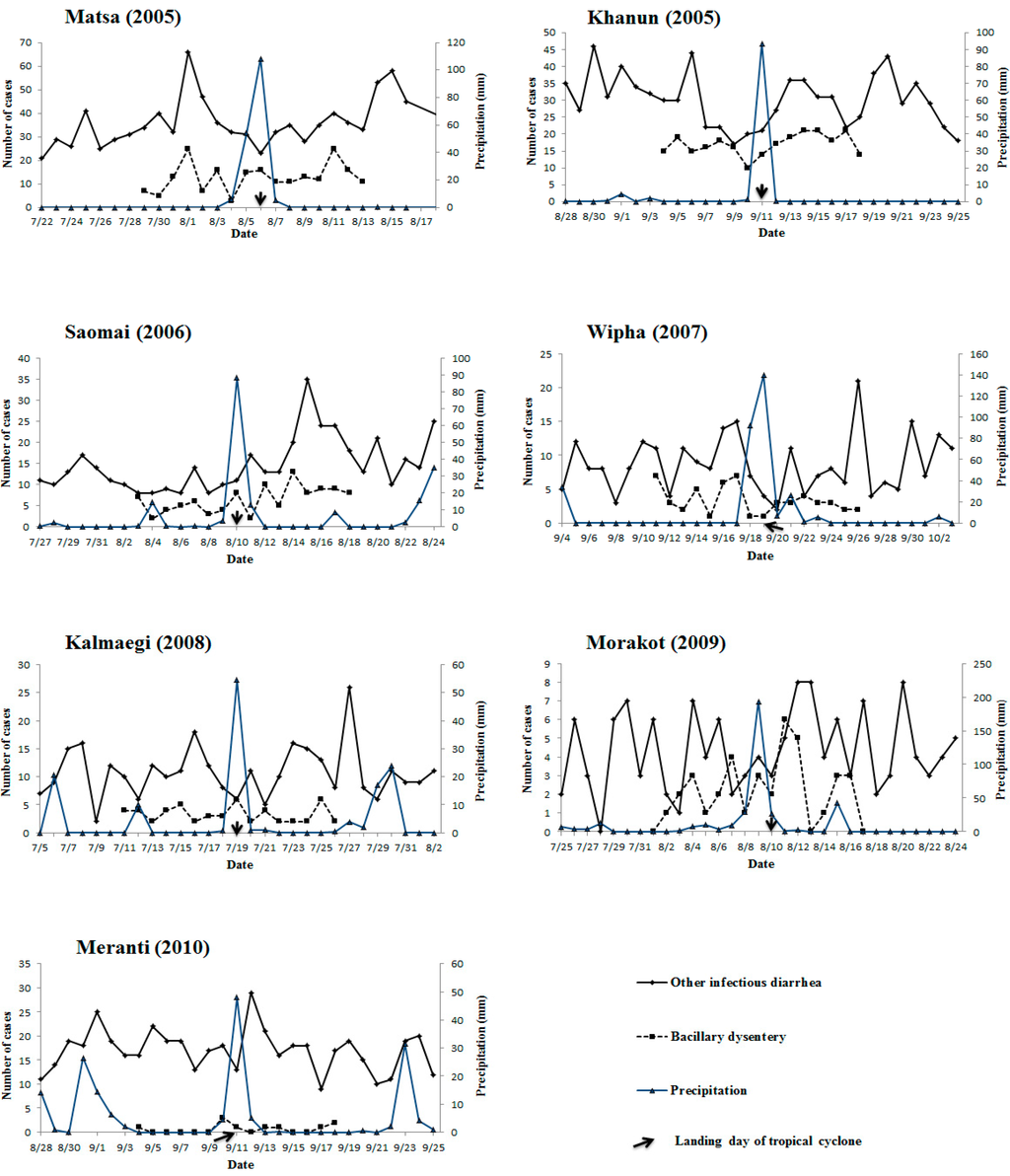 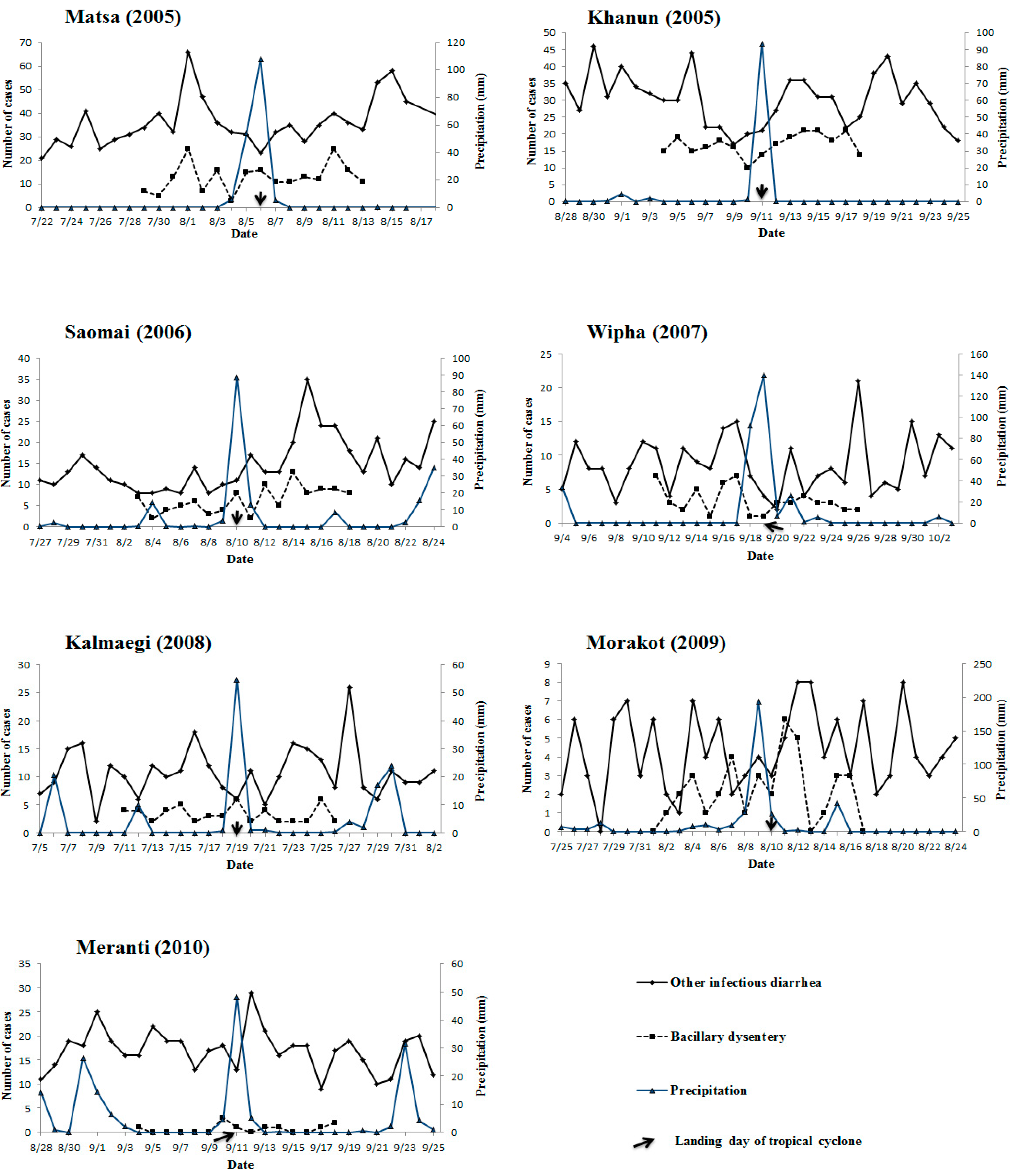 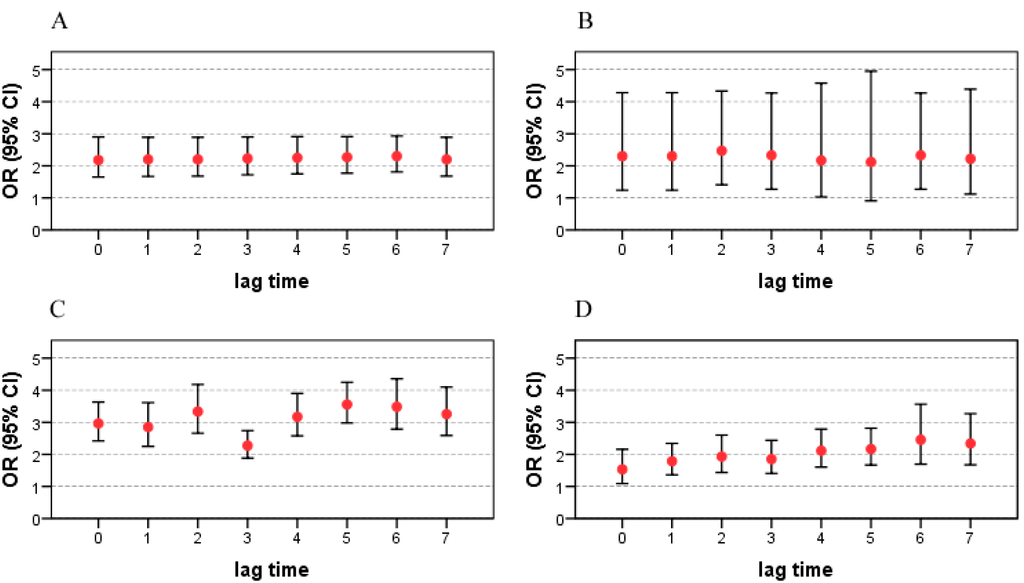 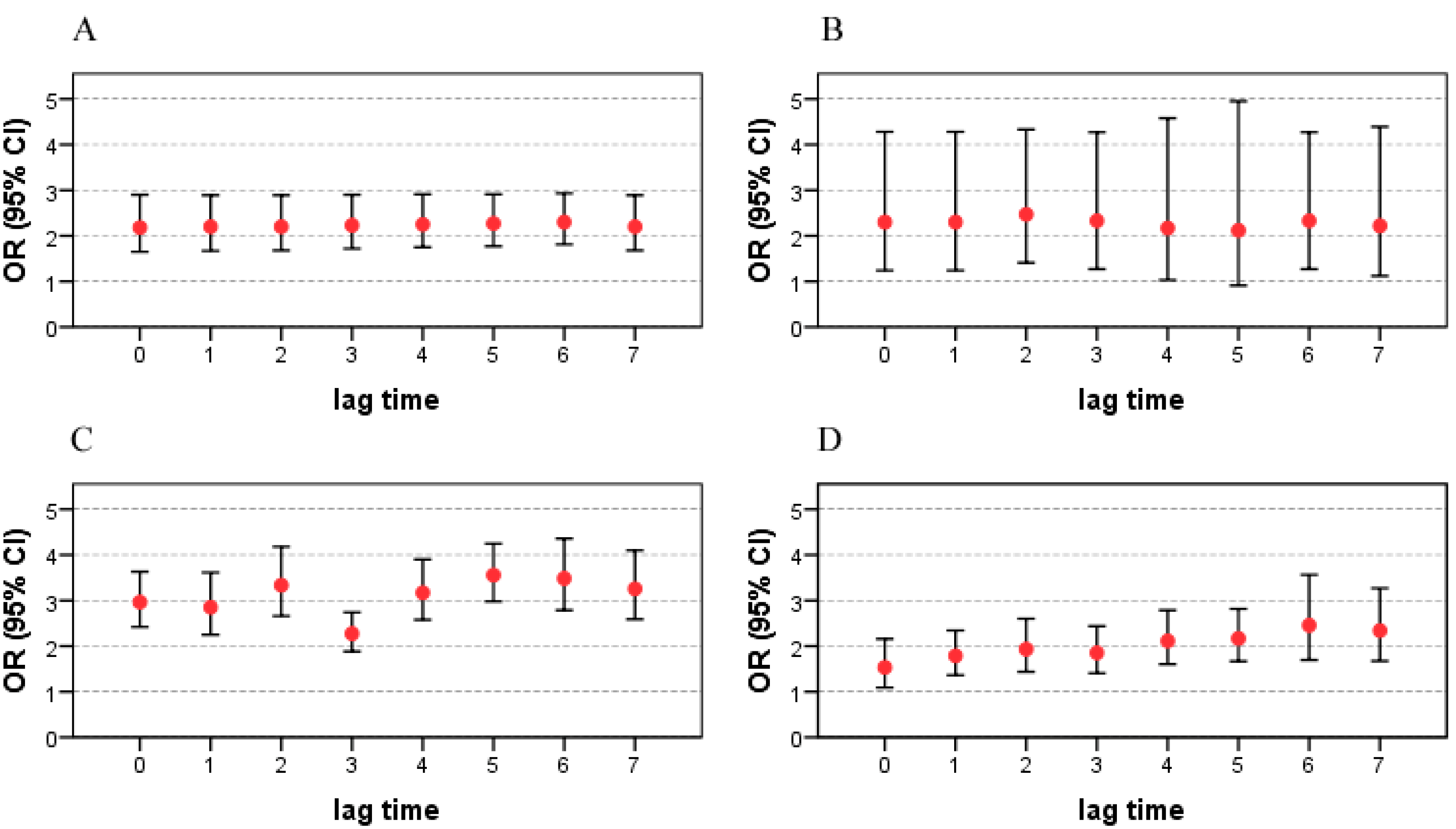 3.3. Effects of Precipitation on Infectious Diarrhea 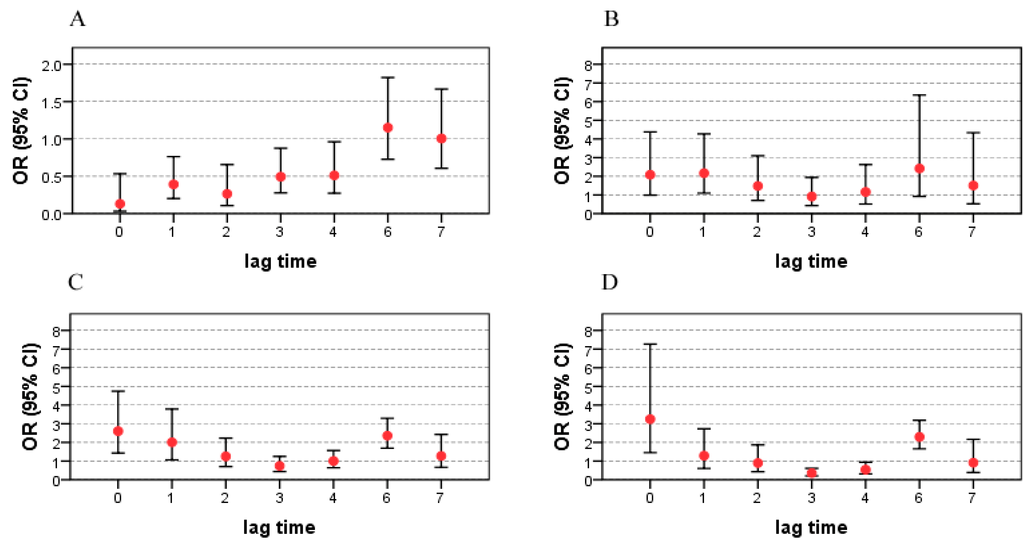 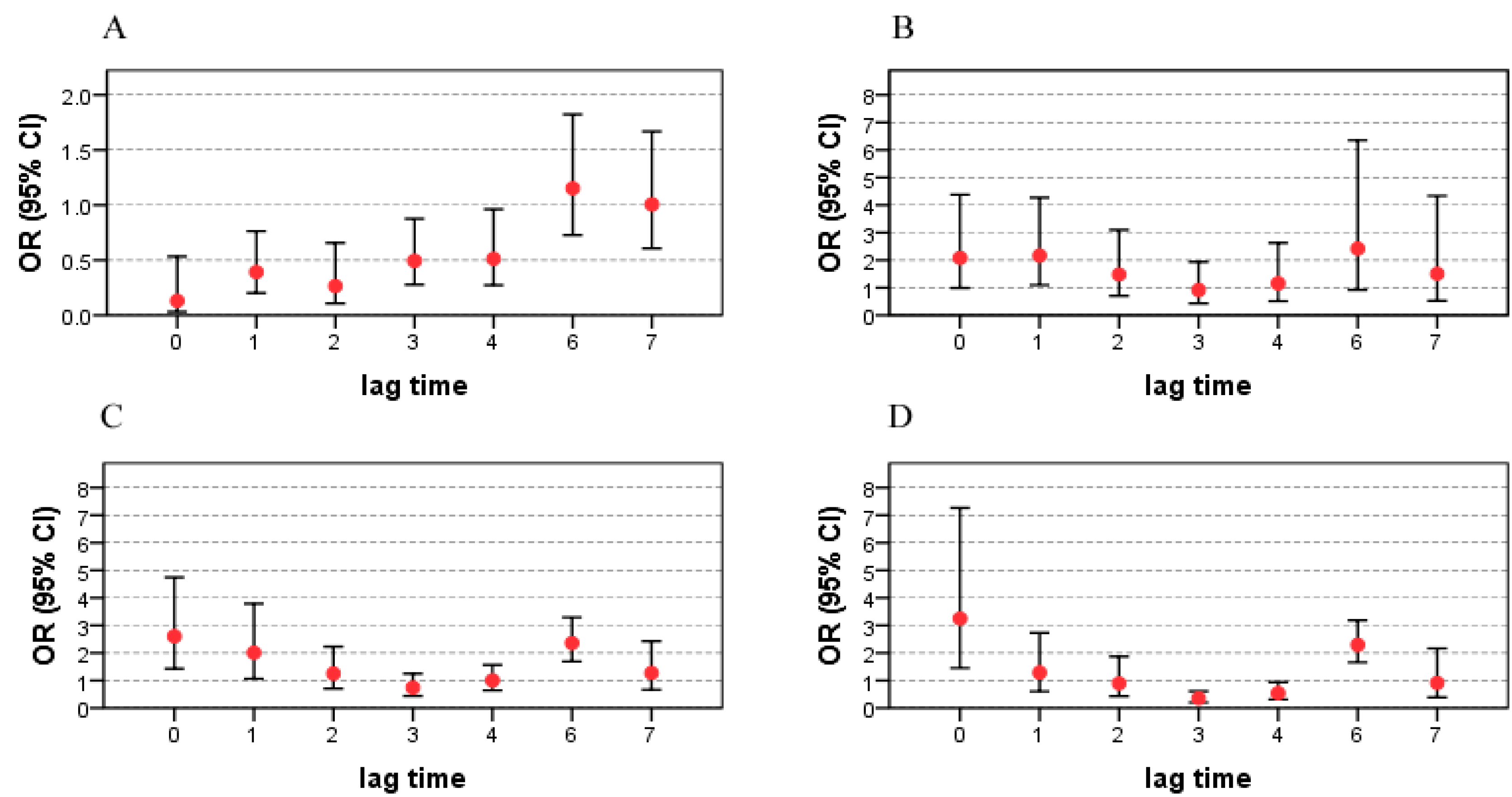 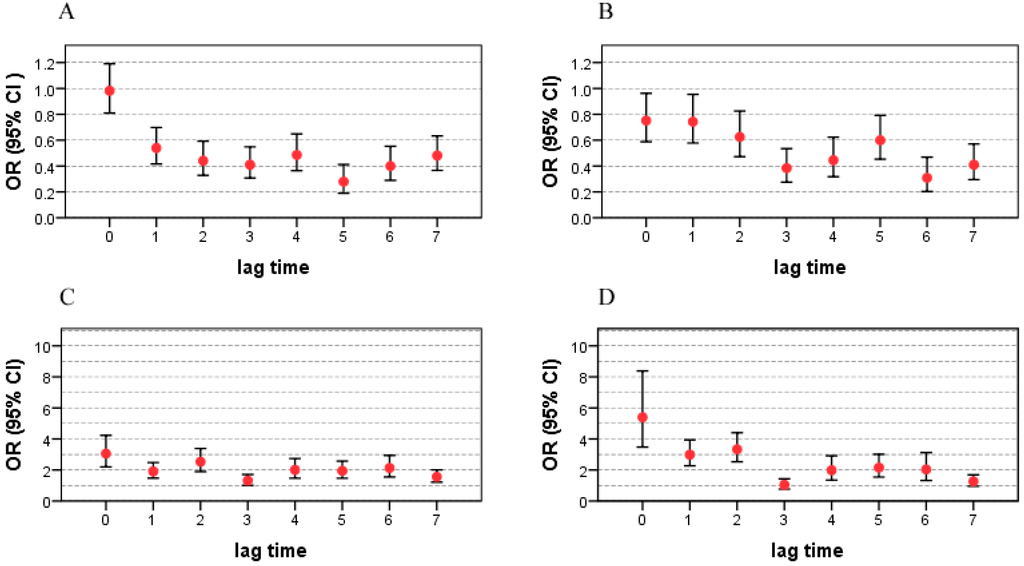 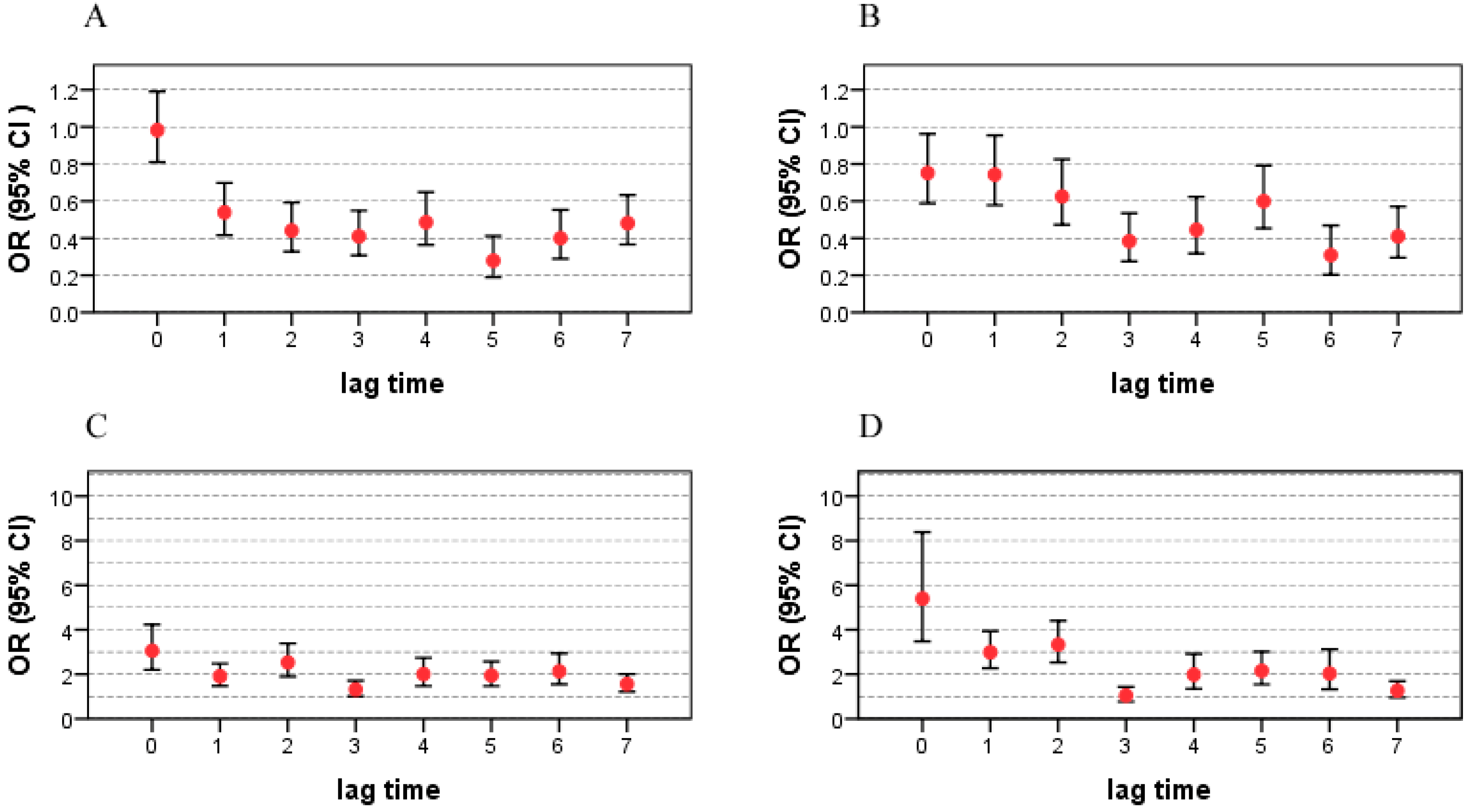 Our study shows that both tropical storm and typhoon could increase the risk of bacillary dysentery and other infectious diarrhea in the study areas in China. Tropical cyclone precipitation is a risk factor for bacillary dysentery and other infectious diarrhea when it reaches 25 mm and 50 mm or above. These findings may assist in public health preparation to reduce the adverse health impacts from tropical cyclones.

The study was supported by the National Basic Research Program of China (973 Program) (Grant No. 2012CB955500-955502). We appreciate National Notifiable Disease Surveillance System as well as China Meteorological Data Sharing Service System for providing data for our research.