Emerging studies show that dysregulation of the receptor of activated protein kinase C1 (RACK1) plays a crucial role in tumorigenesis and progression of various cancers. However, the biological function and underlying mechanism of RACK1 in glioma remains poorly defined. Here, we found that RACK1 was significantly up-regulated in glioma tissues compared with normal brain tissues, being closely related to clinical stage of glioma both in mRNA and protein levels. Moreover, Kaplan-Meier analysis demonstrated that patients with high RACK1 expression had a poor prognosis (p = 0.0062, HR = 1.898, 95% CI: 1.225–3.203). In vitro functional assays indicated that silencing of RACK1 could dramatically promote apoptosis and inhibit cell proliferation, migration, and invasion of glioma cells. More importantly, knockdown of RACK1 led to a vast accumulation of cells in G0/G1 phase and their reduced proportions at the S phase by suppressing the expression of G1/S transition key regulators Cyclin D1 and CDK6. Additionally, this forced down-regulation of RACK1 significantly suppressed migration and invasion via inhibiting the epithelial-mesenchymal transition (EMT) markers, such as MMP2, MMP9, ZEB1, N-Cadherin, and Integrin-β1. Collectively, our study revealed that RACK1 might act as a valuable prognostic biomarker and potential therapeutic target for glioma. View Full-Text
Keywords: RACK1; cell cycle; epithelial-mesenchymal transition; prognosis RACK1; cell cycle; epithelial-mesenchymal transition; prognosis
►▼ Show Figures 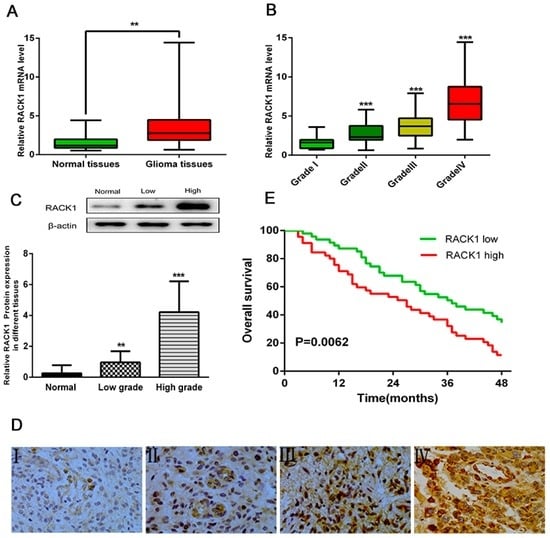