Nutrition in the First 1000 Days: The Origin of Childhood Obesity
Previous Article in Journal

Antibiotics in Wastewater of a Rural and an Urban Hospital before and after Wastewater Treatment, and the Relationship with Antibiotic Use—A One Year Study from Vietnam
Previous Article in Special Issue

The Diet of Preschool Children in the Mediterranean Countries of the European Union: A Systematic Review

Diet before and during Pregnancy and Offspring Health: The Importance of Animal Models and What Can Be Learned from Them

This review article outlines epidemiologic studies that support the hypothesis that maternal environment (including early nutrition) plays a seminal role in determining the offspring’s long-term health and metabolism, known as the concept of Developmental Origins of Health and Diseases (DOHaD). In this context, current concerns are particularly focused on the increased incidence of obesity and diabetes, particularly in youth and women of child-bearing age. We summarize key similarities, differences and limitations of various animal models used to study fetal programming, with a particular focus on placentation, which is critical for translating animal findings to humans. This review will assist researchers and their scientific audience in recognizing the pros and cons of various rodent and non-rodent animal models used to understand mechanisms involved in fetal programming. Knowledge gained will lead to improved translation of proposed interventional therapies before they can be implemented in humans. Although rodents are essential for fundamental exploration of biological processes, other species such as rabbits and other domestic animals offer more tissue-specific physiological (rabbit placenta) or physical (ovine maternal and lamb birth weight) resemblances to humans. We highlight the important maternal, placental, and fetal/neonatal characteristics that contribute to developmentally programmed diseases, specifically in offspring that were affected in utero by undernutrition, overnutrition or maternal diabetes. Selected interventions aimed at prevention are summarized with a specific focus on the 1000 days initiative in humans, and maternal exercise or modification of the n-3/n-6 polyunsaturated fatty acid (PUFA) balance in the diet, which are currently being successfully tested in animal models to correct or reduce adverse prenatal programming. Animal models are essential to understand mechanisms involved in fetal programming and in order to propose interventional therapies before they can be implemented in humans. Non-rodent animals are particularly important and should not be neglected, as they are often more physiologically-appropriate models to mimic the human situation. View Full-Text
Keywords: DOHaD; fetal programming; rodent and non-rodent animal models; 1000 days DOHaD; fetal programming; rodent and non-rodent animal models; 1000 days
►▼ Show Figures 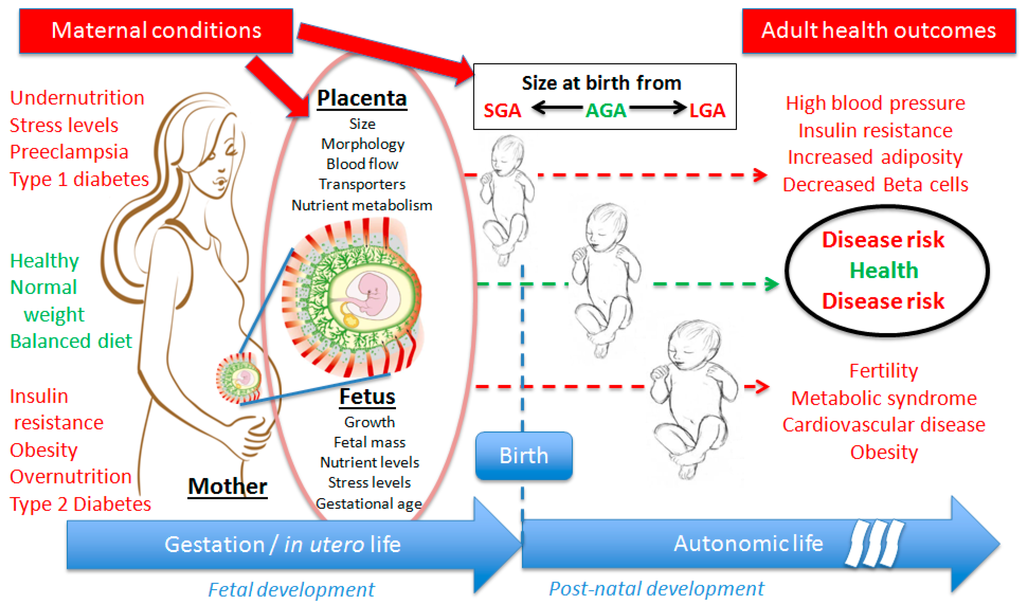 
Chavatte-Palmer P, Tarrade A, Rousseau-Ralliard D. Diet before and during Pregnancy and Offspring Health: The Importance of Animal Models and What Can Be Learned from Them. International Journal of Environmental Research and Public Health. 2016; 13(6):586. https://0-doi-org.brum.beds.ac.uk/10.3390/ijerph13060586


Chavatte-Palmer, Pascale, Anne Tarrade, and Delphine Rousseau-Ralliard. 2016. "Diet before and during Pregnancy and Offspring Health: The Importance of Animal Models and What Can Be Learned from Them" International Journal of Environmental Research and Public Health 13, no. 6: 586. https://0-doi-org.brum.beds.ac.uk/10.3390/ijerph13060586