The Spatiotemporal Trend of City Parks in Mainland China between 1981 and 2014: Implications for the Promotion of Leisure Time Physical Activity and Planning
Next Article in Special Issue

A Marine Bacterium, Bacillus sp. Isolated from the Sediment Samples of Algoa Bay in South Africa Produces a Polysaccharide-Bioflocculant

Uchechukwu U. Nwodo
1,2 and

Bioflocculants mediate the removal of suspended particles from solution and the efficiency of flocculation is dependent on the characteristics of the flocculant. Apart from the merits of biodegradability and harmlessness, bioflocculants could be viable as industrially relevant flocculants as they are a renewable resource. Additionally, the shortcomings associated with the conventionally used flocculants such as aluminium salts and acrylamide polymers, which include dementia and cancer, highlight more the need to use bioflocculants as an alternative. Consequently, in this study a marine sediment bacterial isolate was screened for bioflocculant production. Basic local alignment search tools (BLAST) analysis of 16S ribosomal deoxyribonucleic acid (rDNA) sequence of the bacterial isolate showed 98% similarity to Bacillus thuringiensis MR-R1. The bacteria produced bioflocculant optimally with inoculum size (4% v/v) (85%), glucose (85.65%) and mixed nitrogen source (urea, ammonium chloride and yeast extract) (75.9%) and the divalent cation (Ca2+) (62.3%). Under optimal conditions, a maximum flocculating activity of over 85% was attained after 60 h of cultivation. The purified polysaccharide-bioflocculant flocculated optimally at alkaline pH 12 (81%), in the presence of Mn2+ (73%) and Ca2+ (72.8%). The high flocculation activity shown indicates that the bioflocculant may contend favourably as an alternative to the conventionally used flocculants in water treatment. View Full-Text
Keywords: marine environment; Bacillus sp.; bioflocculants; polysaccharide; flocculation marine environment; Bacillus sp.; bioflocculants; polysaccharide; flocculation
►▼ Show Figures 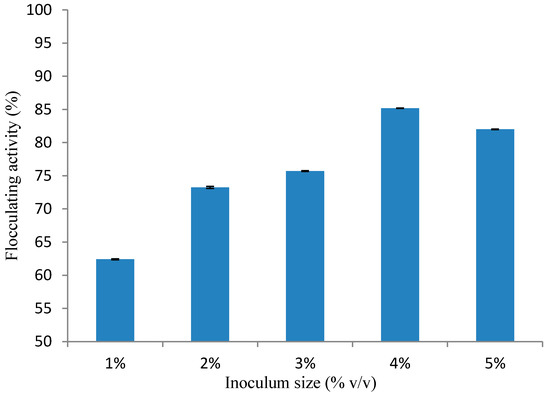