I Walk My Dog Because It Makes Me Happy: A Qualitative Study to Understand Why Dogs Motivate Walking and Improved Health
Previous Article in Journal

Facilitators of Physical Activity: Voices of Adolescents in a Disadvantaged Community

Despite increasing socioeconomic inequalities in the health and well-being of adolescents, the voices of adolescents in disadvantaged communities regarding facilitators of physical activity (PA) have received relatively little attention. In response, the purpose of this study was to illuminate what adolescents in a multicultural community of low socioeconomic status (SES) in Sweden convey concerning facilitators of PA. Adolescents (n = 53, aged 12–13 years) were recruited from a school in a multicultural community of low SES in Sweden. Following an interpretive approach, 10 focus group interviews were conducted to produce data for a qualitative content analysis. When the adolescents mentioned PA, they mostly referred to spontaneous PA rather than organized PA, and expressed that they enjoyed their PA engagement, which they stated was promoted by the variation of PA, available options for PA, their physical skills, and the presence of peers. They reported that social support from family and friends facilitated their PA, and they offered several suggestions regarding how the school environment could better support their PA. From the perspective of self-determination theory (SDT), the results stress the importance of facilitating intrinsic motivation with a supportive PA environment in which adolescents can satisfy their needs for autonomy, competence, and relatedness. View Full-Text
Keywords: child perspective; focus group interviews; low socioeconomic status; multicultural community; self-determination theory; youth child perspective; focus group interviews; low socioeconomic status; multicultural community; self-determination theory; youth
►▼ Show Figures 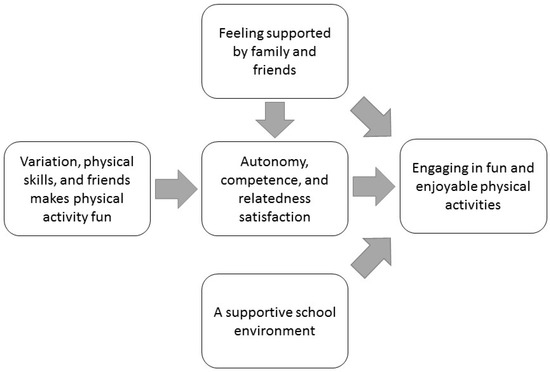