Fluorine is a non-metallic chemical element, widely distributed in the environment in the atmosphere [1], minerals [2,3,4,5], underground [6,7], food [8,9,10] and groundwater [11]. Excessive fluoride concentrations in drinking water and food can lead to endemic fluorosis. In recent years, many measures and processes for the purification of high fluoride water have been evaluated. However the lack of an economic and practical high-fluoride water purification technology has created a technical and economic bottleneck in implementing a strategy safe water for supplying safe drinking water to remote and poor areas. This has restricted the development of the social economy in those areas. The treatment techniques of high fluoride water are mainly reverse osmosis, ion-exchange, chemical precipitation, membrane filtration and adsorption [12]. Biological adsorption methods are widely studied due to the high efficiency of removal fluoride and environmental friendliness [13]. Therefore, investigating the adsorption behavior and mechanism of fluoride ion is of great necessity.
Natural zeolites, the macromolecule chitosan, soil and other natural materials are cheap and easy to obtain, but their adsorption capacity towards fluoride ions is quite low. The adsorption of fluoride ions by natural material is usually limited to materials modified with metal compounds. After modification, the adsorption capacity can be improved, but the modification may cause secondary pollution problems. Sun et al. [14] reported modified zeolite could reduce the concentration of fluoride in wastewater from 10 mg/L to 1.0 mg/L. Hong et al. [15], and Liang et al. [16] reported that the adsorption capacity of chitosan modified by lanthanum was up to 3.67 mg/g, and the chitosan modified by misch metal (an alloy of rare-earth metals) has higher adsorption capacity than chitosan modified by lanthanum. Wang et al. [17] showed that modification of clay with PAC improved its adsorption performance by 62.61%, while also enhancing the adaptability of clay to pH.
Plant residues are inexpensive, renewable and natural absorbent materials widely available in the natural environment. Plants are readily accessible in a lot of polluted areas, such as mining sites and river edges. Therefore, the study of the adsorption of pollutants by plants has gradually become a focal point in sorption science. Nowadays, domestic and foreign research on the adsorption of ions by plants has made some progress. Ma et al. [18] reported fluoride ions were mainly transported to leaves, accounting for 90% of the fluoride content of whole tea plants, while the roots and stems did not accumulate many fluoride ions. He et al. [19] showed that the distribution of fluoride content in spinach was the same as in celery, and in the order old leaf > young leaf > root. Liao studied the tolerance and absorption mechanism of hyperaccumulators towards heavy metals. Wang et al. [20] studied the adsorption characteristics of reed on the heavy metals Pb2+ and Mn2+, which showed different plant organs have different adsorption capacities for different ions. Studies on the adsorption of pollutants by reeds were mostly concentrated on organic pollutants and heavy metals and little on inorganic ions.
Therefore, this study the uptake of fluoride ions by reed from the Weihe River was investigated in terms of its adsorption behavior and the mechanism, looking at different untreated and desugared reed tissues (roots, stems and leaves).

One kind of reed material was obtained from the Chanba Ecological District (Xi’an, China, 34°25′14.45″ N, 109°1′1.46″ E). The untreated root (R-U), stem (S-U), and leaf (L-U) samples were washed with deionized water to remove surface impurities such as dust, dried in the shade, broken into pieces and passed through a 60-mesh sieve, then stored in different clean sealed dehumidification jars.
The desugarization process of the original samples was conducted by acidification with 6 mol/L HCl solution under reflux for 6 h below 100 °C [21], followed by extraction by vacuum filtration, and washing to neutrality with deionized water to obtain desugared root (R-D), stem (S-D), and leaf (L-D) samples (Figure 1), which finally were stored in the same way as the untreated samples above.
The initial fluoride ion solution was prepared by adding KF (Guaranteed Reagent, GR). An ion selective electrode method was used to determine the fluoride ion content.

Isothermal adsorption experiments were carried out at 298 K, 308 K and 318 K. The data was fitted to the Langmuir model. The fitted curves are shown in Figure 4 and the fitted parameters are listed in Table 4.
It can be seen from Figure 4 that with increasing temperature, the equilibrium adsorption capacity increased significantly. This suggested that the adsorption process was endothermic.
The thermodynamic parameters are shown in Table 5. K0 is an adsorption constant that is calculated by the intercept of graph of ln (Qe/Ce) versus Ce.
It can be seen from Table 5 that ΔG is less than 0 and greater than −20, indicating that the adsorption process was mainly a physical adsorption and spontaneous reaction. ΔG gradually decreased with increasing temperature, indicating that the increase of temperature was conducive to the spontaneous adsorption; ΔH > 0 indicated that the process of adsorption of fluoride ions was endothermic; ΔS > 0 indicated that in the adsorption process, the structure of reed surface was changed, so that the solid-liquid interface increased the degree of disorder.

3.2.1. Analysis of the Elemental Composition

The elemental composition and molar ratio of the reed samples are given in Table 6.
It can be seen from Table 5 that the reed residues contained large amounts of the elements C, H, and O. In desugared samples, carbon content was increased, while hydrogen and oxygen contents were decreased compared to the untreated reed residues. The aromatic, polar and hydrophilic index of roots decreased by 0.44, 0.24 and 0.23 units, respectively, after desugarization, and the aromatic index of the desugared reed stems and leaves all decreased by 0.24 units, polar index decreased by 0.12, 0.16 units, hydrophilic index decreased by 0.11, 0.13 units. This may be due to the removal of the sugar from the sample surface after desugarization and thus to removal of polar tissue. The most significant changes occurred in reed roots.
The adsorption coefficient Kd and the partition coefficient KOC [41] of the organic carbon changed significantly during desugarization, and increasing compared with the untreated samples. The increase for the roots was the largest. The increases of the reed stems and leaves was similar. The increase of Kd and KOC values corresponded to the increase in fluoride adsorption capacity of reed residues before and after desugarization.

FTIR spectra of the samples in the range of 4000–400 cm−1 before and after desugarization are presented in Figure 5.
The C-O-C band at 1300–1000 cm−1 indicates one of the main functional groups associated with sugars and carbohydrates as found in the untreated samples. Desugarization led to a significant drop in the band intensity in the 1300–1000 cm−1 wavenumber range of. Stretching vibrations of C=C, C=O and –COOH between 1750–1640 cm−1 were also affected, while the C-H stretching vibration (3000–2850 cm−1) and C-H bending vibration (1465–1340 cm−1) increased in intensity. This indicated that fat and aromatic groups were exposed during desugarization. Polysaccharide material in the plant could hinder the adsorption ability of aromatic groups, therefore, it could concluded that removal of carbohydrates led to easier access to aromatic groups, which improved the adsorption capacity.

The adsorption behavior and mechanism of fluoride ions by untreated and desugared reeds were studied. The following conclusions were drawn:

The fluoride adsorption capacities of reed residues could be increased significantly after desugarization to levels competing with synthetic and metal-modified materials. In order to use this plant material in practical engineering, we will further explore the adsorption properties of fluoride ion in the presence of other anions such as sulphate, chloride, carbonate and bicarbonates that are commonly found.

We are highly grateful to the anonymous reviewers for their valuable comments. This project was supported by the National Natural Science Foundation of China (No. 41372259 and No. 41672224) and the National Key Research and Development Program of China (No. 2016YFC0400701). 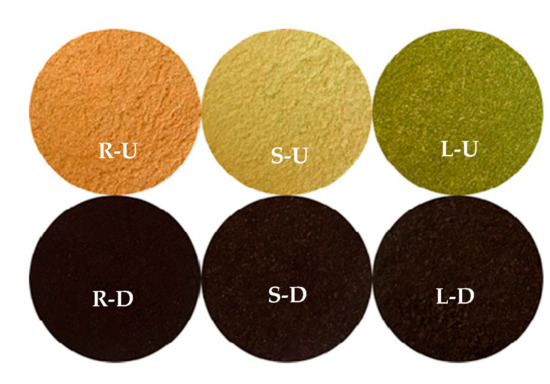 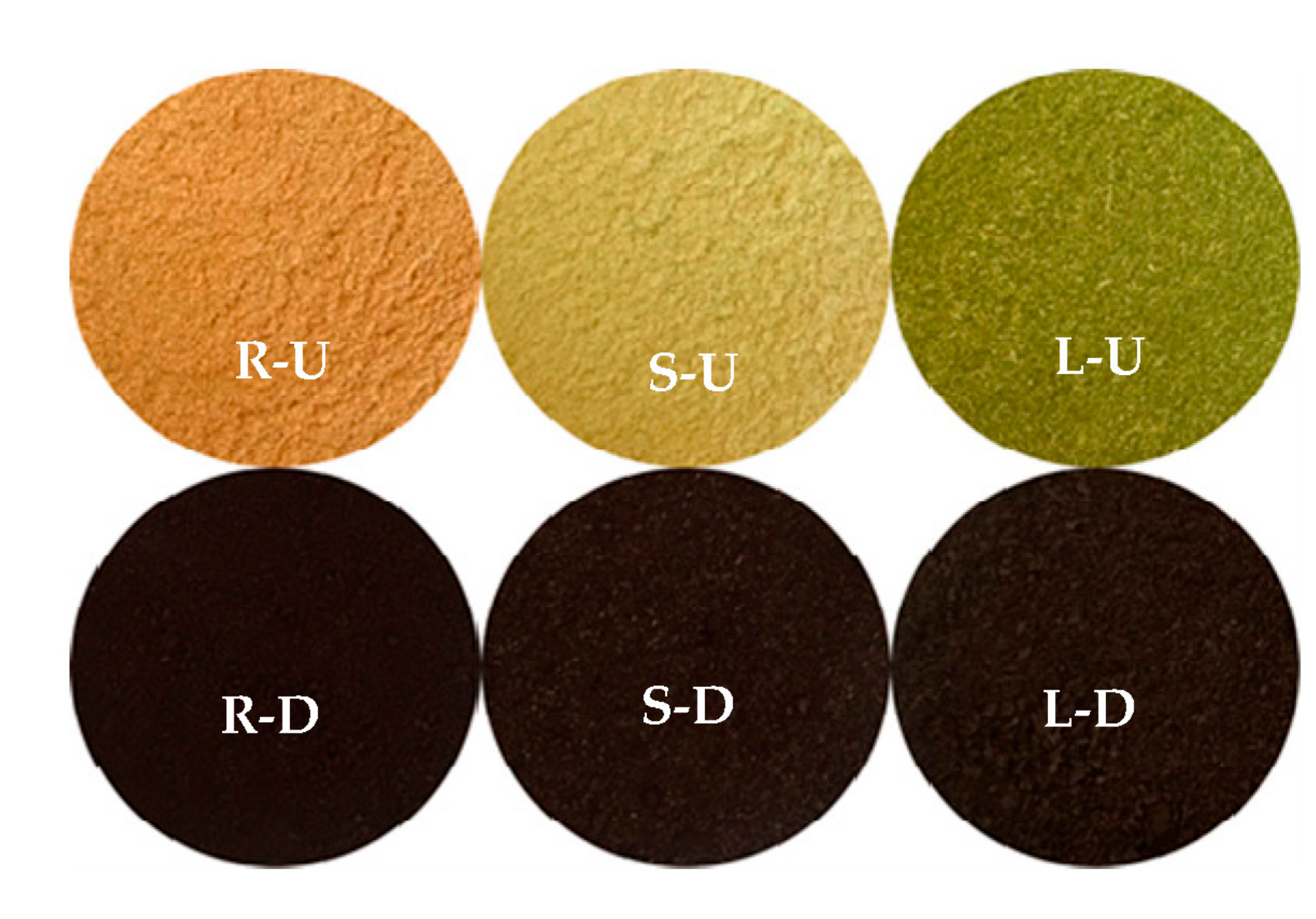 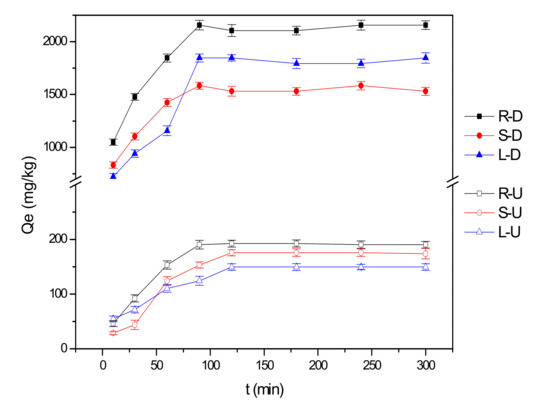 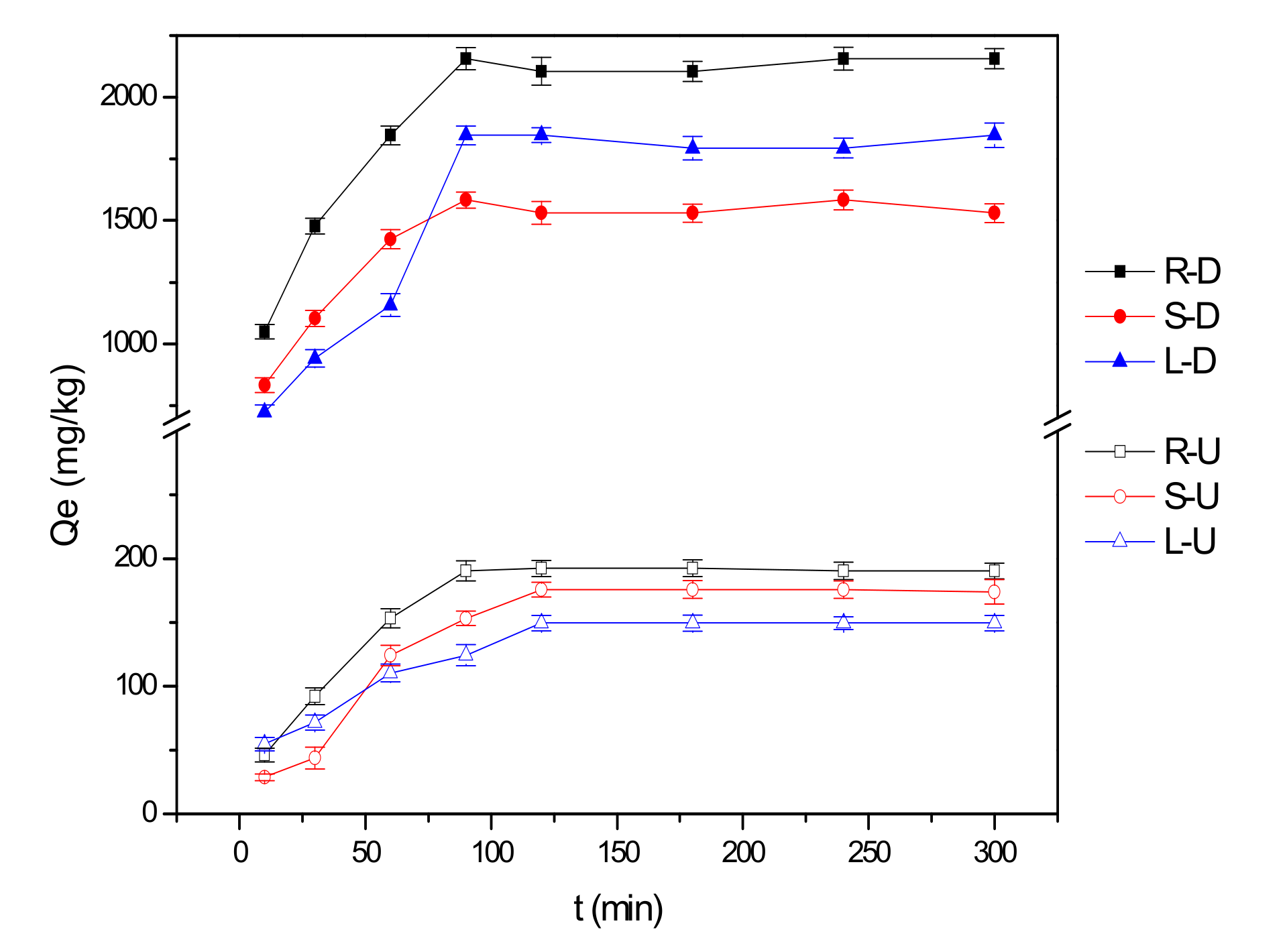 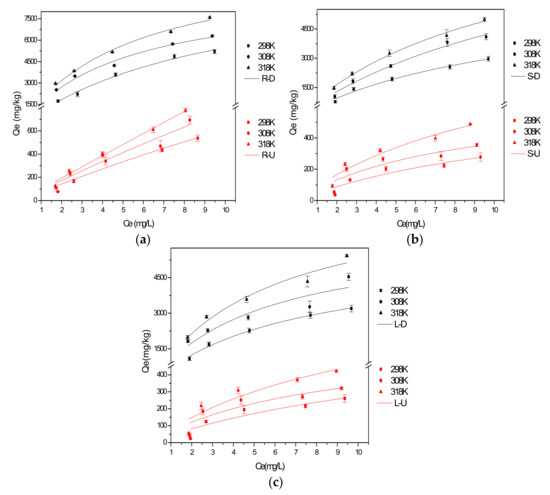 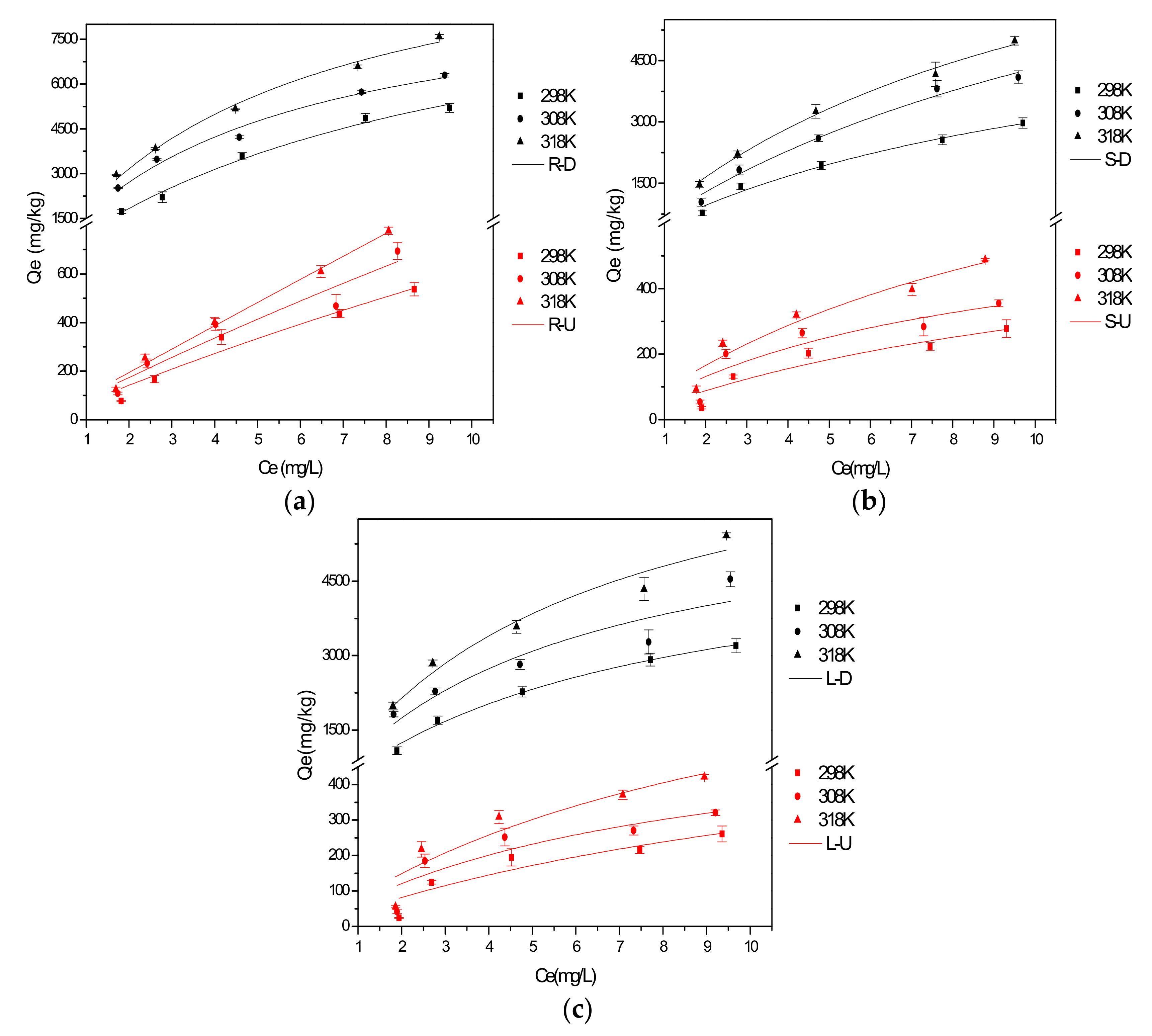 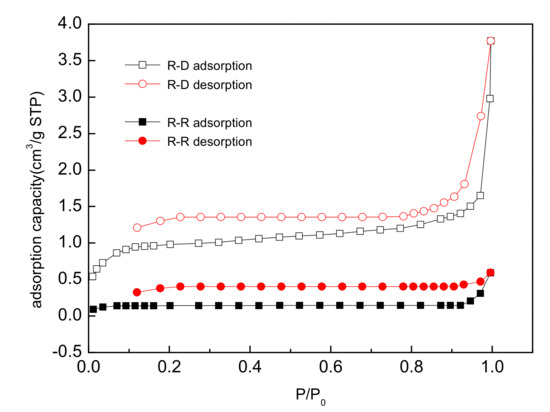 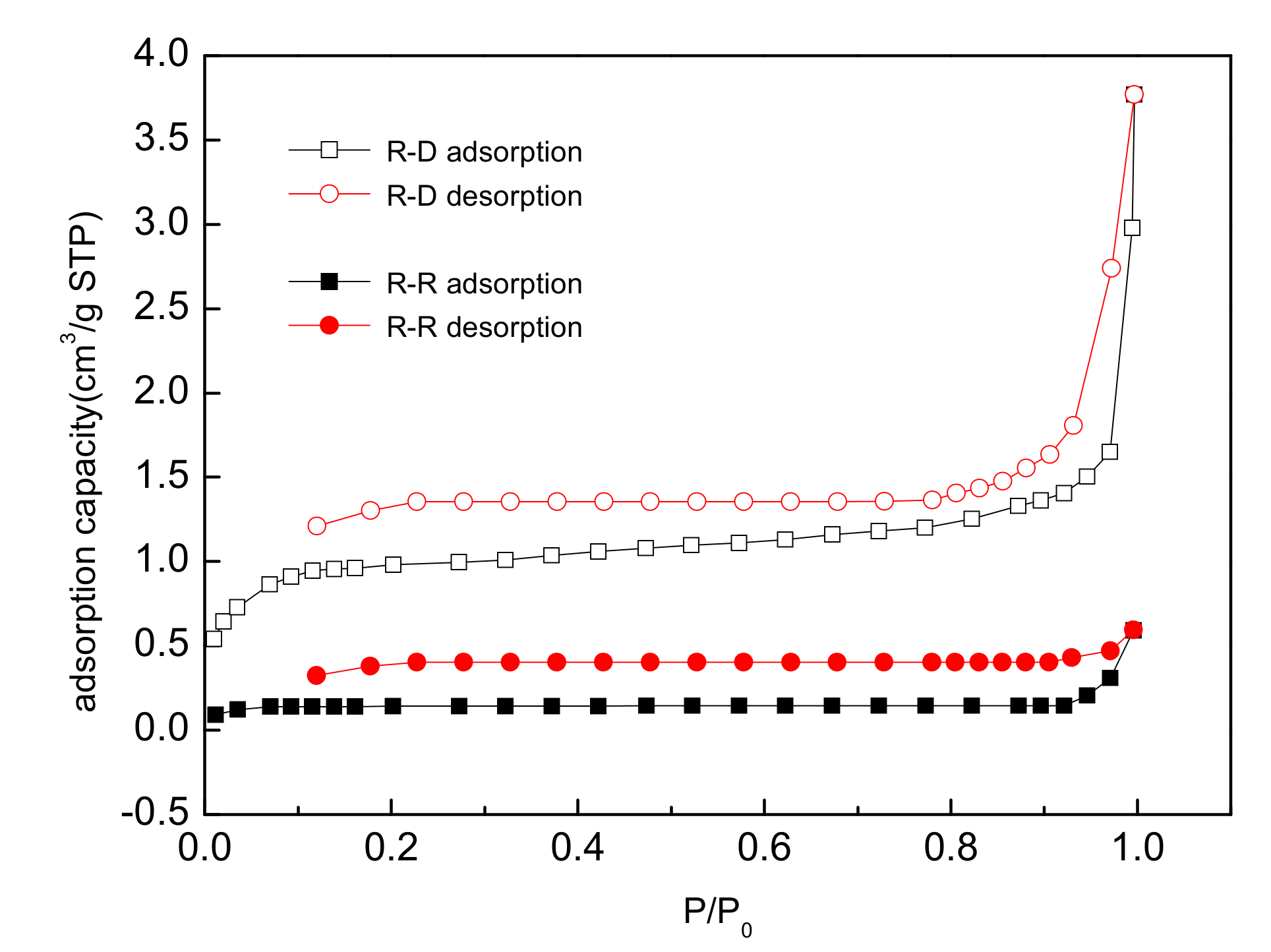