Prevalence and Risk Factors of Human Papillomavirus in Male Patients: A Systematic Review and Meta-Analysis
Previous Article in Journal

A Metagenomic Approach to Evaluating Surface Water Quality in Haiti

The cholera epidemic that occurred in Haiti post-earthquake in 2010 has resulted in over 9000 deaths during the past eight years. Currently, morbidity and mortality rates for cholera have declined, but cholera cases still occur on a daily basis. One continuing issue is an inability to accurately predict and identify when cholera outbreaks might occur. To explore this surveillance gap, a metagenomic approach employing environmental samples was taken. In this study, surface water samples were collected at two time points from several sites near the original epicenter of the cholera outbreak in the Central Plateau of Haiti. These samples underwent whole genome sequencing and subsequent metagenomic analysis to characterize the microbial community of bacteria, fungi, protists, and viruses, and to identify antibiotic resistance and virulence associated genes. Replicates from sites were analyzed by principle components analysis, and distinct genomic profiles were obtained for each site. Cholera toxin converting phage was detected at one site, and Shiga toxin converting phages at several sites. Members of the Acinetobacter family were frequently detected in samples, including members implicated in waterborne diseases. These results indicate a metagenomic approach to evaluating water samples can be useful for source tracking and the surveillance of pathogens such as Vibrio cholerae over time, as well as for monitoring virulence factors such as cholera toxin. View Full-Text
Keywords: cholera; metagenomic analysis; bioinformatics; whole genome sequencing; principle components analysis; water quality; environmental sampling; Haiti cholera; metagenomic analysis; bioinformatics; whole genome sequencing; principle components analysis; water quality; environmental sampling; Haiti
►▼ Show Figures 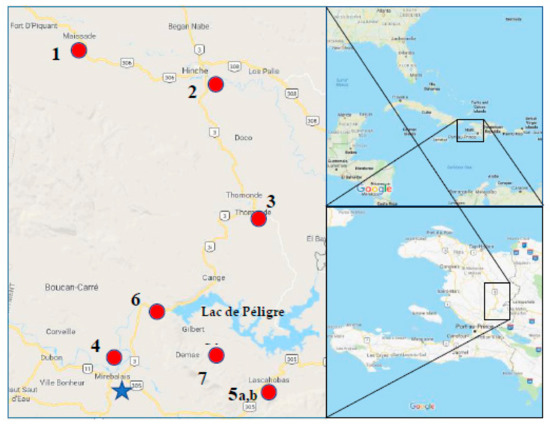