You Can’t Find Healthy Food in the Bush: Poor Accessibility, Availability and Adequacy of Food in Rural Australia
Next Article in Special Issue

Determinants of Spatial Heterogeneity of Functional Illiteracy among School-Aged Children in the Philippines: An Ecological Study
Previous Article in Journal

Data were derived from the KLOSA, which was conducted by the Korean Employment Information Service. The KLOSA is a nationally representative longitudinal survey of the household-dwelling population aged 45 and older in Korea using multi-stage, stratified probability sampling [30]. A total of 10,254 individuals completed interviews at baseline (2006). Interviews were conducted every even-numbered year up to 2014, which resulted in five survey waves. At each wave, information regarding education, income, assets, employment, lifestyle, health status, and cognitive function was collected. The follow-up rate for each wave was 86.6%, 80.3%, 76.2%, and 72.8% for the 2008, 2010, 2012, and 2014 surveys, respectively [30]. The current study selected 7299 adults with normal cognitive function at baseline, which was defined as a Korean version of the Mini-Mental State Examination (K-MMSE) score ≥24. Given missing covariates at baseline, 593 participants were excluded from the study. Of 6706 eligible respondents, 5948 (88.7%) provided at least one memory score and 4453 (66.4%) provided four memory scores at all assessments during the follow-up period (after the baseline survey).

Cognitive function measured by K-MMSE scores was used as a dependent variable. The K-MMSE, a structured questionnaire to measure global cognitive performance and screen for dementia, consists of 11 items in seven categories including orientation for time, place, and person, registration of three objects, attention and calculation, recall of three words, language, and visual construction [31]. Total K-MMSE scores range from 0 to 30, with normal cognitive function defined as score of 24 or greater [31,32]. The K-MMSE was validated elsewhere [32]. The present study used K-MMSE scores over the eight-year follow-up as outcome measures.

We used multi-level mixed models to test the hypothesis that individuals with higher baseline social activity would experience a slower rate of decline in cognitive performance during the follow-up period. The multi-level models allowed us to examine the trajectory of cognitive performance based on the level of baseline social activity, the average rate of cognitive performance over time.
First, to assess the overall change of K-MMSE scores related to increasing age, the difference between actual age and an age of 45 (age-45) was included. However, even if baseline social activity did not relate to the change of cognitive function in middle age, it could affect the change of cognitive function in old age (older than 65). Therefore, a spline at the age of 64 was introduced to assess the change of K-MMSE scores related to increasing age in adults over the age of 65, indicating that the difference between actual age and the age of 65 for adults older than 65 (adults under 64 had a value of 0) was included. In the models, the changes over time for adults over the age of 65 was assessed by the sum of two coefficients of age-45 and age-65. Second, to assess the difference based on the level of social activity in rate of change of cognitive performance over the years, the interactions of social activities with the variables of age-45 and the variable of age-65 were introduced. The decline (or increasing) rate in MMSE scores in adults over the age of 65 was assessed as the sum of between coefficients of two interaction terms. The present study analyzed the pooled sample and the sample stratified by gender, which resulted in three regression analytic models. In addition, we used the Wald test to examine whether the association of social activity with cognition depended on gender. Given that correlations between social activities were weak, ranging between 0.023 and 0.207, the association of four types of social activity with cognition was assessed in the same analytic model. All analyses were conducted with SAS 9.0 (SAS Institute Inc., Cary, NC, USA). The PROC MIXED procedure was used for multi-level linear mixed models.

This research was funded by the Basic Science Research Program through the National Research Foundation of Korea funded by the Ministry of Education, Science and Technology [2016R1D1A1B03935971]. 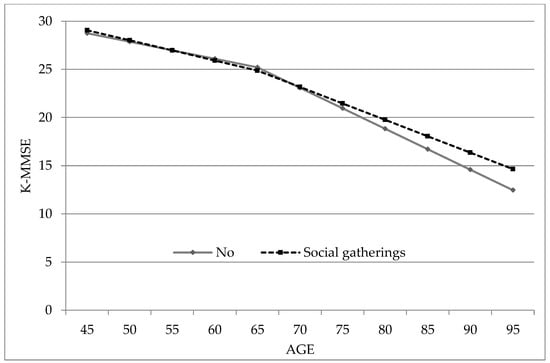 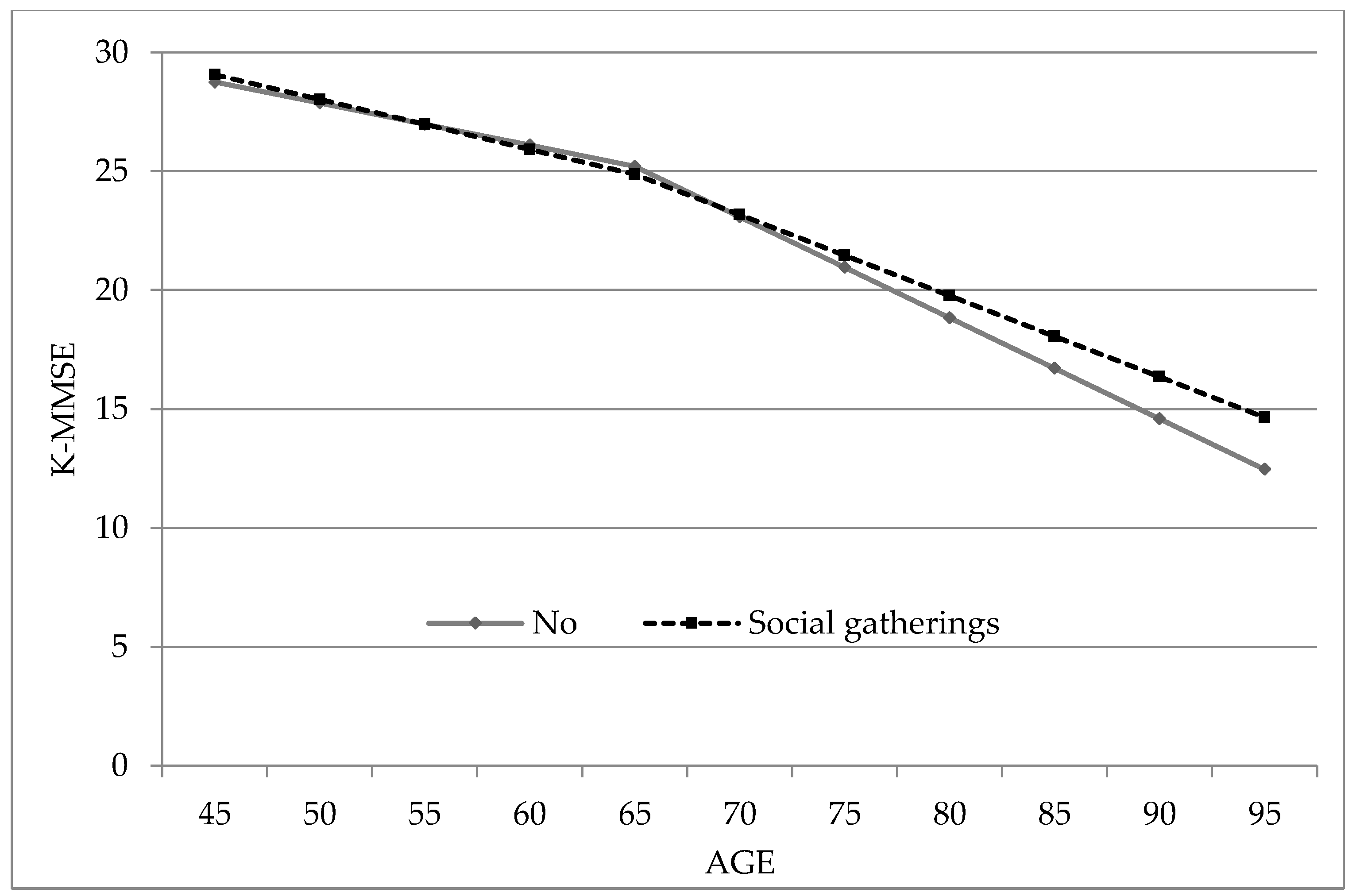