Agent-Based Modeling for Super-Spreading Events: A Case Study of MERS-CoV Transmission Dynamics in the Republic of Korea

Epidemiological Trend of Typhoid and Paratyphoid Fevers in Zhejiang Province, China from 1953 to 2014

Background: The incidences of typhoid and paratyphoid remain high and these diseases still pose a public health problem in China and in Zhejiang Province in particular. This study aimed to investigate the trend of typhoid and paratyphoid in Zhejiang Province from 1953 to 2014 and to provide a theoretical basis for the prevention and control of these diseases. Methods: Included in this study were compiled epidemiological data of typhoid and paratyphoid cases in Zhejiang from 1953 to 2003 and epidemiological data of those from 2004 to 2014 registered in the China Information System for Diseases Control and Prevention. Description methods were employed to explore the epidemiological characteristics, including long-term trend, gender distribution, age distribution, and occupation distribution. Incidence maps were made to represent the annual average incidences for each municipality. Spearman’s rank correlation was performed to detect the correlation between incidence and average elevation, and circular distribution was calculated to identify the seasonality and peak days of the diseases. A p-value of <0.05 was considered statistically significant. Results: A total of 182,602 typhoid and paratyphoid cases were reported in Zhejiang Province from 1953 to 2014, and the average annual incidence was 7.89 per 100,000 population. The incidence in 2014 decreased by 93.82% compared with that in 1953 and by 95.00% compared with the highest incidence rate. The average incidence before 2003 was negatively correlated with the average elevation of each region in Zhejiang province (r < 0, p < 0.05), but there was no statistically significant correlation from 2003. The peak period of diseases fell in the months from April to October every year. The incidence among the population group aged over 35 rose gradually but declined sharply among those between 20 and 34. Conclusions: The incidence of typhoid and paratyphoid decreased in Zhejiang Province from 1953 to 2014 but remained high in some regions. Proper measures for prevention and control are warranted in the southeast coast areas and for high-risk populations. View Full-Text
Keywords: typhoid; paratyphoid; epidemiological characteristics typhoid; paratyphoid; epidemiological characteristics
►▼ Show Figures 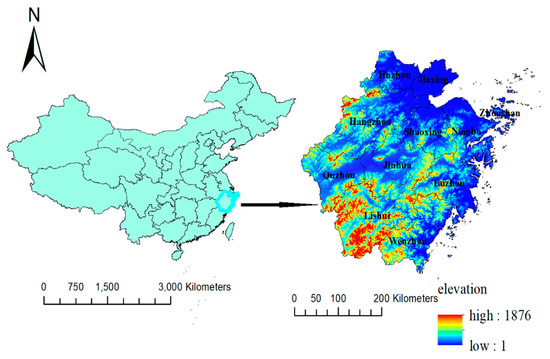