A Media-Based School Intervention to Reduce Sexual Orientation Prejudice and Its Relationship to Discrimination, Bullying, and the Mental Health of Lesbian, Gay, and Bisexual Adolescents in Western Canada: A Population-Based Evaluation
Next Article in Special Issue

The Epidemiology of Food Allergy in the Global Context

The prevalence of food allergy (FA) has not been estimated at a population level in Central American countries and, consequently, the magnitude and relevance of the problem in the Central American region remains unknown. Thus, our aim was to evaluate the parent-reported prevalence of FA in a population of schoolchildren from the Central American country El Salvador. A Spanish version of a structured questionnaire was utilized. Five hundred and eight (508) parents returned the questionnaire with valid responses (response rate, 32%). The estimated prevalence rates (95% CI) were: adverse food reactions 15.9 (13.0–19.3), “perceived FA, ever” 11.6 (9.1–14.6), “physician-diagnosed FA, ever” 5.7% (4.0–8.0), “immediate-type FA, ever” 8.8% (6.6–11.6), “immediate-type FA, current” 5.3% (3.6–7.6), and anaphylaxis 2.5% (1.5–4.3). The most common food allergens were milk (1.7%), shrimp (1.3), chili (0.7%), chocolate (0.7%), and nuts (0.3%). Most of the “food-dependent anaphylaxis” cases (60.5%) sought medical attention, but only one case reported the prescription of an epinephrine autoinjector. Mild and severe FA cases are not uncommon among Salvadoran schoolchildren and both the prescription of epinephrine autoinjectors by healthcare personnel and the use of the autoinjectors by anaphylactic individuals should be encouraged. View Full-Text
Keywords: food allergy; prevalence; parent-reported; schoolchildren; anaphylaxis food allergy; prevalence; parent-reported; schoolchildren; anaphylaxis
►▼ Show Figures 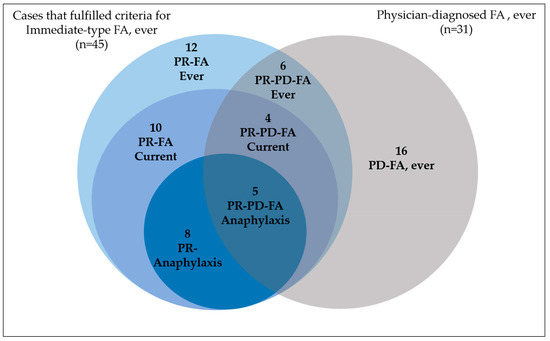